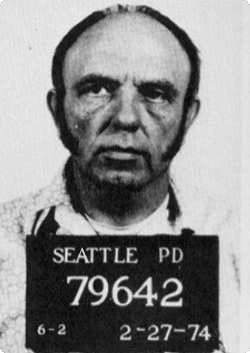 Harvey Louis Carignan is an American serial killer and rapist who was nicknamed “Harv the Hammer,” ‘Want-Ad Killer’. He was born on May 18, 1927, in Fargo, North Dakota and he is currently serving a sentence for the murders of two women. In 1949 in Anchorage Alaska he was convicted of rape and murder while stationed in the U.S. Army but was paroled in 1960 for the crime.

Harvey Louis Carignan was born to an unwed twenty-year-old mother. The young boy, however, did not live with his mother for long after she got married. The child moved from one family member to the next. Harvey was made to live with an aunt and uncle in North Dakota; then, moved to Minnesota with his grandmother before returning to live with his mother at age 10. He subsequently suffered a bedwetting problem. Carignan was diagnosed as suffering childhood Chorea in a reform school in Mandan. Not surprisingly, Carignan experienced severe difficulties while he was attending school in Mandan because he believed that female employees had sexually abused him. He left the reform and enlisted in the U.S. Army when he was 18.

Carignan raped and murdered 57-year-old Laura Showatler on July 31, 1949, while stationed at Fort Richardson in Anchorage, Alaska. Less than two months later, Carignan attempted to rape Dorcas Callen but she managed to escape from him and informed the authorities. Callen and another eyewitness, John Keith identified Carignan in a line-up. On September 17th, Carignan was taken into custody for the murder of Laura where he provided officials with a handwritten confession but did not say anything about a murder. He then orally confessed to killing her during his trial. In 1950 he was charged and convicted of first-degree murder by capital punishment and sentenced to death by hanging. His death sentence was overruled in 1951 by the Supreme Court and was transferred to Alcatraz in 1952 where he served his sentence until April 2, 1960, when he was paroled.

It was a dark October evening in 1972 when nineteen-year-old Leslie Laura Brock of Bellingham, Washington was found dead. Her cause of death was the result of several blows to the head. Witnesses claimed that they saw her get into Harvey Carignan’s silver truck.

On May 1, 1973, Kathy Sue Miller applied for a job at a service station that Harvey Carignan advertised he was leasing. When the 15-year-old showed up, Carignan sexually assaulted and killed her. Kathy’s body was discovered nearly two months after she went missing. Two boys walking through a forest near a north Washington Indian reservation came across her remains, partially wrapped in plastic and naked. She had been beaten over the head with a hammer that left nickel-sized holes in her skull.

On the 9th of September 1973, Carignan picked up Jerri Billings who was just thirteen years of age and a stranger to him. He force her to perform sexual acts on him while he assaulted her with hammer blows. After the attack, Carignan released his victim and she did not mention the event until several months later because she was so traumatized by it.

Harvey Carignan started dating and eventually living with Eileen Hunley after his ex-wife left him. Their relationship. Eileen broke off the relationship in August of 1974. She disappeared a few weeks later on Aug 10th. Her remains were mutilated and she’d been sexually assaulted with a tree branch by the time her body was discovered 5 weeks after her disappearance.

On Sep 14, 1974, Harvey Carignan picked up Gwen Burton who he would then rip off her clothing, choke her into semi-consciousness, and sexually assaulted her with a hammer. He dumped her body in a nearby field but she survived and was able to craw to the roadside for help.

Four days later, he picked up Versoi and Diane Flynn. He forced them to perform oral sex and would beat them if they didn’t follow his commands. The two girls were able to escape when Carignan stopped for fuel.

Two days later, Kathy Shultz did not show up at her classes. Her body was found the next day by hunters in a cornfield with hammer blows in the skull.

The Minneapolis police started to communicate with their counterparts in Washington and like many before them, the survivors were able to positively identify Harvey as the man who assaulted them in the photo lineup.

In February of 1975, Carignan was on trial for the attempted murder and aggravated sodomy of Gwen Burton. He had to plead not guilty because of insanity as he claimed God told him to kill those women but the jury declared him guilty sentencing him to a maximum of forty years in prison since criminals in Minnesota may not be sentenced to a term exceeding forty years. The other trials and sentences were mere formalities like 30 years for the assault on Jewry Billings; 40 years for the murder of Eileen Hunley; and 40 years for the murder of Kathy Schultz.

He is serving his prison sentence at the Minnesota Correctional Facility-Stillwater in Bayport, Minnesota.