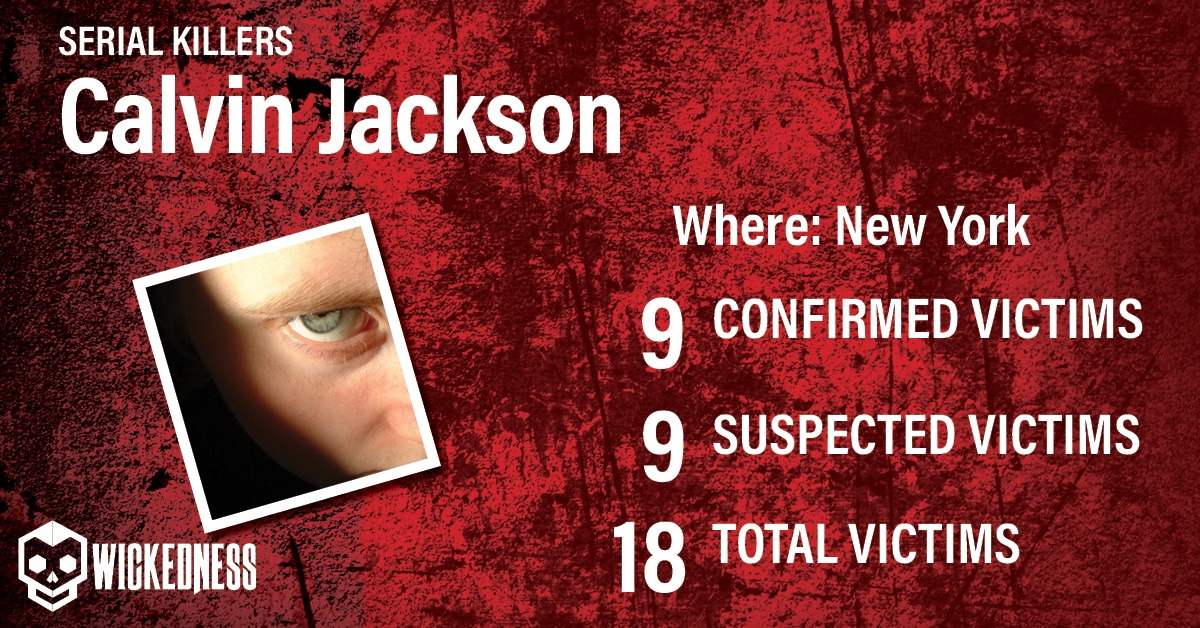 The serial killer and rapist Calvin Jackson (born March 5, 1948, in Buffalo, New York) was responsible for the killings of 9 women including sculptor Eleanor Platt in Manhattan’s West Side between 1973 and 1974. It seemed like their deaths came from natural causes or accidents until Calvin was arrested and confessed to the killings. He was convicted of murder in July 1976 and sentenced to 4 life imprisonment terms with a chance of parole.

Calvin Jackson was born in a poor family. When he was young, he got addicted to drugs and later went to leading a life of crime. He dropped out of school after 10th grade and started getting involved in criminal activities and robbery cases which landed him 5-year imprisonment. He was paroled in the late 60s, and he moved to New York City and married Valerie Coleman and they got married. A few years after marriage, Calvin started experiencing difficulties in finding jobs due to disciplinary issues and it forced him to look for odd jobs which made him do burglaries on several occasions.

In 1970, Calvin was charged with possession of drugs and spent 90 days in jail. In the following years, he was arrested three more times for drug possession and theft but each time managed to get off with short prison terms. In early 1972, after a move to Manhattan’s West Side which at the time faced poverty and crime, Calvin cleared himself from his drug addiction and took on a job as a porter. Amongst his friends from those years, he is spoken extremely positively of by most.

The youngest victim of the serial killer Calvin Jackson was only 39 years old when her body was discovered. On April 10th, 1973, he broke into the hotel room where Theresa Jordan lived. He smothered her with a pillow, then robbed and defiled her body before stealing her belongings.

Calvin Jackson also murdered 6-year-old Kate Lewisohn, on July 19, 1973. A caller found Kate trussed up on the bed, her small apartment burgled. After being raped, she had been strangled and beaten to death and she had a skull fracture.

On April 24, 1974, Calvin Jackson brutally murdered 60-year old Mable Hartmeyer. Authorities at the time overlooked her death, attributing it to arteriosclerosis. Later investigation revealed a much different picture when it turned out the killer had stolen some of his victim’s possessions and also been raped and strangled her.

Five days later on April 29, 1974, 79-year-old Yeria Vishnefsky was found dead in the room of a local hotel. She had been raped, bound with her nylon stockings, and a butcher knife plunged to the hilt in her back.

On June 8, Jackson murdered yet another victim at the Park Plaza Hotel. 47-year-old Winifred Miller was smothered with a pillow and then raped.

On June 19th, Jackson killed Blanche Vincent. The 71-year-old was strangled on the Park Plaza Hotel’s hotel grounds, after which her body was raped.

On July 1, 1974, Jackson entered the hotel room of Martha Carpenter. He stole money and other valuables, proceeded to strangle the 69-year-old, and then raped her dead body.

The next victim of Calvin Jackson was a famous sculptor by the name of Eleanor Platt, who was on August 30 found dead in her room at the Park Plaza Hotel.

On September 12, Jackson burgled into one of the apartments in a building located next to the Park Plaza Hotel. He raped and strangled Pauline Spanierman, 69, and took her television.

A neighborhood eyewitness recounted seeing a man on the fire escape carrying down a television around three o’clock in the morning. Detectives sprang into action then, scouring door to door until they found the missing set from a neighbor’s apartment which happened to belong to Calvin Jackson. Police found that he worked as a janitor at the Park Plaza Hotel and he was arrested. He admitted to the nine murders and he said to the detectives that he often lingered with his victims for an hour or more eating food from their refrigerators and watching his victims very carefully to make sure they were dead.

Calvin Jackson was convicted of nine murders and other crimes on May 25th, 1975 by a jury verdict. He was sentenced to four life imprisonment terms on July 6, 1976, with a chance of parole.