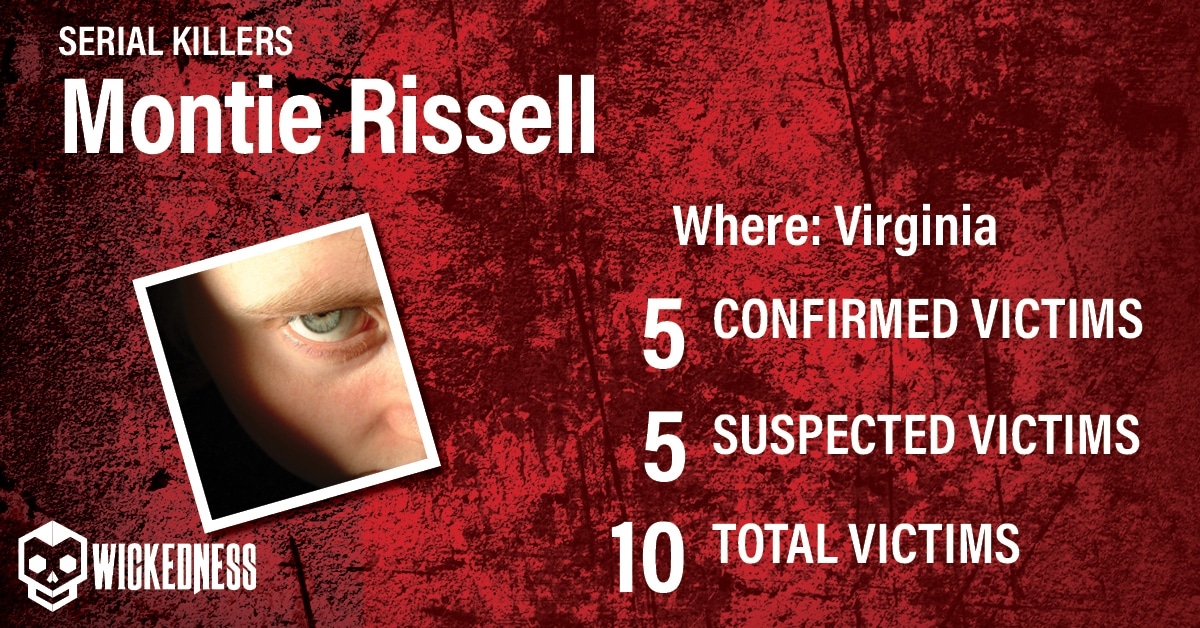 American serial killer Montie Ralph Rissell was born in Wellington, Kansas in November of 1958. He moved to Alexandria, Virginia where he would commit 5 different murders between 1976 and 1977. His crimes would make him one of the most infamous serial killers in history at his trial.

Montie Rissell lived in his hometown of Wellington, Kansas for the first seven years of his life. He lived with his mother, who was married and divorced twice by the time he was 12, as well as two older siblings: a brother, Harold, and a sister. Rissell’s biological father left when he was 7 years old.

As a teenager, Montie Rissell was notorious for his crimes involving sexual harassment and robbery. It all began at age 14 when he committed his first rape. He was charged with various minor crimes, and in 1973 he was institutionalized. After his release two years later, he attempted to rob a woman at knifepoint in an elevator just blocks from his home; he received a five-year suspended sentence for this crime and dropped out of T. C. Williams High School when he was seventeen years old.

Montie Rissell committed his first murder on August 4, 1976. He saw his ex-girlfriend with another man and decided to take his anger out on a 26-year-old prostitute living in the same apartment complex as himself, Aura Marina Gabor. Rissell claimed that he was shocked by her when she tried to defuse the situation by making the sex act seem enjoyable, by trying to make him feel good. It just made him even angrier and in the end, he decided to kill her by drowning her in a nearby ravine.

In March 1977, Montie Rissell killed his second victim. He raped and stabbed 22-year-old Ursula Miltenberger, a McDonald’s manager trainee. Her body was found on March 6 in Fairfax woods.

Montie Rissell killed his third victim, 27-year-old Gladys Ross Bradley in April 1977. Deliberately waiting outside her house with a steak knife from his mother’s kitchen, Rissell raped Gladys twice before dragging her by her feet to a nearby creek where he drowned her. Her body was discovered on April 29, 1977.

The fourth murder victim was Aletha Byrd. She was 34 years old and an employee of the Woodward & Lothrop department store at Tyson’s Corner Center. She had been reported missing almost one month before being found dead with multiple stab wounds on May 17th in a wooded area.

The last murder committed by Montie Rissell was that of 24-year-old Jeanette McClelland. She worked as a proofreader in graphics design at Bru-El Graphics. On May 5th, 1977, her body was found stabbed 100 times in a culvert along the Shirley Highway.

On May 18, 1977, police, who had Montie Rissell under surveillance as a suspect, searched his vehicle and found Byrd’s personal belongings. The authorities later confirmed that Rissell’s fingerprint was found on Miltenberger’s car; this led to Rissell confessing that he killed all five of the women in question. Shortly before he was to stand trial for these crimes, Rissell pleaded guilty to the murder charges. He was only 18 years old when he received five consecutive life sentences for his offenses.

While still in prison, convicted murderer Montie Rissell wrote a 461-page manuscript detailing his gruesome crimes. Rissell became eligible for parole in 1995, however, family members of the victims and the community at large protested against this. Since then, Rissell had been granted a parole hearing each November and he has been denied parole each time. He’s currently incarcerated at Pocahontas State Correctional Center in Virginia.