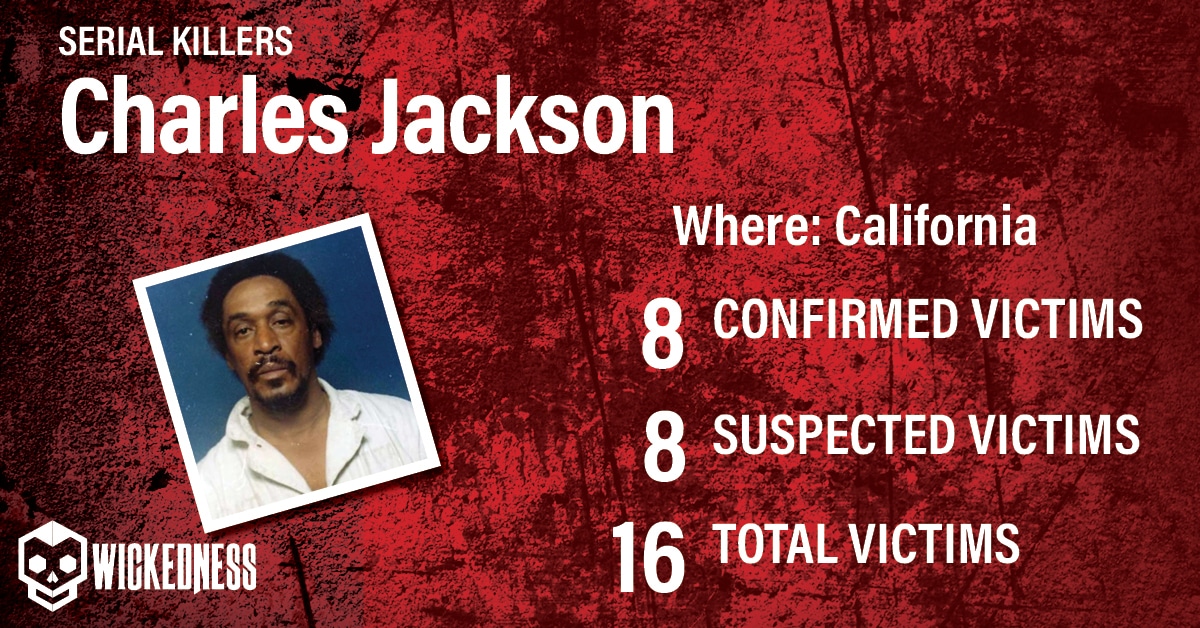 American serial killer Charles Jackson Jr. was born on February 12, 1937, in Louisiana. “The East Bay Slayer” killed as many as seven women and one man between 1975 and 1982, with most of his crimes being committed in Alameda County, in the San Francisco Bay Area. Exposure of more of his victims occurred only a few years after his death, based on results from DNA profiling.

Charles Jackson grew up in a socially disadvantaged household. His father suffered from alcoholism and turned violent towards them. By the early 1950s, he dropped out of high school due to material difficulties. He was frequently found in the streets and started doing criminal activities. Jackson was charged with a theft offense at the age of 16, and his criminal record only got worse. Jackson moved to California with his mother in the late 1950s. He was repeatedly arrested on charges of burglary, rape, assault, and molestation of minors over the next 20 years.

The last time Jackson was out of prison was on September 12, 1981, and then began working as a Handyman and doing other odd jobs.

In January of 1982, Charles Jackson raped, strangled, and stabbed Joan Stewart near Montclair. The 44-year old was a college biology teacher from San Francisco. The victim’s body was discovered three days later and police noted that a piece of Canadian bacon was dropped nearby the scene but knew it could not have belonged to the victim or suspect. This is because Stewart was a vegetarian. This led investigators to their conclusion that Stewart must have been killed by someone who was eating when they attacked her.

A vehicle that a witness saw parked in the vicinity when Stewart was attacked was deemed to belong to one Charles Jackson. Police questioning Jackson’s mother whom he shared a house with, discovered that every morning she wraps him some Canadian bacon to take with him when he leaves for work. The number plate and the piece of bacon left at the crime scene proved sufficient evidence for the police to officially charge Jackson with Stewart’s murder.

Charles Jackson was found guilty and received a sentence of life imprisonment in 1983 as punishment for his crime. In 1985, after evidence of court-related error emerged, Jackson’s second trial started where he was again sentenced to life imprisonment.

In 1998, police departments conducted DNA testing on unsolved cases that dated between the early 1990s to the 1970s around the East Bay Area. In 1999 progress was made when Charles Jackson’s DNA matched biological evidence left at a double homicide in 1981 in which Henry Vila and his wife Edith were killed. The bodies of the elderly couple were discovered on November 22nd. They had been stabbed and Edith had been sexually attacked by her attacker.

When Charles Jackson was informed by investigators that his DNA matched the DNA found at the crime scene, he refused to come out of his cell and speak with them. Investigators did not press charges on Charlie for the two other murders, choosing instead to focus their attention on the current case. However, on February 15th, 2002, Charles Jackson died of a heart attack in prison at 65-years-old.

Investigation continues after his death

His death didn’t slow down the investigation at all; in 2005, based on these results, Jackson’s involvement was revealed in more murders:

The 19-year-old was sexually assaulted and stabbed to death in her Oakland home in June 1975.

The 27-year-old was stabbed and sexually assaulted in August 1975 at her Montclair home.

The 11-year-old’s body was found by her mother on April 22, 1978, in nearby bushes in a field in Moraga, near Buckingham.

The 37-year-old was stabbed in her home on December 4, 1981, in her Oakland’s Trestle Glen neighborhood. Her daughter found her alive but she passed away on the way to the hospital.