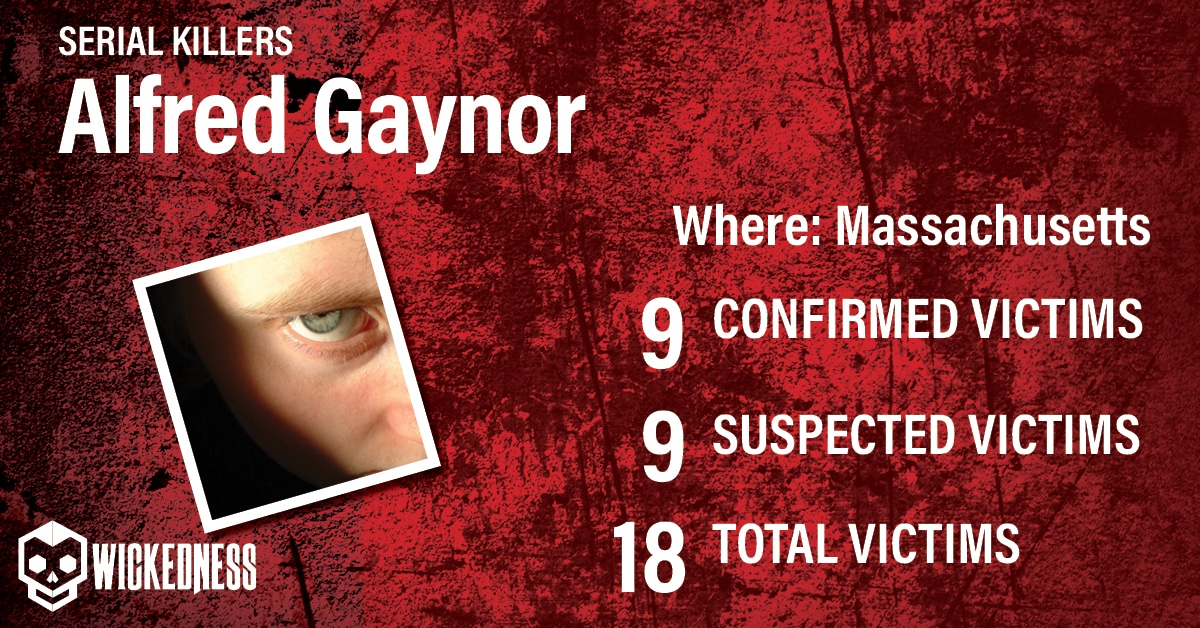 Alfred Gaynor was a former handyman and crack addict who found odd jobs in the 90s. He developed an unhealthy relationship with crack cocaine. After this unfortunate turn of events, he lost his job as a handyman and fell back into homelessness once more. He met several of his victims in a mutual search for crack cocaine and robbed some for drug money after strangling and raping them- resulting in their death. He killed 9 women between April 1995 and February 1998.

Alfred Gaynor began a killing spree that terrorized Springfield in the mid-1990s. According to his confession, it all began when he raped and murdered Vera Hallums in April 1995. The 65-year-old woman was attacked in her home where she lived by herself. She was bound and gagged before being sexually assaulted, robbed of her jewelry before being mercilessly beaten to death with a hammer.

Alfred Gaynor confessed to killing 20-year-old Amy Smith by strangulation. It is thought that she had been dead for a week when authorities found her in the apartment at 280 Dwight St. Extension, she left behind a 22-month-old daughter who sadly died of starvation and dehydration.

Alfred Gaynor confessed to killing Jill Ann Ermellini, who was 34 years old. Her remains were found in a truck cab at an auto body yard on June 16, 1997. Ms. Ermellini worked as a waitress and bartender at local establishments and most recently had been living with her mother, Taiga Ermellini, 63.

Gaynor also confessed to killing Robin M. Atkins. Atkins was 29 years old and was found strangled, bound, and gagged in a downtown alley on October 25th, 1997.

Yvette was then the girlfriend of Alfred was found dead at her Healy Street apartment on Nov. 15, 1997. She was 33 years old and her body was found propped against the bathroom door, partially clothed.

On Monday, February 18th, 1998, Joyce Dickerson-Peay was viciously murdered by Alfred Gaynor by being strangled to death. Joyces’ family was worried about her. The police had even gotten involved at this point. Several witnesses claimed to have seen Joyce in the company of Alfred right before she disappeared and Gaynor was brought in by the police for questioning about the murder. The police had a breakthrough when they discovered Joyce’s body and it was identified through DNA evidence that belonged to Alfred Gaynor himself. On the other hand, he couldn’t say where was he during the time of the murder. Alfred Gaynor got arrested for murder on April 10th, 1998, and was charged with murder.

Perhaps one of the most memorable moments from a legal trial involving Mr. Gaynor is the events that occurred on April 30, 1998, during one of the court hearings when Eric Downs, son of victim Jesse Downs, attacked him with a chair. At the time, authorities were uncertain as to how to deal with this unexpected turn of events so they merely took Downs into custody briefly. He was arraigned shortly thereafter on accounts of assault and criminal contempt for his outburst in court.

In 2000, Alfred Gaynor was convicted for murdering four women after the prosecution identified him as the murderer of Joyce Dickerson-Peay, JoAnn Thomas, Rosemary Downs, and Loretta Daniels based on DNA evidence and forensics. The prosecution said Alfred Gaynor offered his victims cocaine before sodomizing and choking them to death. As a result, he was given four life sentences without the chance of parole.

Alfred Gaynor was eventually convicted in the Massachusetts area. Gaynor admitted that he killed Vera E. Hallums, Jill Ann Ermellini, and Robin M. Atkins in 2008 during a plea deal with his nephew Paul L. Fickling, who had been sentenced to life in prison for the murders of Amy Smith on November 17, 1998. In exchange for testifying against Gaynor at trial, Fickling’s trial was overturned in 2010 and he will receive a reduction in his sentence from life to 19-20 years minus the 14 years already served! As for Alfred Gaynor, he got five more life sentences and continues to rot in prison until death claims him.

Alfred Gaynor is currently serving his sentences at the Souza-Baranowski Correctional Center; while in prison, he had plenty of time to devote to his craft: painting. While it might seem like Alfred was able to profit from this (which has been met with outrage from relatives of the victims) it’s not likely and makes sense why Alfred would paint: for therapeutic reasons. Stress and anxiety reduce when art is a creative outlet for Gaynor.