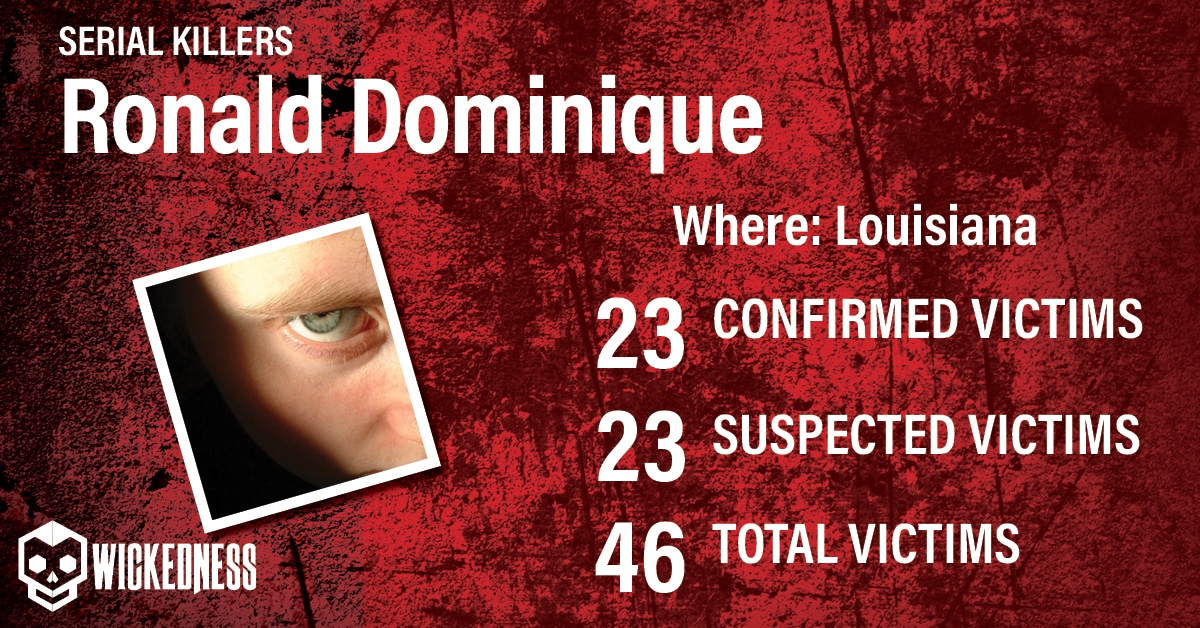 Ronald Joseph Dominique, born in 1964 in Bayou Blue, Louisiana, is an American serial killer accused of slaying over 23 men throughout Terrebonne Parish, Lafourche Parish, Iberville Parish, and Jefferson Parish over a decade since 1997.

On 23rd September 2008, Ronald Joseph Dominique was sentenced to 8 life sentences in prison after he confessed to raping and killing his male victims over 10 years. He pleaded guilty to first-degree murder as part of a plea deal to avoid the death penalty. He is currently incarcerated at Angola state penitentiary.

Born in the small bayou community of Thibodaux, Louisiana,  Ronald Joseph Dominique attended Thibodaux High School where he was a frequent guest vocalist in both choral and glee club performances. When Dominique was in school, he was frequently criticized and picked on by other students. He did not admit to his peers during his teen years that he was homosexual.

On June 12, 1985, Ronald Dominique was arrested and he pleaded guilty to misdemeanor telephone harassment, paid $74 in fines and court costs

On  August 25, 1996, Ronald Dominique was arrested and charged with forcible rape after neighbors found a man who escaped from his home screaming that he had tried to kill him. The case was then brought to court – but when authorities attempted to locate the victim for questioning he could not be found anywhere. The judge decided to continue the case indefinitely in November 1996.

On Feb. 10, 2002, Ronald Dominique was arrested in Terrebonne Parish after he allegedly slapped a woman during a Mardi Gras parade. The reports indicated that Dominique accused a woman of hitting a baby stroller in the parking lot and then verbally assaulted her. He is said to have then struck the woman across the face. He was arrested but entered into an offender program instead of standing trial for his tiny assault on the law. Reports show that he met all his conditions in the program by October 2002.

After that, bodies ranging from ages 19 to 40 would be found over the next nine years mostly in less populated areas. A total of 23 murdered bodies had been retrieved from ditches, sugarcane fields, and desolate bayous. Law enforcement investigated what looked like a serial killer on the loose!

In March 2005, a task force that involved nine different parishes in Louisiana along with the FBI and the U.S. Marshals Service was formed to stop these killings of completely random people out on highways at night. Investigators learned very quickly that many of the victims were high-risk for crime to begin with: most were homeless men, many of them used drugs and were prostitutes.

After receiving an anonymous tip, authorities who were armed with forensic evidence arrested Ronald Dominique and charged him with the murder and rape of Manuel Reed (19) and Oliver Lebanks (27). Days prior to his arrest, he had moved into the Bunkhouse shelter in Houma LA where residents described him as unusual but no one suspected he was a killer till the police showed up.

Soon after Dominique’s arrest, he confessed to murdering 23 men in the southeast region of Louisiana. He would lure homeless men with promises of sex for money or pay them to have sex with his wife which was a lie since he wasn’t married.  After luring the men back to his home, Dominique would tie them up and repeatedly rape and murder them to avoid being arrested.

Dominique accepted a plea bargain from prosecutors on September 24, 2008, and the court found him guilty of all charges and sentenced him to life imprisonment.