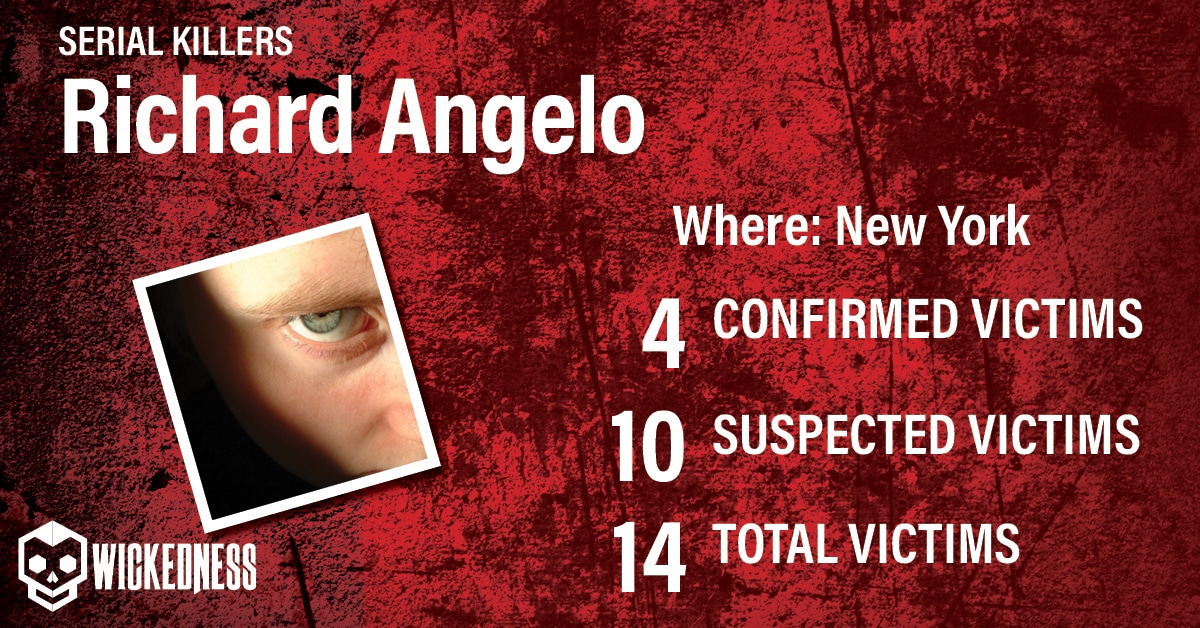 American serial killer Richard Angelo is said to be one of the most prolific killers in America. He was born in Long Island, New York, on August 29, 1962, and he operated within Long Island and West Islip, New York. He was caught in 1989 after killing several of his patients and was sentenced to 61 years to life in prison on a total of eight counts of murder resulting from overdoses of medications he had prescribed.

Richard Angelo was an Eagle Scout. He graduated from John the Baptist Diocesan High School in 1980 and then entered a two-year nursing program at Farmingdale State College. As a well-regarded honor student, Richard Angelo signed up for service as a volunteer fireman at the earliest permissible age in his neighborhood on Long Island, but none of the neighbors had any idea that his actions were driven by an obsessive need for recognition as a “hero” that would drive him to commit vicious crimes later in life.

Richard Angelo (a.k.a. ‘Angel of Death’) worked as a nurse at Good Samaritan Hospital on Long Island, New York from 1973-1987. His torturous methods were to inject patients with toxic chemicals, creating a near-death state from where he could then revive his patient using CPR and other methods in an attempt to impress both co-workers and victims alike with his heroism and medical skills – which ultimately led to the untimely deaths of 25 unconscious victims. During Angelo’s shifts, there were as many as  37 “code blue” emergencies and only 12 of the 37 patients lived.

On October 9, 1987, Richard Angelo drew the suspicion of medical staff after his patient, Gerolamo Kucich, was found to have taken an injection of was found to be of two un-prescribed drugs: Pavulon and Anectine. The patient had called for the assistance of a nurse after getting the injection from Angelo and the nurse took a urine test which proved positive for the presence of Pavulon and Anectine both drugs that had not been prescribed to the patient – at this point police were alerted and evidence against Angelo was obtained when they searched his locker as well as his house where vials containing Pavulon and Anectine were found and he was arrested.

Prosecutors introduced two mental health experts whose diagnosis of Richard Angelo was that he suffered from a personality disorder, but not one that precluded him from appreciating “right” from “wrong.” The two psychologists testified that Angelo suffered from Dissociative Identity Disorder, and after he’d injected his victims, he moved into a separate personality which made him unaware of what he had just done. Angelo had already passed a polygraph test when asked about the murders; however, the results and circumstances regarding this test were ruled inadmissible in court.