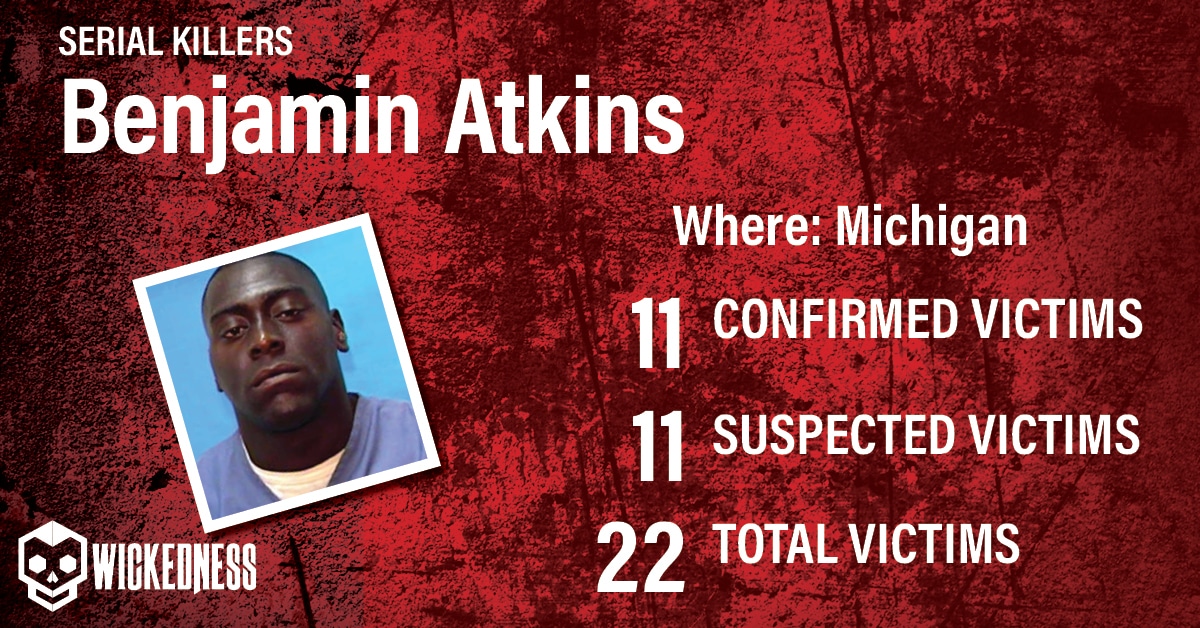 American serial killer and rapist Benjamin Atkins was born on August 26, 1968, in Detroit, Michigan. He earned his notorious reputation as the Woodward Corridor Killer, who murdered 11 women in Detroit for 9 months between December 1991 and August 1992. At one point he confessed that his misogynistic views against girls and women who are engaged in prostitution were the reason for murdering them. He got eleven life sentences but died of an HIV infection on September 17, 1997.

Benjamin Atkins was brought up in a family with a history of drug abuse. He lost touch with his father when he abandoned the family and later got abandoned again by his mother who had turned to prostitution for a living. This resulted in him being put under several foster families and later, put into an orphanage where he suffered physically and mentally from the other children. Later he got raped at 10 years old by his caseworker. By the late 1980s, Benjamin could no longer stand being around his mother’s actions, so he decided to leave home again and lived on the streets, and became addicted to drugs. He developed an antisocial personality and misogynistic behavior.

Benjamin Atkins lured his victims, mostly prostitutes or drug addicts, and took them to abandoned buildings or vacant houses to sexually assault and sodomize them. He would strangle each victim before leaving their lifeless bodies at the crime scenes, where some of the victims were discovered a couple of months after he had stashed their corpses.

The body of the 39-year-old was found on January 25, 1992, sodomized, raped, and strangled, just like the other victims.

34-year-old Valerie Chalk was found dead in her Highland Park motel unit on February 17, 1992. Chalk had been repeatedly sodomized, raped, and strangled to death.

23-year-old Juanita Hardy died in a similar fate as Valerie at the Monterey Motel.

28-year-old Brenda Mitchell. The cause of death was reported to be a drug overdose, however, Mitchell’s body was found raped and strangled on April 9, 1992.

The body of the 45-year-old was found in Highland Park on June 15, 1992. She was repeatedly raped and strangled to death.

Joanne’s body was also found in Highland Park. The 45-year-old was found on June 15, 1992, repeatedly raped, and strangled.

On August 21, 1992, Benjamin Atkins was arrested in Detroit, Michigan on charges of rape and murder. He was identified on a Detroit street by 34-year-old Darlene Saunders who had been sodomized and raped by him in October 1991. Following interrogation, Atkins admitted to killing 11 women, describing in detail the appearance and clothing of the victims, and even indicating the whereabouts of two additional bodies that were later found. The two included Ocinena Waymer who disappeared at age 21 as well as LaTanya Showanda Smith who disappeared at age 29.

Benjamin confessed that his misogynistic views against girls and women who are engaged in prostitution were the reason for murdering them.

The proceedings of trial against Benjamin Atkins began on January 31st, 1994. Testimonies from his victims’ loved ones played heavily in court. The trial took four months and after three days of deliberations, a jury found Atkins guilty and he was subsequently sentenced to multiple life imprisonment terms in April of that year.

Benjamin Atkins was transferred to the Charles Egeler Reception and Guidance Center in Jackson after his conviction. Health issues forced him to be transferred to Duane Waters Hospital, where he died on September 17th, 1997 from an AIDS-related illness.