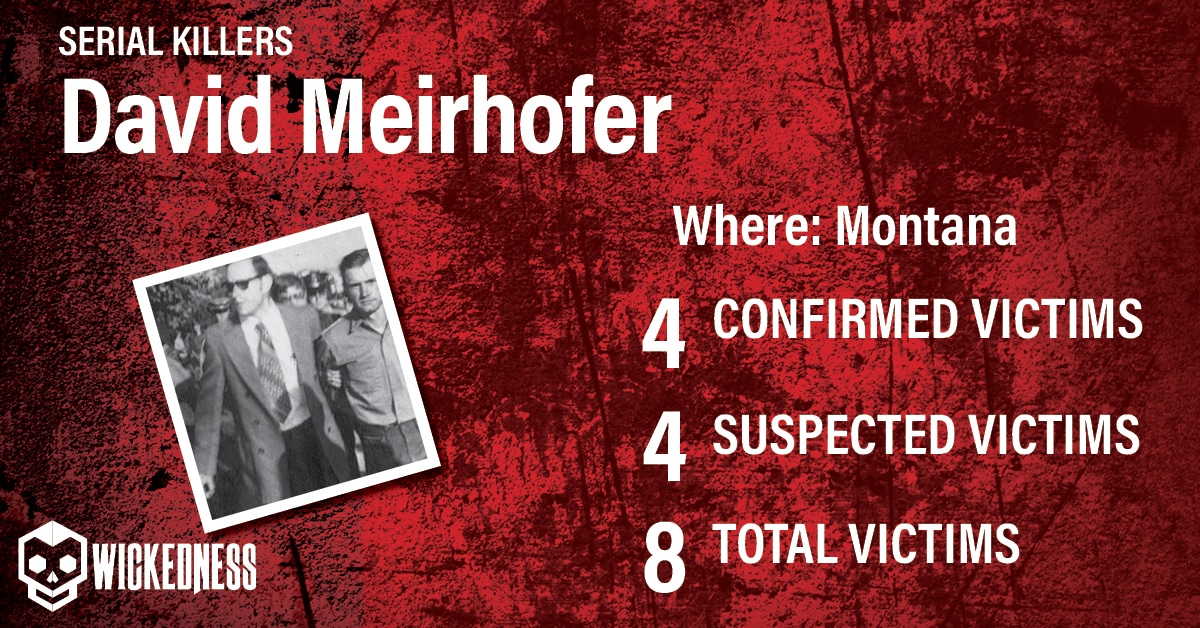 American serial killer David Gail Meirhofer was born on June 8, 1949, in Bozeman, Montana. He was responsible for the murders of four people in Montana, three of them children. The murders were committed between 1967 and 1974. He was also the first serial killer to be caught via offender profiling, a method that is used by authorities to learn clues about a murderer through evidence at the crime scene. Meirhofer was executed in 1994.

David Meirhofer was one of the 5 children of Clifford and Eleanor Meirhofer. He attended Manhattan High School where he dealt with frequent bullying because of his melancholic temperament and introverted nature. After graduating in 1967, Meirhofer worked numerous jobs before enlisting in the Marine Corps on October 1, 1968. During his time in the Marine Corps, he demonstrated many admirable qualities including deploying communication systems, controlling military formations during armed assaults, ultimately leading him to being awarded the National Defense Service Medal, the Vietnam Service Medal, and the Vietnam Campaign Medal for these achievements just to name a few.

Meirhofer retired from the army in 1973 and became a self-employed handyman back in Manhattan.

David Meirhofer’s victim was 7-year-old Susan Jaeger. He had snuck into her tent one night during a family camping trip and taken her without leaving any evidence or request for ransom. However, approximately a year after the kidnapping, something known as offender profiling was used in this case by investigators. The technique led them to believe that the killer was likely a young white male who killed for sexual gratification and may have kept the body parts of his victims as souvenirs. It has been said that this criminal also may have been arrested for other crimes before being apprehended in 1978.

On June 27, 1973, a man called the FBI’s regional offices in Colorado and claimed that he had kidnapped Susan Jaeger. He demanded $25K in ransom. Later, on July 2, law enforcement officers received yet another call: this time, the kidnapper demanded $50K and while they were on the line, he went ahead to describe Susan’s appearance and even pointed out her unique fingernail on one index finger, which was later confirmed by her relatives. Police tried to go through with transferring the money in the hopes of catching him red-handed but it was unsuccessful because nobody came to pick up the money!

On 24th September 1973, the serial kidnapper called and talked to Susan’s older brother. As proof that it was him, he referred to his previous calls to Sheriff as well as the FBI. The family’s house had been wiretapped to record the conversation, resulting in a successful recording of the full conversation. On 25th June 1973, the kidnapper talked with the kid’s mother while describing Susan’s appearance and he ended the conversation by saying that he was unable to return the kid.

On September 24th, 1974 the kidnapper called the family once again presenting himself as “Travis”. Enraged by the family’s cooperation with the police, he declared that the family would never see their daughter alive again. During the phone call, Marietta referred to Meirhofer by name and he did not respond. Unbeknownst to Meirhofer, the FBI had been monitoring this particular phone call and upon further scientific evaluation determined that it was indeed Meirhofer whom Marietta had been referring to thus identifying him as a suspect in the kidnapping. He was arrested the next day.

As David Meirhofer was being detained at the Gallatin County Jail in Bozeman, authorities began a search of his house and the interior of his car, finding bloodied women’s clothing, washed-out bloodstains, a human hand, and several fingers. Though Meirhofer had not killed anyone for about six years, he was charged with the murder of Suzie Jaeger – two boys and a woman whom he kept in varying states of torture throughout an expansive amount of time before ultimately killing them. In September 1974, Meirhofer confessed to having kidnapped Sandra Dykman Smallegan from her sleep during February of that same year, who once dated Meirhofer.

During questioning, Meirhofer confessed to having killed Suzie Jaeger, two boys, and Sandra Dykman Smallegan. Smallegan had once dated Meirhofer, but they had broken up over three years prior.

David Meirhofer committed suicide on September 29, 1974, by hanging himself in jail. This happened just four hours after confessing to the murders. The murder cases associated with him were closed, but the authorities never got him to state his reasoning and motivations for the murders.