Sigmund Freud was a very famous psychoanalyst who believed that the human personality and behavior are derived from the unique and constant interaction of some conflicting psychological forces. He said that these psychological forces work on the basis of three different awareness levels.

These awareness levels include unconscious, conscious, and preconscious. According to Freud’s theory, each of these levels plays a vital role in defining personality and influencing behaviors.

Who Was Sigmund Freud? 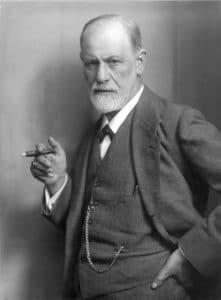 Sigmund Freud is one of the most popular neurologists of the twentieth century, He founded the psychoanalytic theory and his personality development perspective varies from the general theory of social learning. He looked for unconscious processes and unconscious motives in his patients’ minds to understand how their behavior is influenced.

At that time Freud’s ideas were considered shocking and interestingly, people still debate to understand whether his ideas are true or not. However, it’s a fact that his work has a profound influence on many different fields including art, literature, anthropology, sociology, and psychology.

In order to refer to and define many aspects of his work, the psychoanalysis term is used. The same term also refers to the research techniques that the psychoanalyst used to develop his theories about personality development.

What is Sigmund Freud’s Iceberg Theory?

It’s important to note that the theory also says that about 90 percent of the iceberg is below water which means that the majority of the human brain consists of a subconscious part. The model of the iceberg is still used in psychology to describe the theoretical concepts of three levels of consciousness of the Freudian theory.

What are the Three Levels of Consciousness According to Freud? 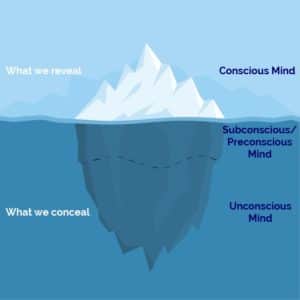 It’s important to note that Freud’s structural theory about human personality is still subject to criticism.

According to Freud’s theory, the conscious level of the human mind basically controls all the wishes, emotions, feelings, memories, and thoughts, which a human is aware of at a certain moment.

This level allows humans to think and speak words logically and rationally. Interestingly, the conscious level also includes the thoughts that aren’t always present in our consciousness but can be brought into awareness whenever needed.

The preconscious level of the theory includes all the feelings, words, emotions, wishes, and thoughts that a person can bring to his/her conscious mind.

All the things that are outside the conscious awareness of a human mind are known to be the unconscious mind. It included everything from memories and urges to thoughts and feelings. It also contains things that are unpleasant and unacceptable like feelings of conflict, anxiety, and pain.

Probably the most interesting thing is that the unconscious mind governs the behavior of the human personality to a deeper and greater degree than almost all people suspect. Additionally, people also use a vast array of defense mechanisms including repression and aggression in order to avoid their unconscious feelings and motives..

What is the Freudian Slip? 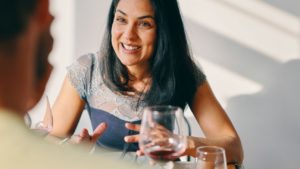 Understanding the slip of the tongue is one way to understand conscious, preconscious, and unconscious minds. Most people experience Freudian Slip once in a while. Freud believed that the slip of the tongue reveals the unconscious thoughts or feelings of a person in a form of an unintentional error. A good example of a slip of a tongue is when a person calls their spouse by the ex-spouse’s name. 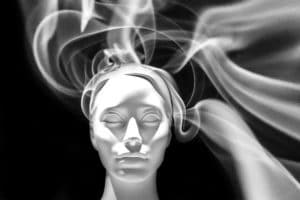 According to Freud’s theory, emotions, feelings, thoughts, and wishes that are outside of the person’s awareness influence his personality and behavior all the time. However, people usually don’t realize that they are under the influence of their unconscious mind.

The unconscious mind can operate this way in the form of reactions, desires, thoughts, habits, hidden memories, and repressed feelings. All the emotions and memories that are too distressing, shameful, embarrassing, or painful to face consciously, are stored in the major part of the human mind that comprises the unconscious mind.

Freud used different techniques such as free association and dream analysis in order to identify the primary causes of psychological distress.

What Does Iceberg Mean?

The iceberg analogy is a useful metaphor and a topographical model to understand three different levels of human minds that Freud explained. The tip of the iceberg, floating in the sea, that we can easily see is considered to be the conscious mind.

Freud explains that human behavior is primarily derived from the unconscious level of the iceberg. It means that the most important part of the human mind is that it’s invisible to us. Our decisions, motives, and feelings all are influenced by the unconscious mind.

What’s the Role of the Unconscious Mind?

The subconscious or unconscious mind is basically the main reservoir that stores all the data and it’s not in the person’s conscious mind or control. It stores everything from skills and memories to past experiences and beliefs. It’s like a guardian system for human beings as it defines personality and behavior.

While many of Freud’s concepts have gone out of favor, the role of the iceberg analogy, especially the subconscious mind, has become one of the most significant contributions to the field of psychology.

Psychoanalytic therapy, which investigates how the unconscious mind shapes actions and beliefs, has emerged as an essential therapeutic option for mental disease and psychological suffering.