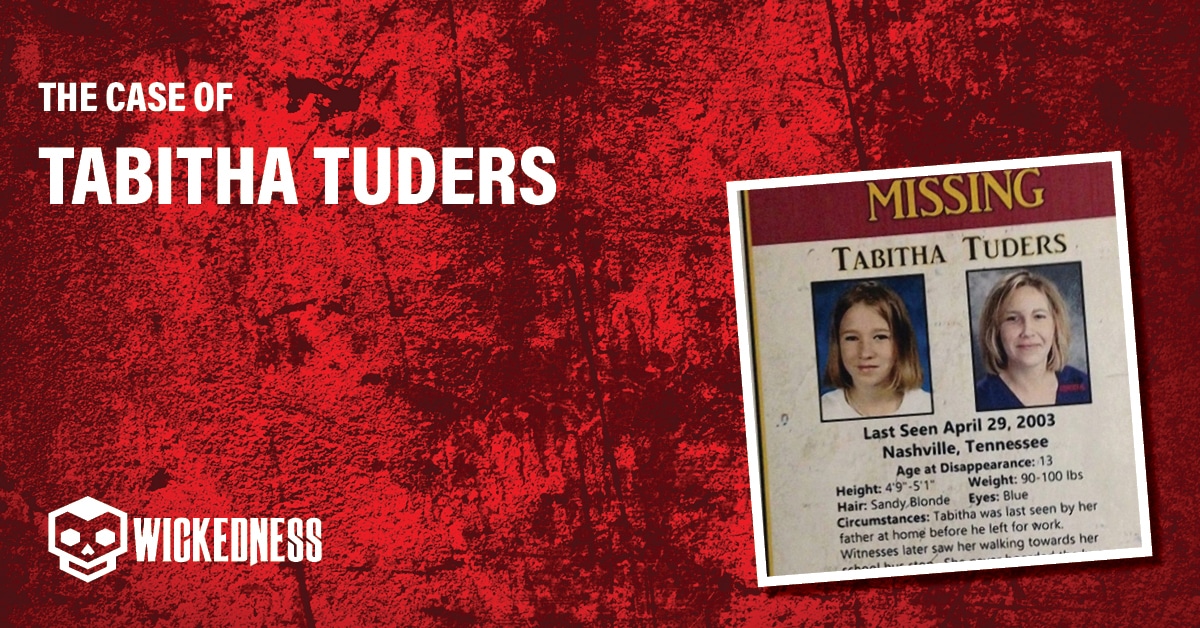 Who Was Tabitha Tuders?

Tabitha Danielle Tuders was born on February 15, 1990. She lived in East Nashville, Tennessee, with her parents, Debra and Bo Tuders. Tabitha also has two older siblings, Kevin Tuders, who was 25 at the time of her disappearance, and Jamie Tuders, who was 21. She loved to sing and sang in her church choir. Tabitha had sandy blonde hair and blue eyes. She was described by her family as an ever-smiling, lively girl.

On April 29, 2003, Debra awoke at around 5 am for work. She worked in the cafeteria in the local school district. When Debra Tuders left for work, Tabitha was still asleep.

At 7 am, Bo woke Tabitha up for school and left shortly after for work. Tabitha left her home at 7.50 am to walk 5 minutes to her bus stop from where she would ride the bus to Bailey Middle school. There were two possible bus stops Tabitha could have taken to get to school. Her mother had told her if there were no kids at the first one to walk to the second one, which was only a block away from the first one.

Debra arrived home from work at 1 pm and expected Tabitha to be home from school later that afternoon at around 4 pm. However, Tabitha never came home from school. Concerned about her daughter Debra started looking for her. She walked to the bus stop, but when no one there had seen Tabitha, she drove to the school, where she learned Tabitha hadn’t made it on the bus and hadn’t been to school that day.

At 6 pm that night, with still no sign of Tabitha, the Tuders family called the police.

The police arrived at the Tuders family home and took a missing person report from Debra and Bo, Tabitha’s parents. Police were not concerned at this point and didn’t issue an amber alert. They believed the most likely scenario was that Tabitha had runaway. But Tabitha’s parents knew instantly that this was not the case. Tabitha wasn’t a rebellious kid. She was scared of getting into trouble.

The police took a statement about what Tabitha was wearing that day, a blue shirt, jeans, and white sneakers. They also briefly searched the home and collected her hair brush and toothbrush to obtain some DNA.

Two days later, there was still no sign of Tabitha. So the police returned to her home to conduct a more in-depth search. During this search, they discovered a note. The note had Tabitha’s initials, TDT, as well as the initials MTL. These initials were later found to belong to an 18-year-old son of family friends. The 18-year-old boy was questioned and eventually ruled out.

A few days later, police received an eyewitness tip from an 11-year-old classmate of Tabitha’s. The 11-year-old boy said he saw Tabitha walking to the bus stop and that she was approached by a red car during the walk. He said Tabitha got into the car and that the vehicle being driven by a black male drove off.

Investigators searched the area where Tabitha would have walked with tracker dogs. The dogs lost her scent between the two bus stops at 14th & Boscobel streets. Meaning Tabitha never made it to the second bus stop.

Upon questioning the man, they learned that he and Jamie had broken up before Tabitha disappeared and that he hadn’t been at the Tuders’ home in a while. The man didn’t own a car and took a polygraph test. He passed the polygraph test and was ruled out as a potential suspect.

A mother of two girls came forward to tell the police to look into a man named Paul Davis. In 1997 when one of her daughters was 10, Paul had taken an interest in her. Paul Davis had a previous criminal history. He had been arrested for statutory rape in an unrelated case to which he was sentenced to five years of probation.

Police questioned Paul Davis, but he was ruled out after his alibi checked out. He was in Kentucky at his sister’s home when Tabitha went missing.

To date, Tabitha Tuders is still missing. It has been 19 years, and her family still believes they will one day have answers about what happened to their 13-year-old girl. They believe she was abducted that day, whether it was by someone she knew or didn’t know. Her case remains active and open. If you know anything about the disappearance, please call Crime Stoppers at 615-74-CRIME.

A.Tabitha Tuders is still missing. Her case remains active and open. If you know anything about the disappearance, please call Crime Stoppers at 615-74-CRIME.

Q. How old would Tabitha Tuders be now?

A. Tabitha Tuders went missing 19 years ago. Today she would be 32 years old.

A. Tabitha Tuders was last seen on the morning of April 29, 2003. She left her residence in Nashville, Tennessee, to board the school bus, but she never got on the bus, and never arrived at school. She has not been seen or heard from since.