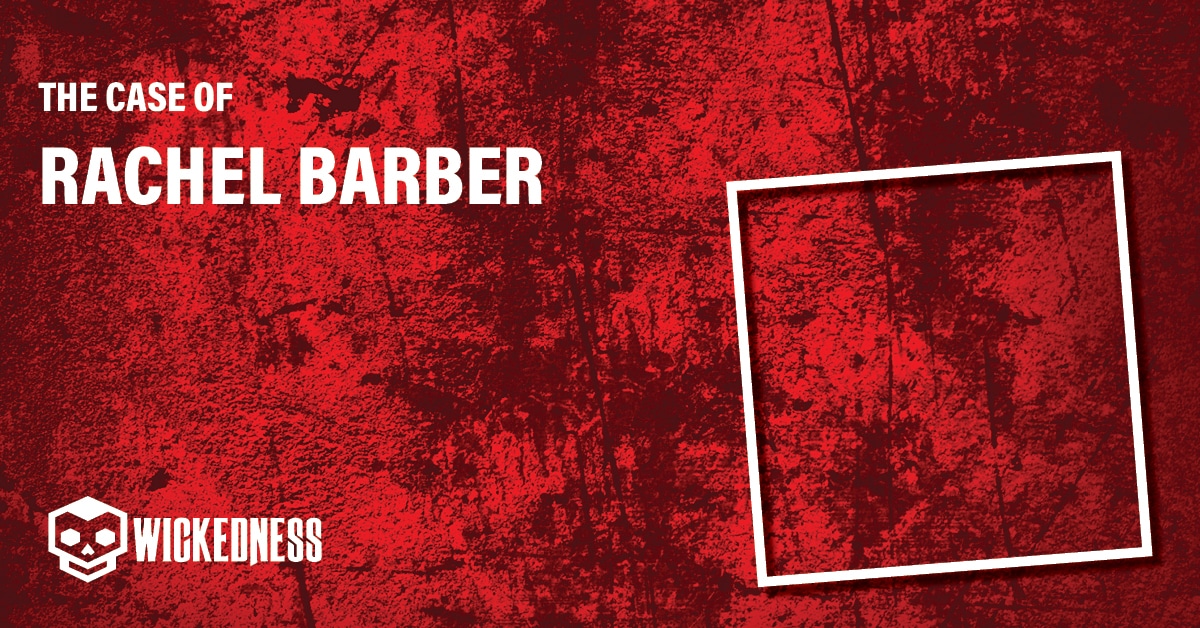 Rachel Barber was born in Melbourne, Australia, on September 12, 1983. From an early age she showed an interest in art, so in addition to having the looks for it, she also wanted to pursue modeling and classical ballet.

Together with her younger sisters, Ashley and Heather Barber, she grew up in a very loving and musical family. Rachel Barber’s parents supported her since she was very young in her dancing interests, even writing her up for a class and were very impressed with her talent.

As she reached her teenage years, Rachel divided her time between school and her passion for dancing. She was a promising student, her peers at school and in dance classes describe her as a very beautiful young girl, with striking emerald eyes and very popular.

Despite her beauty and popularity, Rachel was also very shy and although she was not a bad student, she neglected school a bit in order to continue with her dance classes, which took up a lot of her time.

In 1998, Rachel asked her father, Michael Barber, to allow her to study at the Dance Factory, one of the most important schools in the city. Since her parents saw that Rachel was really focused on what she wanted, they agreed to let her attend the dance school.

It was at that school that she met Manni Carella, who also attended dance classes. The two became sweethearts and their friends called them “Romeo and Juliet” because they made a beautiful couple.

On March 1, 1999, Rachel had to go to school, and like every day, her father took her to the streetcar, on which she would go to meet her friends at another point so that they could all walk to school together.

During the day everything was normal and at the end of the school day, Rachel had to take the streetcar to the station where her father would pick her up. Her boyfriend walked her to the streetcar and said goodbye to her.

That was the last time Rachel Barber was seen alive.

Rachel Barber Did Not Return Home

On March 1, 1999, Rachel went to school as she did every day. Every day she took the same route; her father would drop her off at the station to catch a streetcar to where she would meet her friends, and then they would all walk to school together.

Their route was the same on the way back.

During the day, everything seemed normal; however, Rachel told her friends and her boyfriend Manni that later that day, she had made plans to do a job that would be very easy, fast, and would bring her a lot of money.

Although her friends asked her several times what it was about, she replied that she could not tell them. This somehow raised a red flag for her friends, as generally, making quick and easy money was not exactly a good thing.

However, Rachel told them that there was nothing to worry about since the person who had offered her the job was someone she trusted and who had promised not to tell the secret.

That day, after school, her boyfriend accompanied her to the streetcar station, where she would travel to meet her father and return home. He said goodbye to her, and that was the last time anyone saw her alive.

Rachel’s mother was concerned that she was not returning, so she contacted Michael, her father, who told her that she never made it to the station where they were to meet.

When Rachel didn’t show up, they immediately called the police to report her missing.

That job offer Rachel had received turned out to be a trap. Eleven days later, they found Rachel’s lifeless body.

Upon realizing that Rachel did not return home, her parents called the police to report their daughter missing. At first, the police ignored the situation since she was a 15-Year-Old girl and had probably run away with her friends.

The very worried family decided to start the search on their own with the help of some relatives and friends. However, they did not find any clues.

Thanks to the insistence of Rachel’s family, the police decided to start the investigation three days after the disappearance. They began questioning Rachel’s closest family members and friends.

The first to be interviewed was Rachel Barber’s boyfriend. After being subjected to several questions, he was ruled out as a suspect, as all his alibis were checked out.

A friend of Rachel’s approached the family and told them that she had seen her the same day she disappeared. She told the police that she saw Rachel with another girl on the streetcar and that they seemed to be good friends, as the whole time they were chatting until they got off at the High Street and William Road station.

The police took it upon themselves to give her the physical descriptions of the girl who accompanied her to see if there was anyone close to the family who might have the same characteristics. This is how the name Caroline Reed Robertson, who years earlier had been a close friend of the family, and had even been the nanny of Rachel and her two younger sisters, came up.

Caroline was a neighbor of the family for many years, and although she was very close to them, after they moved away, they lost contact with her. Coincidentally, a few days after Rachel’s disappearance, Caroline had called the Barber’s home to ask how the case was going.

The next step in the investigation was to check the phone records of the house. The police reviewed the calls made days before Rachel’s disappearance and found an unknown phone number.

Someone called from that number twice, for almost an hour each time. No one in the family had ever received a call from that number, let alone for a long time, so they assumed it must have been Rachel who answered those calls.

Upon checking with family members, they realized that this number they did not know was the same number from which Caroline Reed Robertson had called days after the disappearance to ask how the case was going.

On March 12, 1999, eleven days after Rachel’s disappearance, the police went to Caroline’s residence. It was an apartment she had recently purchased and happened to be near the place where Rachel was seen getting off the streetcar with a girl.

Since no one responded, they decided to break in. Once inside, the police found Caroline in her bedroom lying face down on the floor; although she appeared to be dead, they realized she still had a pulse, so they took her to the hospital.

While she was being transported to the nearest hospital, part of the investigation team stayed in the apartment, checking the place. Everything seemed very normal until they found several notebooks.

These notebooks had a lot of information about Rachel with some disturbing details. Caroline had written that she was scheduled for plastic surgery and was planning to change her name to Rachel Barber.

Caroline wrote in the notebooks about how perfect Rachel was. She also wrote many derogatory phrases to refer to herself, such as ugly, and fat, among others.

She also wrote that she would have plastic surgery to look as much like Rachel as possible. On other pages of the notebooks, Caroline also described various ways she could kill Rachel.

After Caroline seemed to have recovered, the investigative team questioned her, asking her about Rachel Barber’s whereabouts. It was then that Caroline Reed Robertson, very calm, told them that Rachel was dead and where the body was.

Police found Rachel’s lifeless body on the outskirts of Melbourne, with a telephone cord tied around her neck.

Following her recovery, Caroline Robertson was arrested for the murder of 15-Year-Old Rachel Barber.

The Day Rachel Barber Was Murdered

The day before the disappearance, Caroline called Rachel at home to offer her a job where she could make a lot of money quickly and easily. According to her proposal, it was a psychology study.

Caroline told her that it was basically answering a psychological survey. She would only have to answer certain basic questions, but it was a confidential study, and for the job to really be valid, she could not talk about it with anyone or tell her friends what it was about.

Rachel trusted Caroline; after all, she was a family friend of many years. So they met at a place and went to Caroline’s apartment, where she was supposed to do the survey.

Before starting with the survey and the questions, they ordered pizza; however, Caroline put some drowsy powder on Rachel’s pizza, and when it started to take effect, she strangled her with a phone cord.

After keeping Rachel’s body in her apartment for two days, on March 4, 1999, she hired someone to help her move a “statue” to her father’s farm. However, it was actually Rachel’s lifeless body, hidden in bags and a clean carpet.

Once she had brought the body to her father’s farm, Caroline buried it.

Caroline Robertson and Her Obsession

Caroline Robertson had been Rachel’s neighbor for five years. Some years ago, she had been a neighbor of the family and, for a time, was also the babysitter for Rachel and her two sisters.

Robertson had gained the trust of Rachel’s parents and always seemed to be a polite and well-mannered girl.

With the murder investigation, Caroline was described as a lost soul with many self-esteem issues and a very contemptuous view of herself.

The diaries found by the police revealed that Caroline had become obsessed with Rachel because she was perfect, young, and talented. She wrote compulsively in her notebooks about Rachel, constantly describing her and giving many details about her eyes, body, and hair.

On the one hand, she wrote negative characteristics about herself, and on the other, she wrote obsessively about Rachel’s qualities.

For many people, it was a crime of hate and envy; others assumed that they might have had a lesbian relationship. However, there was never any proof of that since for years, they had no contact.

The prosecution argued Caroline’s obsession with Rachel as a motive to murder her. In addition, diaries found in Caroline’s apartment describing various ways to kill her were sufficient evidence.

In October 2000, Caroline Robertson was convicted of the first-degree murder of Rachel Elizabeth Barber.

In November 2000, she was sentenced to 20 years in prison, with an option for parole after serving 15 years.

Caroline Robertson served 15 years in Deer Park’s prison under psychological treatment. She was paroled in January 2015.

Why did Caroline kill Rachel?

The prosecution argued that Caroline Robertson killed Rachel Barber because she was obsessed with, envied and hated her.

What is the name of the film inspired by the Rachel Barber case?

The movie inspired by Rachel Barber’s murder is called “In her skin.” It was released in 2009.

Where is Caroline Robertson now?

Caroline Robertson received parole in 2015. There is no information on where she is and what she is currently doing.