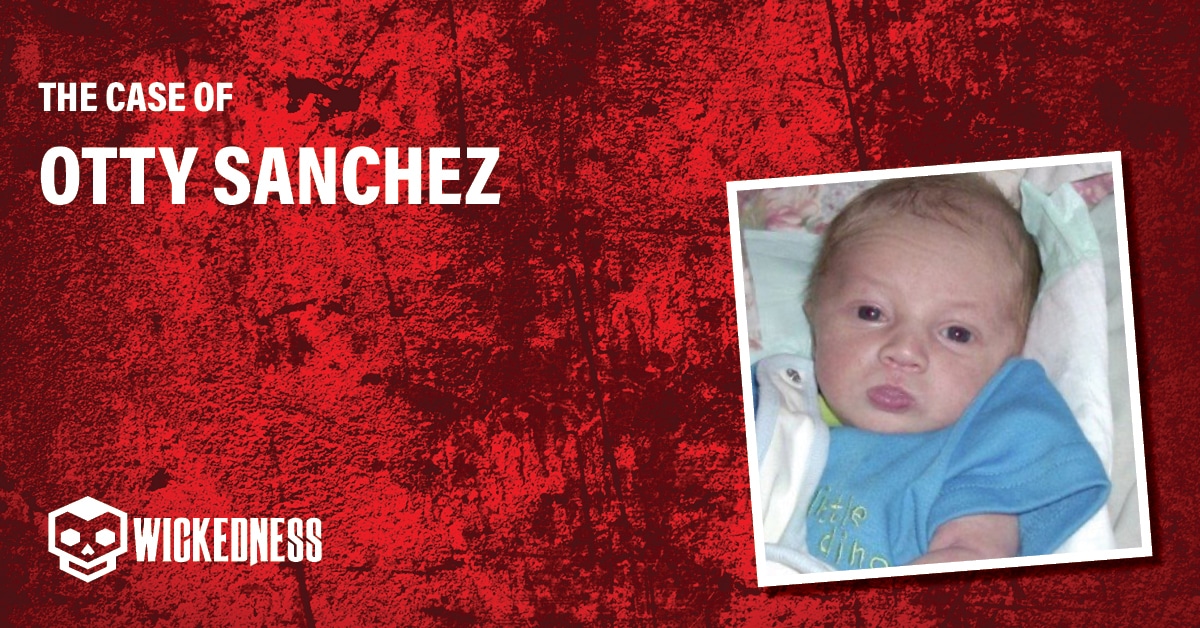 Who Was Scott W. Buchholz-Sanchez?

Scott Wesley Buchholz-Sanchez was born on June 30 2009 to his parents, Scott Buchholz and Otty Sanchez. As he was only 26 days old when he passed, there’s not much known about his personality but he was a beautiful baby boy who paid the ultimate price. He was the victim of a heinous crime that could have been prevented.

On July 26 2009, San Antonio police department recieved a phone call from Otty Sanchez’s sister, Priscilla Garcia. She claimed that Otty had murdered her newborn son. When officers arrived on scene, they were met with a scene that can only be described as a bloodbath.

Scott Sanchez-Buchholtz had been stabbed to death and his body mutilated. It’s also said that part of his brain had been consumed by Otty herself.

In the early hours of July 26 2009, a 33-year old woman called Otty Sanchez stabbed her newborn son to death. She used a steak knife and two samurai swords as weapons to kill, mutilate and partly dismember the baby. It’s also been reported that part of his brain had been eaten by Otty. She carried this horrendous attack out while her sister and two nieces were in the house, sleeping.

Just before 5am, Otty’s sister discovered what had happened in the house and called 911. Police officers from the San Antonio Police Department arrived on scene not long after the 911 call was made. Otty claimed that she’d heard voices and seen hallucinations of the devil and he was the one who told her to kill her baby.

After confessing to the crime, Otty stabbed herself in the stomach and slit her throat in a suicide attempt. She was rushed to hospital where she survived her self-inflicted stab wounds and was later arrested for the brutal murder of Scott.

Otty Sanchez was born in 1976 but her exact DOB isn’t known. There’s little information available about Otty online so not much is known about her childhood or her life before she gave birth to Scott. She was a former home health care worker at the time of the murder which shows that she was a sweet person and did have a caring nature, despite the crime she committed.

Otty didn’t seem to have a history of crime but there was a history of hospitalizations and of serious mental defects.In later interviews, Otty said she started taking drugs in 2006 and this is when the hallucinations started and her mental health concerns began.

In 2008, Otty’s mother called the police after her daughter didn’t return home when she said she would. She thought that maybe Otty was taking drugs again but in reality, Otty had been in Austin to see an acupuncturist which she hoped would help with her hallucinations. At this time, Otty had mental health concerns and she’d been in and out of a psychiatric ward but nothing was really being done to help her mental health.

When Otty’s mom, Gloria Sanchez, called the police, Otty was found in a pharmacy and she had been there for several hours because, she claimed, voices told her to. Otty was taken to Austin State Hospital where she was diagnosed with schizophrenia.

On July 20 2009, Otty went to hospital and told staff that she was having intrusive thoughts and hearing voices. The hospital staff determined that she was suffering a severe mental breakdown, likely caused by postpartum blues, and they sent her to the ER. Staff there released her on the same day with no follow up action. This was just six days before the murder and any warning signs had been ignored.

Otty told her boyfriend, Scott Sr. that she needed to move back in with her sister. Up until this point, the couple had been living together but Otty realised that she needed to be with people who understood her mental state. Scott Sr. later said that he knew she was suffering with postpartum depression but he didn’t think she was a danger.

A few days before the murder, Otty took Scott Jr. to his father’s house so they could spend some timd together. An argument erupted, the cause of which isn’t known exactly, and Otty stormed off with the baby. The police were called because of Otty’s unstable behaviour but the police wrote it off as a disturbance. They said that if Scott Sr. had informed them of Otty’s post-natal depression and post-natal psychosis, they would have treated it differently.

There was no doubt that Otty Sanchez was the one who committed this murder. When police arrived at the scene, she was covered in her son’s blood and it didn’t take long for Otty to confess. She told law enforcement that she hadn’t meant to kill her baby but the devil made her do it.

Even though Scott Sr. wanted Otty to face the death penalty for killing Scott Jr., her defense lawyer wanted Otty to undergo psychiatric evaluation and plead not guilty by reason of insanity.

In interviews with psychiatrists, Otty claimed that the devil had told her that Scott Jr. was the apocalypse. The voices had told Otty that there was a demon in her stomach, she was a harlot because she had committed adultery. In order for the demon in her stomach to disappear and baby Scott to be saved, she had to eat his insides and he would evolve. She claimed that eating her son’s flesh made her gag and throw up but she carried on to save him and herself.

There was no trial because of Otty’s mental state.

On June 30 2010, Otty Sanchez was found not guilty by reason of insanity. It was determined that at the time of the murder, she couldn’t tell the difference between reality and impressions of reality caused by hallucinations. She was also diagnosed with postpartum psychosis, a rare mental illness that affects adult women who have recently given birth.

What did Otty Sanchez do?

Otty Sanchez was a 33-year-old mother who stabbed her newborn, Scott Jr., to death and then mutilated his body. She claimed the devil told her to do it, she suffered with severe postpartum psychosis.

Where is Otty Sanchez now?

Her exact whereabouts aren’t well-known but when she was sentenced, she was sent to a state mental institution in Vernon, Texas. Her sentence meant that she is to be held there indefinitely and a judge has to perform a yearly review on her case. Otty Sanchez will remain there until she is no longer a threat to herself and others.