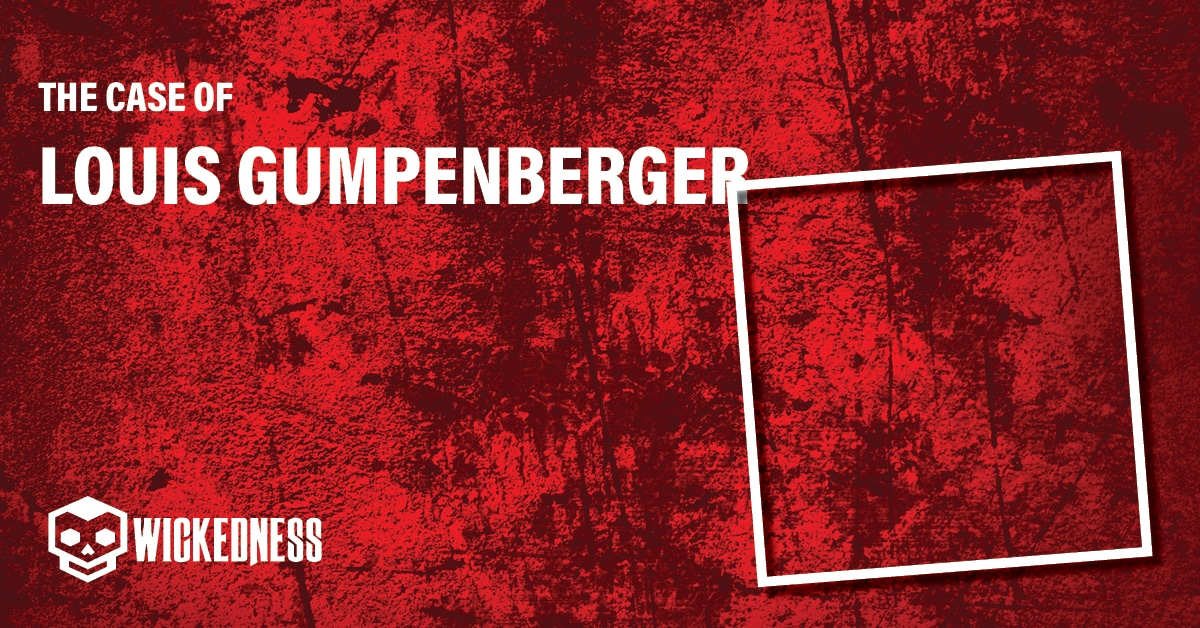 Who Was Louis Gumpenberger?

In 2016, Louis Royse Gumpenberger was a 33-year-old man living with his mother, Margaret Burch, in St Charles, Missouri.

Eleven years prior, in 2005, Louis Gumpenberger had been in a severe car accident that had crushed his skull and later left him with significant developmental delays. He was described as child-like and was unable to process complex sentences. He also walked with an obvious limp and his left hand was completely useless. Due to his accident, Louis was unable to drive and rarely left the house that he shared with his mother unless it was for short walks.

At the time of his death, Louis Gumpenberger had two children from separate marriages: Desi and Trevelyan.

On August 16, 2016, a woman named Pamela Hupp called the police to say that she had shot a man who had broken into her house and threatened to kill her. It was 33-year-old Louis Gumpenberger. Pam Hupp claimed that Louis had demanded “Russ’s money” and threatened to assault her. That’s when she retrieved her gun and emptied the revolver into him. When police arrived at Pam Hupp’s home, they found that Gumpenberger had $900 and a note with instructions that directed Grumpenberger to “kidnap Hupp, get Russ’s money from Hupp at her bank, and kidnap and the to, “Take Hupp back to the house and get rid of her. Make it look like Russ’ wife. Make sure the knife sticking out of the neck.”

Immediately after the shooting, Hupp voluntarily went to the O’Fallon Police Department. Her first words in the recorded interview were, “Is this going to be filmed? Because I always appear on the news with [KTVI reporter] Chris Hayes.”

Elizabeth “Betsy” Meyer Faria worked with, Pam Hupp at State Farm and lived with her husband, Russell “Russ” Scott Faria. The two women became close and were considered good friends. Betsy was diagnosed with terminal cancer in 2010 and given only a few short years to live.

In 2011, Pam Hupp and Betsy organized a collection for another family that had been affected by cancer. It would later be revealed that the family never knew of this fundraiser and never received profits from it. There was never any indication that Betsy knew it was a scam and had told friends and families that she was excited about it. One of her friends, Kathleen Meyer, said, “This was going to be a legacy for her, to leave something like this behind in her memory.” Though this was brought to Lincoln County authorities’ attention, it was not investigated any further.

On December 22, 2011, Betsy Faria changed the name of the benefactor of her life insurance policy from Russell Faria to Pam Hupp, which was $150,000. None of her family knew anything about this sudden change. Pam would claim that Betsy Faria had asked her to give the money to her children when they grew up but later claimed that Betsy asked her to keep it for herself.

Five days later, on December 27, 2011, Betsy Faria underwent a session of chemotherapy and then visited her mother. Originally, Russell Faria was going to pick Betsy up, but Pam Hupp showed up unexpectedly and insisted on driving her home. This was the last time that anyone saw Betsy alive.

Russ Faria, who had spent the evening at his friend Michael Corbin’s house, returned home at and called the police at 9:40 p.m. He described how had come home to find his wife on the floor with a knife in her neck, and in his shock, said that he believed that she might have committed the suicide that she had been threatening to do due to her terminal cancer. When police searched the property, they found a pair of bloodstained slippers in his closet.

Russ was arrested by Lincoln County police and charged with the murder of his wife, Betsy Faria. Though the evidence would show that he was not in the area at the time the murder was committed, the prosecuting attorney Leah Askey successfully argued that his alibi was false.

The defense was not permitted to question or suggest the involvement of Pamela Hupp despite evidence that implicated Hupp. This includes the life insurance that was changed to Pam Hupp’s name days before the murder and the records indicating that Pam Hupp’s phone was in the area at the time of Betsy Faria’s murder. Pam Hupp’s testimony was accepted into the case and used against Russ Faria.

On November 21, 2013, Russ Faria was found guilty and sentenced to life in prison, plus 30 years, with no possibility of parole.

After judge Mennemeyer recused herself from the case, 22nd Circuit Court Judge Steven Ohmer granted a motion for a new bench trial based on the evidence that had emerged. Russ Faria was released on bond pending the new trial.

On November 7, Russ Faria’s conviction was overturned, and he was released from prison after having served almost four years.

In January 2018, during a civil rights lawsuit against Lincoln County for the mishandling of his case, Russ Faria’s attorneys deposed Hupp. However, she declined to answer any questions relating to the murder of Betsy Faria. In March 2020, Russ received a settlement in his case worth over $2 million.

This, along with Russ Faria’s suing Pam Hupp over Betsy Faria’s insurance policy, is what police believe angered Pam Hupp enough to begin her search for someone like Louis Gumpenberger. Pamela was also worried because, with Russ Faria being found innocent of the murder of his wife, she was the obvious suspect.

Pam Hupp: Why Did She Kill Louis Gumpenberger?

When 60-year-old Pam Hupp found Louis Gumpenberger, she knew she’d found her scapegoat. She devised a plan that would frame Russ Faria for another of her murders. Police believe that Pam Hupp lured Gumpenberger to her home by pretending to work as a Dateline employee and offering him money to play a small part. Louis Gumpenberger’s mother, Margaret Birch, would later say that he went to pay off the family debt.

Pam Hupp lured him into the house, shot him five times with a revolver, and planted the note that implicated Russ (which would draw back to the murder of Betsy due to the style of death suggested in the note, “knife sticking out of the neck.”

The evidence against Pamela Hupp was overwhelming.

Pamela Hupp entered an Alford plea in the wrongful death lawsuit involving the murder of Louis Gumpenberger. An Alford plea is a “guilty plea in which a defendant maintains their innocence but admits that the prosecution has sufficient evidence to persuade a judge or jury to find the defendant guilty, and thus agrees to be treated as guilty.”

Pamela Hupp was given a life sentence for the murder of Louis Gumpenberger, a sentence agreed upon by all to take the death penalty off the table.

Pam Is Charged with Betsy Faria’s Murder in 2021

Betsy Faria’s case was reopened, and on July 12, 2021, Pamela Hupp was charged with Faria’s first-degree murder. According to court documents, it has been asserted that Hupp murdered Betsy for financial gain. Hupp has pleaded not guilty.

In a press conference, Lincoln County Prosecutor Mike Wood stated that he intends to seek the death penalty against Pam Hupp. He states, “This case stands alone in its hideousness and depravity, and I believe that no one could look upon this case without being shocked into recognition of its utter horror.”

Krystal Conn, Gumpenberger’s sister, in attendance at the proceedings, called Hupp a “monster,” the Post-Dispatch reported.

Despite the outcome, Pamela Hupp will spend the rest of her life in prison for Louis Gumpenberger’s murder.

Shirley Neumann, Pam Hupp’s mother, died in an apparent accident at her assisted living home after last being seen by Pamela Hupp, who had told staff not to expect Shirley for the rest of the night or the following morning.

The following month, the Lincoln County Sheriff’s Office received an anonymous note suggesting that Hupp had murdered her mother for financial gain. After her death, all of Shirley Neumann’s children received approximately $120,000 of investments and $10,000 in insurance payouts.

After being dropped off at her apartment by Pamela Hupp, Shirley Neumann’s body was found the next morning by staff beneath the balcony of her apartment.

In her autopsy, it was discovered that Shirley had .84mcg of the sedative Zolpidemin her blood, which is over eight times what the normal dose would have been.

In November 2017, the chief medical examiner for St. Louis County, Mary Case, changed her manner of death from “accidental” to “undetermined.” The Case, however, has not been reopened.

A GoFundMe has been set up for grieving mother, Margaret Burch, by her friend, Chris Damato.

A: Yes, Pamela Hupp is currently serving a life sentence for the murder of Louis Gumpenberger.

Q: Is The Thing About Pam a true story?

A: Yes, The Thing About Pam is based on the real crimes committed by Pamela Hupp.