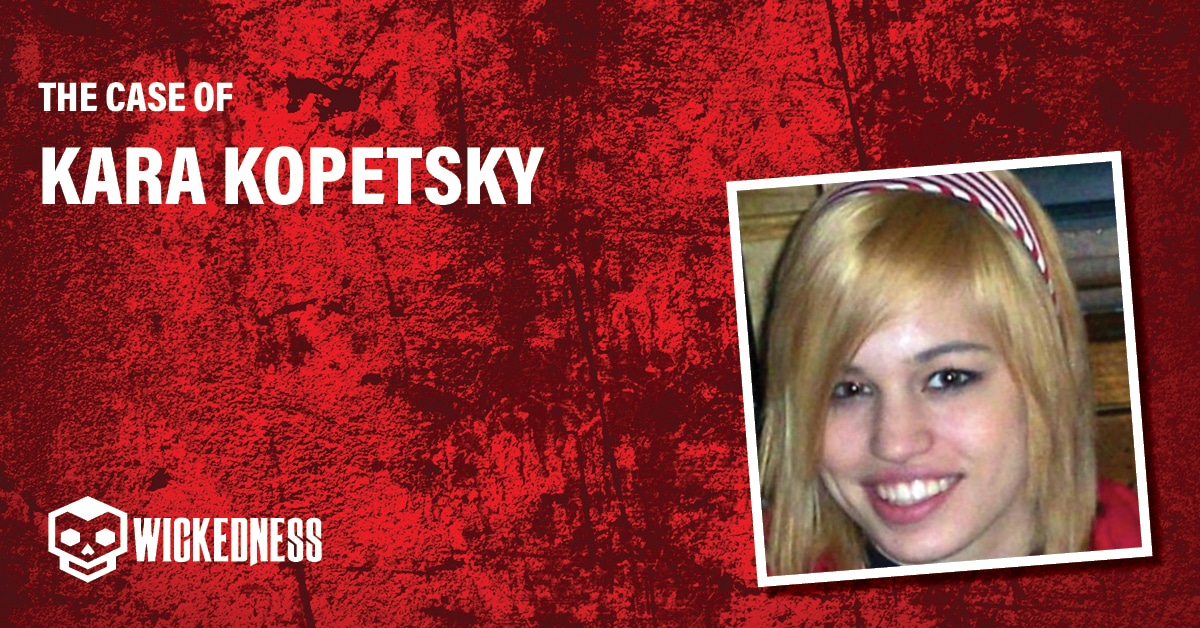 Kara Elise Kopetsky was born on February 17, 1990 to Rhonda Beckford and Michael Kopetsky. Kara was an only child. She was described as being a beautiful girl, very smart and with a lot of personality, sometimes she could be a bit of a rebellious teenager too. She would sometimes skip school. What Kara wouldn’t do is skip a day of work. Kara really liked her job at Popeye’s and was always very responsible about it.

On Friday May 4, 2007 Kara called her mother while being in Belton high school and asked her to wash her Popeye’s uniform so it would be ready for her to go to work later. The 17-year-old high school girl was supposed to go home, pick up the uniform and go to work. But Kara didn’t show up at all at home or at work.

Rhonda Beckford started calling Kara but her phone was going straight to voicemail. After a whole day of Kara being missing, her mother decided to call the police and ask them to look for her but they just told her that since Kara was a teenager used to skip school and be a bit rebellious probably she had taken a day for herself and she would soon come back. Rhonda insisted that she was worried because recently Kara had been having problems with her ex-boyfriend Kyrl Just. Kara had recently received threats and abuse from him. Kylr had previously kidnapped Kara, threaten to slice her throat and other horrible things. On the restraining order, Kara stated she needed protection because the abuse had become worse overtime. This order had been filed just a few days before Kara disappeared.

On May 5, the police called Kylr to ask him if he knew anything about Kara but all he told them is that his last contact with her was on May 3. That he got a phone call from Kara next day but when he tried to call her back, she didn’t pick up. But when police checked phone call records, they found out that Kara had called him. And right after he had called her back. The phone call lasted about 20 minutes. This happened around 9:20 on May 4, which was odd because the last image of Kara, material from her school surveillance video. She is seen leaving school around 9:21, after talking to Kylr on the phone. When confronted about this lie, Kylr just stuck to his story and never accepted he talked to Kara on the phone. He admitted to being a bit mad at her and kidnapping her a month previous to her disappearance but nothing else. He would never hurt Kara.

On May 9, 2007 Kara was supposed to pick up a pay check from Popeye’s but she never showed up. Then on June 3, almost a month after Kara’s disappearance, police searched Kara’s school locker, there they found her wallet with her debit card inside. It hadn’t been used since the day Kara disappeared. Another thing that would prove Kara didn’t run away is that when looking into 17-year-old Kara Kopetsky’s room all of her clothe and make up was there. If she was to run away, probably would have taken some things with her.

Kylr Yust never accepted killing neither Kara nor Jessica so there is no official crime description except for what he told his friends, that he had choked both of them to death and then placed them somewhere in the woods. .

There is no much to say about Kylr Yust but that he was always known for being a possessive boyfriend. He preferred to see his girlfriend’s dead than in somebody else’s hands.

On July 23, 2007, Missouri police paid another visit to Kylr Just. When asked again about Kara, he said that on the night of May 3, he and Kara had had a fight about a friend from St. Louis visiting her in town for a few days. Police immediately tracked this friend whose initials are J.H. He allegedly told police that he was supposed to meet Kopetsky the weekend after she went missing but she never pick up her phone. J.H only found out Kara was missing after he called her house phone on May 7.

Later, a witness came forward to the police and said that on May 4, the day Kara had disappeared, she had called him to ask if she and Kylr could hang out with him at his house. He told her he was busy but Kylr showed up in his place around 12:30pm to smoke a cigarette without Kara. The wirness then told police that Kylr Yust had called him later crying and begging him not to tell police that he was seeing Kara that day because it would represent problems for him since Kara had a protection order against him. When this witness tried to call Kara himself later that day, it would go straight to voice mail.

Years went by without nothing new adding to Kara Elise Kopetsky’s case. Until April 26, 2010 when a new witness who claimed to had been Kylr Yust roommate back in 2007, allegedly said that seven months before that interview, he was talking to Kylr about relationship problems and Yust had advised him not to get attached to girls and started talking about Kara Kopetsky and how ¨She wouldn’t love him and he was angry¨. Then Kylr admitted to him that he had snapped and that something bad had happened to Kara. Police didn’t take this as a valid tip.

The following year, on January 2011, another witness approached the police. This witness told the police that Yust had confessed to killing Kara Kopetsky by choking her to death and then packing her up and placing her in the woods. This same witness contacted police again on February 4, 2011 and told them that Kyrl had again confessed to killing Kara and watching her have her last breath before placing her in the woods. Police again did nothing with this tip.

A different witness contacted Kansas city Police department on August 9, 2011. She is identified as C.M, Kylr’s ex-girlfriend. She told police that Kylr had her suffering from domestic violence and everytime he was mad he would choke her. Kylr had also bragged to her that he had killed girlfriends out of jealousy in the past and that he wouldn’t hesitate to do it again. So she was there to file a restraining order against Kylr. Once again, police didn’t take this into consideration.

On June 5, 2012, one more witness contacted Belton police and said that in early 2012, Yust had discussed picking up Kopetsky from school that day she went missing because she had an argument with a teacher. Yust allegedly told this person they were having relationship issues and got into a physical altercation when he choked her out. Yust again described watching Kopetsky taking her last breath before he placed her body in the woods.

On October 5, 2016, five years after the last witness contacted police forces, another person called them in regards of Kopetsky’s case. This witness told police that three and a half years earlier, Kylr Yust had told him he chocked Kara Kopetsky to death and no one would ever find her body.

Kylr Yust had been put in jail in 2013 for drug trafficking charges. He was sentenced to three years and nine months in prison and during this time, yet again, a witness identified as a cellmate of Yust’s at the Oklahoma correctional facility contacted Belton police on March 28, 2016, to say that after Yust had been interviewed about the phone records in 2015, Yust had asked him to help him get an alibi and admitted to killing Kopetsky by strangling her and to disposing of her body.

That made seven witnesses in total who gave tips about Kylr Yust being Kara Kopetsky’s killer and none of the seven were considered by the Kansas city Police department. Not even one!

On September 8, 2016, Six days after Kylr was released from jail, he attended a party. He drank a lot and people who attended the event said he was being overprotective and jealous of his friend Jessica Runions, even when she wasn’t his girlfriend. At some point, Kylr and Jessica left the party together.

Police was contacted on September 10, 2016 by Jamie Runions, claiming her daughter Jessica had gone missing. She reported that Jessica had last been seen at a house party in South Kansas city. Jaimie said that her daughter left said party with Kylr Yust.

When looking into it, investigators were told that Jessica and Kylr had last been seen leaving the party at Grandview, Missouri together around 11,pm on September 8, in Jessica’s car,  a black 2012 Chevrolet Equinox with Missouri plates MN2CB.

On September 10, around 1:45 am in the morning, the Kansas city fire department received a call reporting a car on fire in the area of 95th Street and Blue River Road in Jackson County, Missouri. It was Jessica Runion’s car but she wasn’t there.

The next day, Jessep Carter, Kylr’s stepbrother called the police and allegedly told them that he had just been with Kylr and he had confessed of killing Jessica and dragging her body to the woods. He then asked Joseph to help him burn Jessica’s car. Carter told the police he was with Kylr when he set the car on fire and that Kylr had burns on his hands and face. He then took Yust to his house to let him heal from the wounds and immediately called the police.

On September 12, 2016, finally police goes looking for Kylr at 1:36am to take him into custody. According to police, Kylr had burns to his face and hands, which matched Jessep Carter’s story. So they were able to charge him for burning Jessica’s car but not for her murder.

Seven months went by without finding a single trace of Jessica Runions. It was on April 3, 2017, that a mushroom hunter found a set of remains in in the area of 23rd Street and Y Highway in Cass County. A second set of remains was found in the same area in the next day, and police said those remains appeared to be much older.

The second set of remains was identified as Kara Elise Kopetsky on Aug. 16, 2017, at the FBI Crime Laboratory in Quantico, Virginia.

Murder charges for the deaths of Kara Kopetsky & Jessica Runions were filed against 28-year-old Kylr Yust on Oct. 5, 2017. He was also charged with two counts of abandonment of a corpse,

The murder trial was supposed to be on November 5, 2019 bur on June, 2018 Yust’s defense attorney claimed that the trial should not be held in Cass County because of the popularity, the case was all over the crime news. This later changed and it was agreed that the trial would take place in Cass County but the jurors would be brought in from St. Charles County.

There were several other delays as Kylr Yust’s attorney claiming he wasn’t competent to stand trial. Added to this came in the defense’s delayed decision on whether or not to independently test the remains of both Runions and Kopetsky.

The COVID-19 pandemic and several pre-trial motions, including a motion to dismiss the case altogether, from the defence further delayed the trial but it finally took place in April 2021 and lasted two weeks.

Kylr Yust was finally found guilty for Second-degree murder of Kara Kopetsky and the First-degree murder of Jessica Runions, and he was sentenced to 15 years on the first count and to life in prison for the second count.

Jessep Carter was going to be part of the defense witnesses but he was reported dead while being in jail, right before the trial started. The cause of death was ruled a suicide.