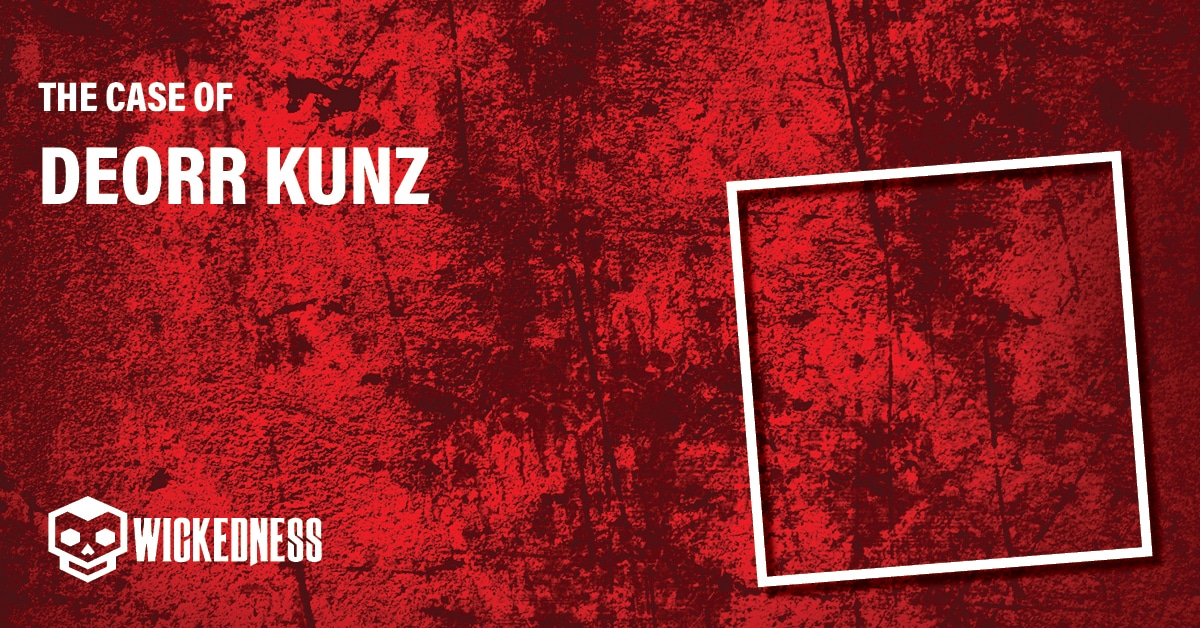 No death has been verified

Who was DeOrr Kunz Jr.?

DeOrr Kunz Jr. was born in Idaho, United States, on December 30, 2012. A boy with blond hair, brown eyes, and very fair skin. He was born healthy and grew up being very active and cheerful until the time of his disappearance.

His parents, Jessica Mitchell and Vernal DeOrr Kunz describe him as a very happy and very normal child who loved to play and watch television. During the 2 years they shared with him before he disappeared, everything seemed to be going very well.

On July 9, 2015, the whole family decided to go on a family camping trip to share with each other, spend some time in nature and go fishing.

Joining the camping trip was Robert Walton, Jessica’s grandfather, whom she had been taking care of since he was quite old. So it was that Grandpa, Jessica, Vernal, and little DeOrr Kunz Jr. set out for Timber Creek Campground.

This place was well attended by the Idaho community, as it was a place with very green and beautiful grass, as well as a creek where people would go with their families to fish.

They arrived at the camp that same night and slept there; after all, it was known that many families did the same thing. The next day, July 10, 2015, Jessica and Vernal DeOrr decide to go fishing in the creek, leaving the boy in the care of his great-grandfather Robert.

Upon returning, DeOrr Kunz Jr. was nowhere to be found. Everything seemed to indicate that the boy had vanished after his great-grandfather lost sight of him.

That was the last they heard of Two-Year-Old DeOrr Kunz Jr.

A family Trip that Ended in Tragedy

On July 9, 2015, Jessica Mitchell and Vernal DeOrr Kunz decided it was a good day to go camping with the whole family. Jessica and Vernal, her fiancé by then, had a two-year-old son, named DeOrr Kunz Jr.

At approximately 6 p.m. that day, the entire family boarded the van, including Robert Walton, Jessica’s grandfather. Because of his complicated health condition due to his age, Jessica cared for him.

While DeOrr Kunz Jr. rode in the van with his parents, Jessica’s grandfather joined them in his SUV, which was towing an RV. On the way to the timber creek campground, Robert decided to stop by Isaac Reinwand, one of the family friends.

Before arriving at the campground, they stopped at a convenience store to buy diesel fuel and some groceries to take with them. The whole family drove more than 180 kilometers north to Leadore, Idaho, then a few more miles to the campground.

The route to get to the campground is a bit rough, so it takes longer than normal. For this reason, they arrived at the site at approximately 9 pm.

Jessica, Vernal Kunz, and little DeOrr Jr. slept inside the van driven by Grandpa that night. While Grandpa slept in the motor home, Isaac, his friend, spent the night inside the tent.

The next morning, after the boy’s parents returned from fishing, they did not find DeOrr Kunz Jr. Neither they nor the grandfather, nor his friend saw where he went. July 10, 2015, was the last time they saw baby Deorr. He disappeared without a trace.

According to some of the family’s testimonies, on July 10, 2015, they got up for breakfast at approximately 10:30 am, after having spent the night in the camp. Jessica recounted that she asked Vernal Kunz to go to the store to get other things that were needed; he went with the boy to town to buy the things he had been asked for.

Upon returning from the store later that day, the couple decided to go down to the creek to go fishing. Jessica, Vernal Kunz, and Isaac, the grandfather’s friend, went to the creek down a hill about 50 meters from where they had camped.

There are many versions of what happened that day, but it is presumed that DeOrr Jr. was last seen between 1:00 pm and 1:30 pm. Everyone went fishing except Grandpa Robert, so the boy stayed with him during that time.

Vernal Kunz, Jessica, and Isaac were distributed throughout the creek to increase fishing opportunities. According to some investigators in testimony, they did not spend much time there.

When the parents decided to return to camp, they noticed that the grandfather, Robert Walton, was alone under a tree. Not seeing DeOrr Jr. they asked Robert where he was; however, he had not realized that the boy was no longer there

The entire family began searching for him for several minutes around the nearby areas, but 2-Year-Old DeOrr Kunz was nowhere to be found. A few minutes after 2 p.m., Jessica called 911 to report her son missing.

While Jessica called 911, Vernal Kunz got in his truck and drove over 600 yards down the road so he could get a better signal and also call 911.

Just then, Isaac returned to the camp, and Robert told him that the boy was missing.

As they waited for the police to arrive, volunteers gradually came forward to search for the boy. Jessica, during the 911 call, described the boy’s characteristics and told them he was wearing a camouflage jacket and blue pajama pants.

July 10, 2015, was the last time they saw baby Deorr, as he was affectionately called. To date, there is no information on where he may be, so he has not been found alive or dead.

His Parents, The Main Suspects

Jessica Mitchell and Vernal Kunz, born and raised in Idaho, were engaged at the time of Baby DeOrr’s disappearance.

According to police investigations following the child’s disappearance, it was discovered that Jessica had two children from her previous relationship, both of whom are in the custody of her former partner.

Neither was found to have a criminal record or criminal history.

Police arrived at the camp minutes after Jessica’s 911 call. Considering DeOrr Jr. was only 2 years old, they assumed he couldn’t have gotten very far on his own.

So they began extensive searches throughout the area to find him. Since the camp was close to dense pine forests, they assumed that Baby DeOrr may have gotten that far and may have been the victim of an domestic animal attack or a wild animal.

Police were deployed for days and weeks, searching the woods, the surrounding area, the creek, and even using sniffer dogs to find DeOrr Jr. but came up empty.

Many neighbors, family members, and friends of the family also joined the search, but nothing came up.

While massive searches were being conducted, police interviews with family members began to be a bit confusing. The testimonies of his parents, his grandfather, and his friend were a bit brief, so they gave versions that did not coincide with each other.

The fact that there were no findings or solid evidence during the searches, the police could not rule out a kidnapping scenario, so the family members became the first suspects.

Lemhi county sheriff said that during the investigations and interrogations, DeOrr Jr.’s parents repeatedly failed lie detector tests and that their versions varied as they gave their statements.

While Jessica, Baby DeOrr’s mother, claimed that she had left the child in the care of his grandfather, Robert Walton, he stated that at no time did he ever hear that the child would stay with him while they went fishing.

On the other hand, although it could be corroborated that the child’s father did go to the store and the purchases of items were verified by checking his credit card, there were no witnesses who could affirm having seen the child, neither in the stores nor in the gas stations where they were.

While the testimonies of Baby DeOrr’s parents and great-grandfather seem to vary, again and again, the police stated that Isaac Reinwand’s version was the most credible and the one that held up as they asked him questions.

Isaac claimed that DeOrr Jr. was alive the two days they were at the camp, however, the man apparently had certain cognitive disabilities that did not allow him to give many details about what the boy was doing on the day of the disappearance.

Jessica and Vernal Kunz retained the services of a private investigation firm; however, they also failed to find a lead that could lead them to Baby DeOrr’s whereabouts.

The boy’s parents tried to accuse Isaac, the grandfather’s friend, since they had never seen him until that day at the camp, telling different versions of the man’s strange behavior during those days, but nothing could be proved.

However, Isaac was ruled out as a suspect because his version was the only one that remained the same until the end. Robert Walton, the boy’s great-grandfather, was also ruled out because of his senile condition.

Many of the details and versions of the child’s parents could not be verified. Although Vernal Kunz said that even the store clerks had greeted the boy when they went to buy what he needed, people denied seeing DeOrr Jr.

No Arrests or Charges

In light of all the discrepancies in the testimonies of Jessica Mitchell and Vernal DeOrr Kunz, in January 2016 they were officially announced as suspects in the disappearance of 2-Year-Old DeOrr Kunz Jr. Despite this, neither has been arrested.

Baby DeOrr went missing on July 10, 2015, and to date, there have been no leads or information leading to his whereabouts. Since 2015, police have been conducting annual searches, which have yielded no positive results.

As no crime has been proven so far and only theories are being bandied about, no arrests or prosecutions have been made. The disappearance of DeOrr Kunz Jr. garnered national media attention, and to this day, an age-progressed picture continues to be published showing what DeOrr Jr. might look like today.

Baby DeOrr Kunz Jr. went missing on July 10, 2015 during a camping trip with his family.

Did they ever find DeOrr Kunz?

So far there is no trace of DeOrr Jr. The case remains open and there are no leads.

Baby DeOrr was abducted by his parents?

In January 2016 the former Lemhi County Sheriff named the boy’s parents as suspects. However, so far they have not been arrested or charged.