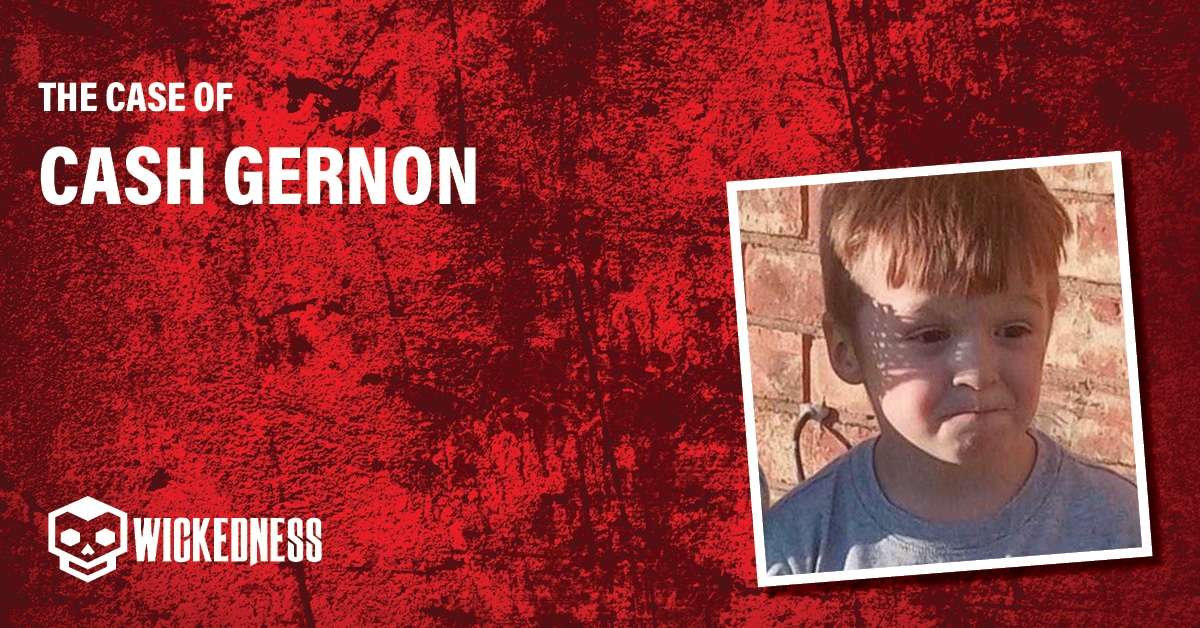 Cash Gernon was a lovely 4-year-old with ginger hair, the son of Trevor Gernon and Melinda Seagroves. Cash had a twin brother named Carter, as lovely as him. Cash loved superheroes; he particularly liked to mimic Iron man. Cash was described as an outgoing kid, always smiling,

Cash’s parents Trevor and Melinda separated sometime in 2020 and Trevor kept custody of both toddlers. He moved to Dallas, Texas, with them and would eventually meet Monica Sherrod; who he started dating at some point. Trevor and Monica moved in together; so Cash lived with his dad, brother, Monica, and her four kids on the 7500 block of Florina Parkway, at Mountain Creek, Dallas County.

In March 2021, Cash’s father Trevor left Texas in his attempt to escape being arrested for felony drug possession charges. He later claimed he left his two kids with Monice because he didn’t want to disturb their routine. Cash and Carter had gotten used to living in that house, in that town with Monica and her children. Also, he believed it would have been irresponsible of him to take them with him while on the run.

From then on, Monica became their caretaker. Cash and Carter had a room for themselves with a crib in which both of them slept together. Monica always had a baby monitor camera in their room.

Morning of May 15 on 7500 block Saddleridge Drive

On the morning of May 16, around 7:00 am a mountain Creek woman named Antwainese Square is out starting her day jogging in the 7500 block in the Mountain Creek area, Dallas. She sees something bloody at the side of the road; at first, she thinks it’s a dog, but as she gets closer to the scene, she sees two little hands and two little feet. It was a boy. He had no shirt on, no shoes, and he was covered in blood from his upper body all the way up to his face.

She also noticed the little kid’s feet were covered in ants. She starts screaming and crying for help and calls 911 around 7:00 am. Police arrived immediately, but they can’t recognize who the boy was. There were no reports of missing kids or anything. They start knocking door by door, asking everybody if any of their kids are missing… but nothing.

Morning of May 15 at Monica Sherrod’s House

The morning of May 15, 2021, was supposed to be like any other night; Monica and the kids were asleep, nothing out of the ordinary. Around 10 am that day, Monica wakes up and discovers that Cash Gernon is not there. Little twin Carter tells her Cash wasn’t there when he woke up. So she starts looking for him all over the house, calling out his name, asking him to please stop hiding and get ready for breakfast, and saying that the game wasn’t funny anymore. But Cash wasn’t there.

Finally, around 11:00 am, Monica dialed 911, intending to report him missing. Police get to her house immediately and start questioning her. Maybe because they saw pictures of Cash or because they saw his twin, police were able to connect Cash’s disappearance with the little boy found murdered 8 blocks away. Yes, little Cash Gernon had been killed.

Cash Gernon was taken from his own crib in the early morning of May 15, 2021. Darriynn Brown kidnapped, beat, and brutally stabbed little Cash to death. The weapon used has only been described as “an edged weapon.” The reasons for this horrible attack are still unknown.

Darriynn Brown was not a stranger to the Sherrod family. Kamron Mori, Monica Sherrod’s 18 years-old-kid, said he knew Brown from Duncanville High School and middle school. He said they had been friends before.

18-year-old Darriynn Brown was popular in the neighborhood but not for good reasons; he was known to be a weird and problematic person; several neighbors said they’d previously reported Brown to police for bizarre or suspicious behavior like wandering around their houses very late at night, vandalizing their vehicles and in some cases even threatening some their lives.

Police started questioning Monica and her children, and after a while of trying to find out who would want to hurt Cash and why the kids reminded Monica about the baby monitor she keeps in the twin’s bedroom. So she gives the camera to the policemen. While they are going through the surveillance footage, they realize they had caught Cash’s kidnapper on the video.

They saw how at 4:58 am, a man entered the kids’ bedroom and just stood there looking at them. He moves closer to the crib, hovering over Cash. He then pulls the blanket off Cash, picks him up, and leaves with him. What horrified the police and Monica was that they continued watching the footage and saw the same man at 7:30 am returning to the bedroom. Again he is hovering over Carter. He acts strange and nervous, as if trying to make a decision. He then tries to pick Carter up, but apparently, something he hears stops him, and he leaves the house alone.

Monica recognized the man in the footage. It was 18-year–old Darriynn Brown, an acquaintance of Monica’s older son, Kamron Mori. She also recalled that Brown had visited her family’s home a few days before the homicide and that he’d interacted with Cash. That made her angry and told him to stay away from her kids.

Later that day, police went to Darriynn Brown’s residence where he lived with his parents. By 10:00 pm that night, Brown was taken to the law enforcement wing of the Dallas Children’s Advocacy Center for an interview before he was booked into jail. Police also collected a hoodie, shoes, and sunglasses to be examined. Those items seemed to be the ones he was wearing when captured in the video kidnapping Cash Gernon.

Darriynn’s mother, Mimi Brown said her son was home all weekend and could not have kidnapped the boy. She also mentioned her son is a patient of Metrocare Services, which provides mental health care to children and adults. She said

“Darriynn is very kind, I feel that he’s being framed.”

After learning that police had taken Brown in for questioning, a man came forward. He claimed that just a few months before the incident, On February 8, 2021, 18-year-old Darriynn Brown had tried to take his 2-year-old granddaughter from his home. The older man said he caught Brown entering his house. He yelled at him to leave but Darriynn made his way to the living room where the little girl was asleep on the couch; he picked the kid up and took her to the laundry room.

The man runs over to the intruder, takes his granddaughter away from his arms, and forces the intruder to leave. He pressed charges, but at the time, he didn’t know who Darriynn Brown was so the police couldn’t find the suspect. The older man added that a couple of weeks after the incident happened, he was grocery shopping at Walmart when Brown approached him and apologized for breaking into his house, trying to take his granddaughter. The man had no news about the man until Cash’s case went public.

Melinda Seagroves and the general public believe that Monica Sherrod is somehow involved with the four-year-old boy’s murder since the police never found any sign of forced entry to her house. The fact that she didn’t notice he was gone until 10:00 am and that taking a look or handling the surveillance footage to the police wasn’t her first reaction makes everybody believe she’s suspicious. No evidence linking her to the murder has been found whatsoever. Darriynn was always the only suspect.

In early June 2021, Brown was charged with Kidnapping and burglary charges on Cash Gernon’s case; and with burglary and injury to an elderly person for the incident of February 8, 2021. If convicted of capital murder, Brown was going to face lethal injection or life in prison without the possibility of parole. Dallas County prosecutors said they would seek the death penalty.

In late June 2021, after forensic analysis results, Police filed the capital murder charge, writing in an affidavit that a hoodie, shoes, and sunglasses seized from Brown’s bedroom tested positive for Cash’s blood.

On Monday, August 2021, a Dallas County grand jury handed up the indictment of Darriynn Ronnell Brown in the slaying of Cash Gernon. And Heath Harris, Brown’s defense attorney, requested a mental evaluation of his client. He insists Darriynn suffered from a serious mental disorder.

In 2022, after conducting two different mental evaluations: one from the defense’s doctor and the second from the prosecution’s own psychiatric expert, Darriynn Brown was found incompetent to stand trial. Heath Harris, defense attorney, said Brown will and deserves to be admitted in Vernon Psychiatric Hospital, where he can finally get the help he needs.

The case will remain open until Darriynn Brown is deemed competent to stand trial. Sadly that may never happen.

Where is Trevor Gernon?

Even after his 4-year-old Cash Gernon was murdered, Trevor continued hiding so he wouldn’t be taken into police custody. But in June, 2021 was arrested and placed in a residential rehab program.

Trevor released a video from his sister’s YouTube account on May 2021. He apologized for his absence before and after Cash’s murder. He said

“I have paid the most ultimate and painful price for my poor judgment and I have to live with this devastation every single day. I will never forgive myself. If I could, I would go back and do everything different. This is a nightmare that doesn’t go away once I open my eyes in the morning. We just don’t understand how this could happen to such a bright and cheerful kid.”