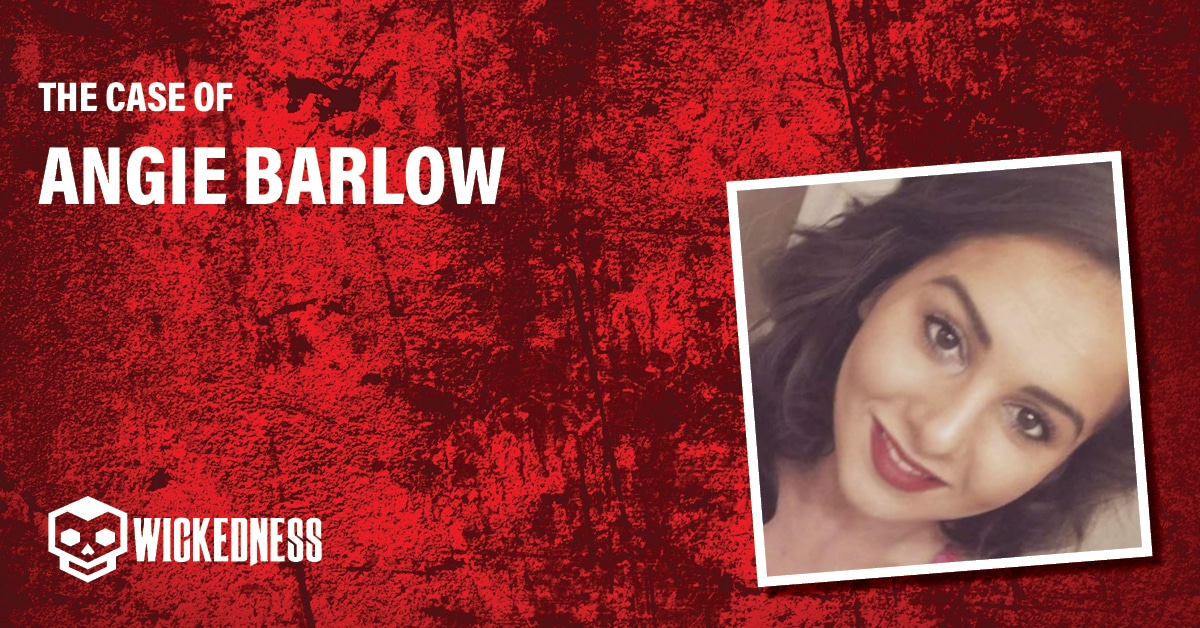 The backyard of a home at East 43rd Street in Indianapolis

Angela Barlow was contacted to dance at a private party, and she disappeared the next day. Eight months later, her body was found buried in the backyard of a home in Indianapolis. This case has left her family and authorities with more questions than answers.

23-year-old Angela Jeana Ann Barlow was fearless and fiercely independent. She was a free spirit who took every opportunity that life presented her. Family and friends described her as being full of life and love.

On October 26, she was headed to an apartment complex in Indianapolis. Angie Barlow worked as an exotic dancer and was scheduled for a private party. She had been contacted by text. The message said the event was a surprise anniversary gift, requested that Angie wore matching lingerie in black or red, and gave the security code for the apartment gate.

Barlow lived with her friend 24-year-old Mona Jackson. Angie had just gotten back from an expensive trip to Miami, and she needed the extra cash to cover her half of the rent. On her way to the party, Angie sent Mona a text with a screenshot of the address and jokingly told her she would know where she was if she went missing. At 11:45 PM, Angie posted a story on her Snapchat; it looked like she was at the party, and she seemed to be having a good time.

The next day no one had heard from Angie. Her friends and family called and texted her multiple times. Angie’s mother, Christina Kramer, went to her apartment to look for her. Angie wasn’t there, and her mother found that her dog, Pablo, had no food or water. Her mother found that very concerning. Angie loved her dog and always took good care of him. Christina believed she hadn’t come home the night before, and Angie Barlow was reported missing.

Mona Jackson went to the apartment address where the party was the night before. She tried entering the front gate code from the screenshot that Angie had sent her. The code didn’t work, so Mona climbed over the gate. When she arrived at the apartment, she found that no one was there and it had been cleaned out.

The Indianapolis Metropolitan Police retrieved a copy of the surveillance footage from that night. Angie’s car was seen leaving the apartment complex at 3:30 AM, and another black vehicle was following right behind her. The police were unable to see who was driving both cars, but they were able to get the second car’s license plate. The vehicle belonged to Raven Miller.

The police discovered that Raven Miller was the one who contacted Angie about the anniversary party for her boyfriend, Baron McCullough. Angie knew both of them from Club Rio, a local strip club where she danced. She had also dated Baron for a short time in the past. The relationship between them hadn’t ended well, and Angie’s family and friends believe that she wouldn’t have gone if she had known the party was for him. One Indianapolis Metropolitan Police Detective thought that she might have been tricked into going and speculated that they might have had someone else answer the door so Angie wouldn’t know; this indicated other people were involved.

The police questioned Raven Miller and Baron McCullough. The couple insisted that Angie had left the apartment alive. Since there was no contradictory proof at the time, the cops had no choice but to release them. The couple moved to Arizona shortly after.

Angie’s friends and family immediately began looking for her. Mona Jackson contacted her parents, Stephen and Christina Kramer, and they organized a search party and distributed missing person fliers. Her parents paid for billboards offering a $5,000 dollar reward.

Angie’s car was found twelve days after she went missing. It was abandoned eight miles from the party address. The vehicle was badly damaged, but there was no sign of Angie. A liquid substance was found inside the car, and DNA swabs were taken. Since this is still an ongoing case, what they discovered in the vehicle has not been released.

A peculiar incident happened a few months after Angie disappeared in her hometown of Muncie, Indiana. Angie’s grandmother, Sharon Barlow, had $8,000 dollars withdrawn from her bank account.

Muncie police arrested multiple people while serving a search warrant in connection with Angie’s case. One of those apprehended was Michelle Brown, who was arrested on fraud-related charges. Brown told investigators she didn’t know Angie’s grandmother but knew the bank’s routing number and chose her account number by chance. The Muncie police thought that was suspicious. They wondered if Angela knew the account numbers and how Michelle Brown got the information.

The police also arrested three other people on various unrelated charges. Angie’s parents are left asking themselves if these four people know anything about their daughter’s disappearance. Officials believe there is a connection, but they haven’t been able to find one yet. They are also considering the possibility of a bigger conspiracy involving those arrested and Raven Miller and Baron McCullough. So far, the police don’t have any direct evidence linking the people or circumstances together.

Eight months after Angie went missing, the police received an anonymous tip. They were told that Angie was dead and was given the location of her body. When the police obtained a search warrant, they went to the address. They found a man was living there, but he had just moved in. The police didn’t view him as a suspect. The house had been abandoned for quite some time before he moved in. However, the home had once been rented by one of Baron McCullough’s family members, and it was only ten miles from where she disappeared.

The police found Angie’s body in a shallow grave in the backyard. Angie had to be identified by her tattoos due to the level of decomposition.

The police speculate that Angie may have been killed at the apartment, and someone else possibly drove her car to dump the body. The cause of death has not been released due to the ongoing investigation.

There has been very little progress with this case since Angie’s body was found. Her family and friends are hoping for answers they may never get. There are still many unanswered questions for authorities and her loved ones.

However, the detectives working the case haven’t forgotten about Raven Miller and Baron McCullough, who last saw Angie alive. They believe that they’re still persons of interest. They hope someone else who was at that private party that night comes forward because one of them knows what happened.

What happened to Angie Barlow?
Angie Barlow went missing after attending a private party. Eight months later, the police received an anonymous tip, and her body was found buried in a shallow grave. The details of her death have not been released since this is an ongoing investigation. No one has been arrested or convicted for this crime.

Where did they find Angie Barlow?
Angie Barlow was found eight months after she disappeared. She was buried in the backyard of a home on East 43rd Street in Indianapolis, ten miles from where she went missing.