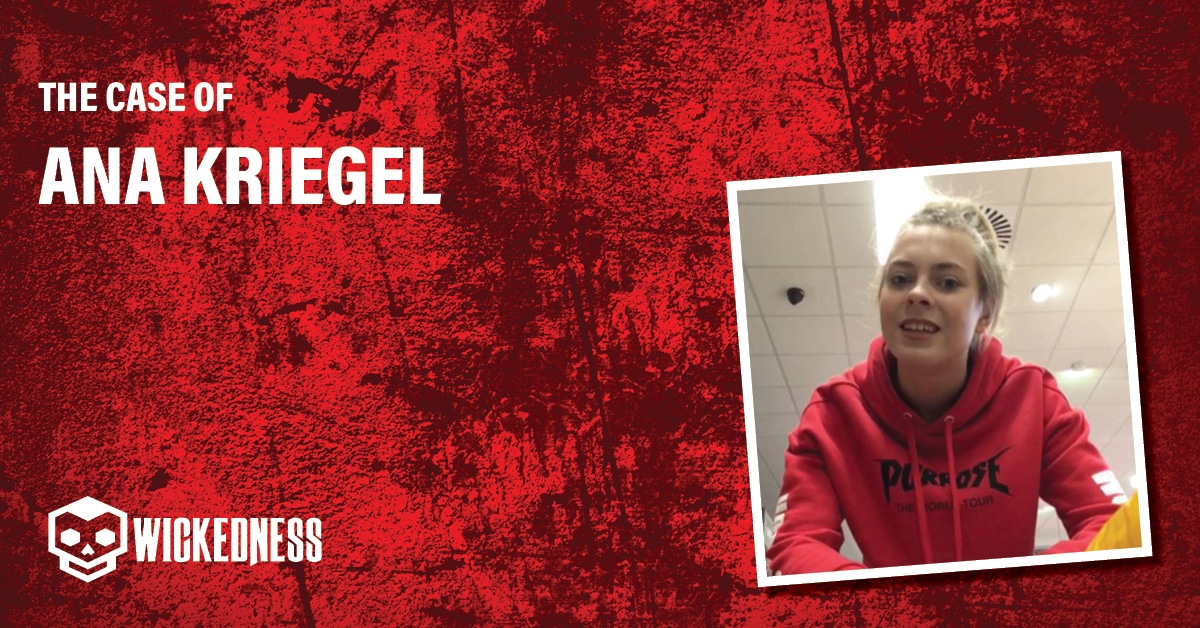 Ana Kriegel’s 14 years old body was found inside an abandoned house after being raped and beaten to death by two teenagers: Boy A and Boy B

Victim and circumstance when case began

14 years old Ana Kriegel was a schoolgirl just like any other, she loved dancing, singing, using social media platforms and spending time with her family. She was born in Russia but adopted when two years old by an irish woman named Geraldine Kriegel and her French husband Patrick, they both lived in the Lucan county, Dublin, Ireland, where Ana would grow up. Later, when she was 5 years old Ana Kriegel’ would struggle with a tumor in her right ear. Operating on the tumor was the solution but it left Ana almost deaf on of that side and it also affected her sight in her right eye. These events didn’t stop Ana from being a loud, happy, sometimes cheeky kid. She was often described as being beautiful caring funny and always a loving princess.

Even though Ana was a great kid she became a prime target for bullies in school. Not only they would bully her for being adopted and having hearing problems but also because she was taller than most kids her age, this was due to a condition where bones grow quicker so she was taller and looked older than her actual age. All of these would just bring sexual and mean comments towards Ana Kriegel’ in school and receive hateful messages through social media, particularly on Youtube, where everytime she posted a video she would receive messages like ¨Go die¨¨We will execute you¨, etc. This led Ana to become a loner and unsettled teenager, always stressed in school, even talking about committing suicide and self-harming.

Ana would still enjoy her life with her parents and close family all the time. They were her friends. On May 13th, 2018, a day before she disappeared, they had a family celebration and while the adults were having drinks, Ana Kriegel’ and her cousins took time to record some Youtube videos. The week ahead for Ana was going to be a hard one because she had lots of exams. .

The morning of may the 14th was a normal one, Geraldine, Ana’s mom, woke her up to go to school, left her a note saying that she could leave school early to attend her counselling. Later in the afternoon, Ana went back home, her father Patrick was there so they just had some chips and enjoyed the sunshine. Around 5pm, Patrick would hear a knock on the door, it was a teenager looking for Ana, He let Ana know somebody was looking for her and her reaction was of confusion, as to why that person was looking for her. She went to the door and Patrick just let them to it, he tried to hear a bit of the conversation but they were whispering so nothing he could understand really. A couple of minutes later, Ana would go upstairs, grab a black hoodie and walk out the house with the boy. Her father asked her if she was not planning to stay and study for her exams, she just replied that she wouldn’t take long and she looked very happy and excited. That would be the last time Patrick would see his daughter alive.

When Ana’s mother gets back home at twenty past five and hears what happened from Patrick, she immediately gets concerned because nobody ever called for Ana, so she knew something was wrong.

Geraldine tried texting Ana several times, just to see if she was ok but Ana wasn’t answering. This was very unusual because even when Ana was mad at her mother, she would send a text saying ¨I’m not talking to you¨, so Geraldine decided to send something that would in definite get Ana’s attention and wrote ¨Answer now or I’m calling the police¨ but no resply to that either. After this, Geraldine went to the local park to see if Ana could be around but she was nowhere to be seen. Together with her husband they drove around the estate and surroundings but no luck. They would report Ana missing to the Irish police – Garda – at 9pm and give them the name of the boy Ana left with so they could ask him what happened- For future references we will call him Boy B- but all boy B said when interrogated is that him and Ana parted ways in the park and that was the last time he saw her, so he had no idea where she could be now.

The next day Ana’s family continued looking around to see if they could find her but again no luck. The police went back to boy B’s house to see if he could give them more details about the previous day with Ana, so he told them that he went to meet Ana to take her see his other friend who – he said- Ana had a crush on but it wasn’t corresponded so this other boy .Who we will refer to as Boy A from now on – was going to let her down gently so he sent boy B to bring Ana to him and talk to her.

The Garda took both boy A and boy B to the park to show them where exactly they had taken Ana and all the spots the walked over with her. What was strange is that both declarations were different and confusing added to the really weird looks the boys were giving to each other. To all this, boy A presented some injuries and was limping too but when the police asked him about it he said that shortly after leaving Ana that afternoon, he was jumped by two older guys but he ended up kicking them in the head and escaped. Both boys kept saying they had no idea where Ana was, they were both 13 years old.

After looking at 700 hours of CCTV, the police realized that none of the boys were in the places they said they were on the late afternoon and night of May the 14th. They continued looking for Ana everywhere around the park and on May 17th, they noticed that inside the park there was an abandoned house called the Glenwood house. After just getting in, one of the detectives said it smelled like dry blood. This house had all the windows covered so it was very hard to see inside even at daytime. The detective saw what he described as a figure but it was hard to tell if was a mannequin or ¨something terrible¨, when he moved closer to it he would realize it was a naked young girl. As you may suspect, this was the body of Ana Kriegel. So this was no longer a missing person’s case, it was a murder investigation.

After having Geraldine and Patrick officially identifying Anna’s body in the morgue, they were told Ana Kriegel had around 50 injuries in her body but she died from blunt trauma to the head and neck and there was also sign of sexual assault. The medical examiner said there was evidence of Ana fighting hard to defend herself, she had cuts and bruises all over her body, she had tape wrapped around her neck and she was naked except for her socks. Detectives described the room where Ana was found in as being saturated in blood together with all her belongings like clothe, iPhone and acrylic nails which were all around the place covered in blood as well. They searched the crime scene for fingerprints but they could only find Ana’s. As for the murder weapons, they found a piece of timber that was burnt on both ends and a 9inch piece of concrete that had matted hair and blood on it. According to the blood patterns they said Ana had probably been attacked when she first walked into the room and more after she had run closer to the window area.

Boy A & Boy B not Details

Boy A and Boy B were still the last ones to see Ana Kriegel alive and because they were 13 years old, police had to notify the parents that the boys would be arrested 24 hours before it happened and even the car they used to take them to the station was an unmarked car and police were wearing civilian’s clothe. Garda also searched the boy’s homes and took a backpack from Boy A’s house. The backpack contained a zombie mask, a snood, shin pads, knee pads and gloves. Ana’s blood was found on every item. The boots he was wearing on May 14th were also examined and they had Ana’s blood on them as well. Everybody was disturbed when searching boy A’s phone web browser history, it had a video of ¨the 15 most gruesome torture methods in history¨, he had also searched for Jeff The killer, a creepy pasta about a teenager who becomes a serial killer and even when maybe all these things don’t seem out of the ordinary, what really worried the police was that he had also been searching for abandoned places in the local area.

Because of the age of the two boys, it’s forbidden to release any information as their name, how they look or anything, so all we know about them is what happened during the investigation.

Both boy A and B were taken in for questioning in separate rooms. Police tried to corner boy A telling him about Ana’s blood being found on his belongings but to all of this he would just answer ¨No idea, no comment¨. On the other hand, Boy B, continued trying to make up stories of what other people did to Ana but eventually the investigators worn him out and got him to talk. Boy B said that once he took Ana into the abandoned house’s room, Boy A asked him to leave and grabbed Ana by the neck and started choking her and tearing her clothes apart. Ana Kriegel started crying and begging him to please not do this, please no.

On May 25th 2018, boy A was charged with Ana Kriegel’s murder and on July the 12th 2018 boy B was charged with her murder too. They were both released on bail in august to wait for the trial.

The trial began on April the 30th and it lasted six weeks. Both Boy A and boy B were being accused of Murder and Boy A was also being accused of aggravated sexual assault. They pled not guilty but after all the evidence presented and 14 hours and 25 minutes deliberating, the jury would have a fair verdict.

It was only after being taken to a detention centre that boy A admitted to have killed Ana but still denied raping her.

Why boy A and boy B can’t be named?

Children’s Court rules still applied to Ana Kriegel’s case as boy A and boy B were both 13 years old when they killed 14-year-old Ana in May 2018.

These rules meant neither of the boys could be named in media coverage of the case and there were strict reporting rules to prevent them being identified, even just by association. These restrictions meant, for example, journalists reporting on the trial could not name the school the boys went to.

What are the penalties for releasing information about boy A and boy B’s identity?

According to law, anyone found to have identified a young offender could be liable on summary conviction to a fine of £1,500 or a prison term of up to 12 months, or both. If the breach is considered more serious, on conviction on indictment a person could face a fine of up to €10,000 and/or up to three years in prison.