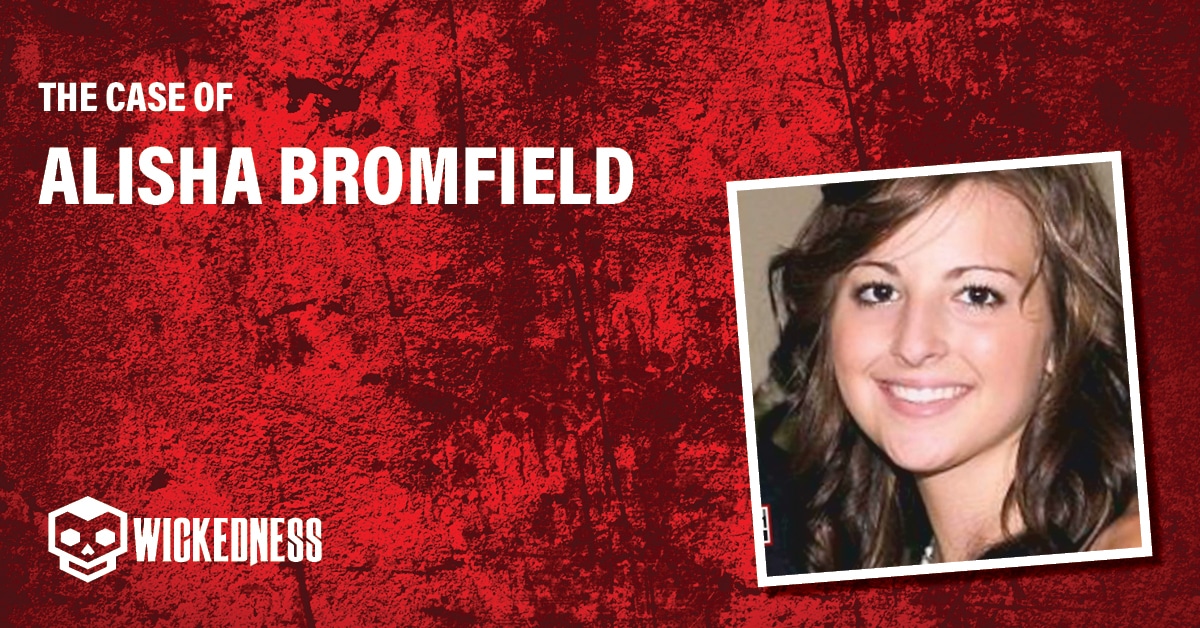 Who was Alisha Bromfield?

Alisha N. Bromfield was born on August 28, 1990 to her parents, Sherry Anicich and James Heisner. Alisha had one sister, Breonna and three brothers, Luke, Chase and Coleton. Friends and family described Alisha as giving and ready to help whoever she could. Her mom said that she also liked to have fun, loved to laugh and she didn’t take life seriously.

In 2008, Alisha Bromfield graduated from Joliet Catholic Academy and at the time of her death, she was one semester away from graduating with degrees in forensic psychology and criminal justice at Western Illinois University.

In 2012, Alisha found out that she was expecting a baby. The father was someone she’d met in college and even though he wasn’t going to be around, she wanted to work hard to provide for her daughter. Even though she was scared at becoming a single mother, she was excited to become a mom and she was looking forward to welcoming her first child. Alicia learned that she was expecting a baby girl and named her Ava Lucille.

From the age of 16, Alicia had worked in the flower department of Home Depot. She’d always been a hard worker but since learning that she was pregnant, Alisha worked harder than before so she could give her daughter everything she needed.

Alisha Bromfield’s supervisor was a man called Brian Cooper. He’d been her supervisor for five years and he was in charge of the tasks she’d complete and what days or hours she would work. They mostly saw each other in work, however Alisha would walk his dog occasionally.

It was known that Brian would create a hostile work environment for Alisha. He would call her names in front of her colleagues and even customers, such as “slut” or “whore”. There were also occasions where he’d throw things at her and he was also known to monitor her activity outside of work too. Brian also told colleagues that Alisha was his girlfriend. She had made it pretty clear that she wanted nothing to do with Brian other than a work relationship but this would make him angry. If Alisha ever refused to carry on a task he had set her, he would threaten to fire her and she really wanted to keep her job.

Complaints had been made against Brian but his supervisors didn’t seem to take it seriously. It seems that the only actions they took were to send him home early and advise him to take anger management classes but this was never followed up on.

In 2012, Brian made one of his requests to Alisha. He asked her to accompany him to his sister’s wedding, which was taking place four hours away in Wisconsin. At first, Alisha said she couldn’t make it but Brian threatened to fire her if she didn’t go and this unfortunately convinced her to go.

On August 18, 2012, Alisha and Brian drove four hours to Door County in Wisconsin. Brian was going to be walking his sister down the aisle and he said that it was important that he had a date. The wedding went well and Alisha and Brian stayed at the reception until well after midnight. Brian had become intoxicated and when they went back to their hotel room, the situation became fatal.

Alisha Bromfield Was Found Dead/Start of The Crime

On the morning of August 19, 2012, a completely drenched Brian Cooper walked into a gas station and asked the person behind the counter, Denise Bhirdo, to call 911. Denise did so and when she passed the phone over to Brian, he said that he’d witnessed a murder. When the operator asked if he knew who committed the murder, he calmly said “I did.”

Police arrived at the Sand Bay Beach Resort and entered the room Brian and Alisha were staying in. They found Alisha on the floor with her head on a pillow. She was naked but had a blanket draped over her body. Scratch marks and bruising were visible on her body, indicating that she’d put up a fight.

Alisha Bromfield and Brian went back to their hotel room after leaving the wedding. They immediately began arguing but that wasn’t the first time that day that they’d argued. Before the wedding, Sherry had received a phone call from her daughter to say that she’d argued with Brian and she would be returning home. Sherry thought this was strange as Brian was supposed to walk his sister down the aisle but when she text Alisha later that day, Alisha said that she was fine and they were staying.

Brian told police that the reason behind the arguing was the status of their relationship. He wanted a romantic relationship but she’d made it very clear that when they got home, their friendship was over. She’d had enough of Brian’s behavior. Alisha eventually decided to go to sleep as she was going to have to drive them home in the morning.

After Alisha Bromfield had gone to sleep, Brian drank some more and began pacing the room. He was worried about what would happen when they got home. Brian had told some colleagues that he was in a relationship with Alisha and he knew that he’d be caught out when they got home. Alisha woke at some point and he asked her if she’d like to go to a show with him on Sunday when they got home. She said no and told him again that their friendship was over.

Brian saw red and jumped on top of Alisha. He started strangling her while she was lying face up on the bed. She tried to fight him off and begged him to stop, telling him to think about her baby. Alisha bit his hand which caused them to roll off the bed. Brian didn’t stop though and he continued to strangle Alisha Bromfield until she stopped moving.

After Alisha Bromfield had died, Brian said that he wanted to see her naked. So he removed her clothes and raped her. He then claims that he tried to kill himself but he couldn’t go through with it so he slept in the bathtub. He tried again the next day, by trying to drown himself in the bay but he was unsuccessful. This is why he was soaking wet when he walked into the gas station.

Brian M. Cooper was known for being a “creep” but no one took it seriously. As mentioned above, his supervisors advised him to take anger management classes but this wasn’t followed up on and Brian didn’t attend any classes. They also sent him home early a couple of times but this didn’t do anything to alter his behavior.

A previous employee at Home Depot claimed that Brian acted this way with her and that’s what caused her to quit. She said that he’d make a comment about his genitals to her and rubbed himself up against her on multiple occasions. She informed the group leader who told her that there had been numerous complaints against Brian by other female employees. But the group leader was also a female and she felt uncomfortable around him herself.

After Brian had made the 911 call confessing to Alisha Bromfield’s murder, police arrested him at the gas station he’d made the call from. Brian was taken to the station for questioning and that’s where he gave police a detailed account of what had happened to Alisha.

Because Brian had confessed to the murder and the crime scene matched his version of events, the police didn’t have much investigating to do.

36-year-old Brian Cooper was charged with two counts of first-degree intentional homicide and third-degree sexual assault of a corpse.

Despite Brian confessing to the murder, he entered a not guilty plea in court.

The prosecution played the 911 call in court and also showed stills from the camera that Brian had installed in his bathroom. They said that he was obsessed with Alisha and he couldn’t bear the fact that she had turned him down multiple times. Friends of Alisha Bromfield’s testified that the reason she hadn’t quit was because she liked her job and she wanted to be able to provide for her daughter.

The defense claimed that Brian was not guilty because of voluntary intoxication. They said that he didn’t know what he was doing that night. The prosecution batted back, claiming that if that was the case, how was he able to describe the murder in such great detail?

At the first trial, the jury couldn’t come to a unanimous verdict on the two murder charges and it ended in a hung jury but they did find him guilty on the sexual assault charge. A mistrial was declared and a second trial was held for Brian Cooper.

Brian M. Cooper was found guilty on both first-degree intentional homicide charges as well as the third-degree sexual assault with a corpse charge. He was sentenced to life in prison.

After Brian was found guilty, Sherry Anicich campaigned to have voluntary intoxication defense use removed from Wisconsin law. She achieved this and 31 other states followed suit.

How old was Alisha Bromfield?

Alisha Bromfield was 21 years old at the time of her death.

Where is Brian Cooper now?