The evil eye is undoubtedly one of the strong symbolic images in the entire world and it has been a part of almost all cultures across the globe since ancient times. People wear different types of evil jewelry including glass beads, bracelets, and necklaces to ward off the evil eye.

This article discusses everything you need to know about this concept including why it’s a part of many cultures and religions including Buddhism, Hinduism, Judaism, Christianity, and Islam.

What Does the Evil Eye Actually mean?

The meaning of the evil eye is a hex or curse on an individual by a malevolent glare. A curse cat upon someone with a malicious glare is known as “Mati” in Greek culture. It’s believed that the evil eye causes loss or bad luck to the unaware receiver.

Generally, people believe that there are three different types of evil eyes.

History of the Evil Eye

The belief in the evil eye dates back to (about 3,000 BC) ancient Rome and Greece according to the earliest known evidence of the concept. The concept of the evil eye curse is also mentioned in the Quran and Bible.

People believe that it can lead to bad luck and physical and mental illness and people from all corners of the world including Central America, Europe, the Middle East, and Europe fear this symbol. In Islamic culture, taking a bath regularly and keeping oneself clean protect an individual from evil forces.

Just like Greeks and Roman Ashkenazi Jews believe that excessive praise and too much fame work as a weakness in the evil eyes. In Brazilian culture, the evil eye is known as the “Fat Eye”. The evil eye originated in that culture with the idea that only insincere compliments can cause bad luck or harm.

The evil eye myth originated in Europe with the idea that people who are given an envious, malicious, or evil gaze will fall victim to bad luck, injury, or loss.

What Does it Symbolize?

We all have seen the ancient symbol of the evil eye countless times. You might have also seen a person wearing an evil eye necklace, evil eye bracelet, evil eye pendant, or even just keeping an evil eye charm. But do you know what these evil eye symbols mean and why evil eyes are so popular in so many cultures?

To put it simply, an evil eye symbol primarily promises to keep the person safe and protected from ill will and misfortune. It’s considered to be the most important thing to fulfill your dreams. The evil eye protection is truly a mystical concept as a person wearing it believes that it’ll keep them safe and sound from evil spirits all the time.

The design of most evil eye jewelry pieces is simple as they come with an eye in the middle and blue background. However, people also use evil eye bracelets and other types of jewelry that come with expensive and beautiful stones.

Evil Eye in Talismans and Amulets 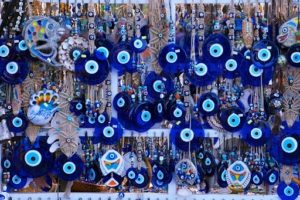 Other than evil eye jewelry, people also use other methods to protect themselves from evil spirits and powers. Using evil eye talismans is one of the most popular methods in many cultures, to reflect or dissolve the evil look power.

The evil eye amulet originated in Greek culture but now it’s used in many places of the world including the Middle East. There the evil eye amulet is known as “Nazar” and it’s styled with concentric blue, dark purple, and white circles.

The Hamsa represents pretty much the same benefits and it’s known as an equally powerful charm to the evil eye. It’s a more prevalent type of evil eye amulets in the Middle East and Africa.

The idea behind the evil eye remains the same and it still has a powerful influence on pop culture and modern life to this day. People still believe that just an evil gaze can bring an actual disaster to people.

The evil eye probably has the strongest roots in African and Turkish cultures and it’s imprinted in the everyday life of people belonging to these cultures. You can see evil eyes hanging from the necks of farm animals and newborn children and in offices and homes as protection against the evil eyes.

The most popular colors of the evil eye are light blue, deep blue, and indigo blue. The evil eye with the light blue color is believed to broaden your perspective, give solitude and peace, and offer general protection.

On the other hand, the dark blue evil eye is believed to provide karma and fate protection, relaxation and calm, and smooth communication flow.

The evil eye myth is still alive in the modern world and interestingly it is getting stronger and stronger in celebrity culture. Celebrities like Charlie Sheen have been spotted with the evil eye talisman but it is hard to tell whether they believe in this superstition or not.

Whether you believe in the concept of the evil eye or not, there is no harm in wearing or having these items.