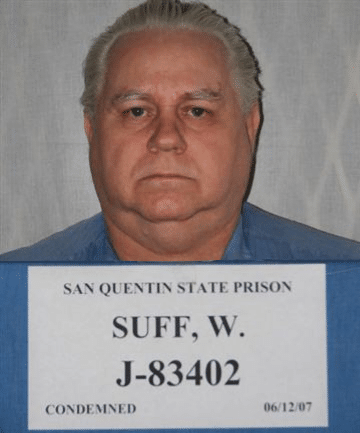 Californian serial killer William Lester Suff alias Riverside Prostitute Killer and the Lake Elsinore Killer was born on born August 20, 1950, in Torrance, California. He murdered 12 women in California and was sentenced to death in 1995. He is currently incarcerated at San Quentin.

Suff and Teryl, his wife then, were convicted in 1974, by a Texas jury for beating their 2-month-old daughter to death. Teryl got his sentence reversed by the Court of Criminal Appeals in Texas because evidence could put her neither as the primary actor nor as a principal in the murder of their baby. Suff got 70 years prison sentence but was paroled in 1984 and served only 10 years.

Between June 1989 and December 1991, William Suff raped, tortured, stabbed, strangled, and sometimes mutilated at least 12 women in Riverside County. He was arrested on January 9, 1992, after a routine traffic stop when a police officer found a bloody knife and objects believed to be related to the murders.

William Suff was described as a mild-mannered loner, and he worked as a county stock clerk who allegedly delivered supplies to the task force investigating his killing spree. He cooked chili during office picnics and enjoyed vanity plates and was an avid volunteer in the county’s car-pooling program. It was alleged that he used the breast of one of his victims in his chili, which won the “Riverside County Employee Chilli Cookoff” and also had plans to write a book about killer dogs.

William Suff was found guilty of killing 12 women and attempting to kill another by a Riverside County jury on July 19, 1995. He was believed to be responsible for as many as 22 deaths in total. Throughout his trial, the prosecutor presented evidence linking William Suff to the 1988 murder of a San Bernardino prostitute, as well as evidence that despite his prior Texas prison term for killing his first daughter while he was married he abused and violently shook his 3-month-old daughter by his second wife.

On August 17, 1995, the jury made their decision. It lasted only 10 minutes and William Suff was convicted of all 12 counts of murder and one count of attempted murder. On October 26, 1995, the trial court followed the jury’s verdict and ordered Suff to be condemned to death. William Suff resides on death row at San Quentin State Prison where his appeal was rejected in 2014 by the California Supreme Court which upheld his death sentence.