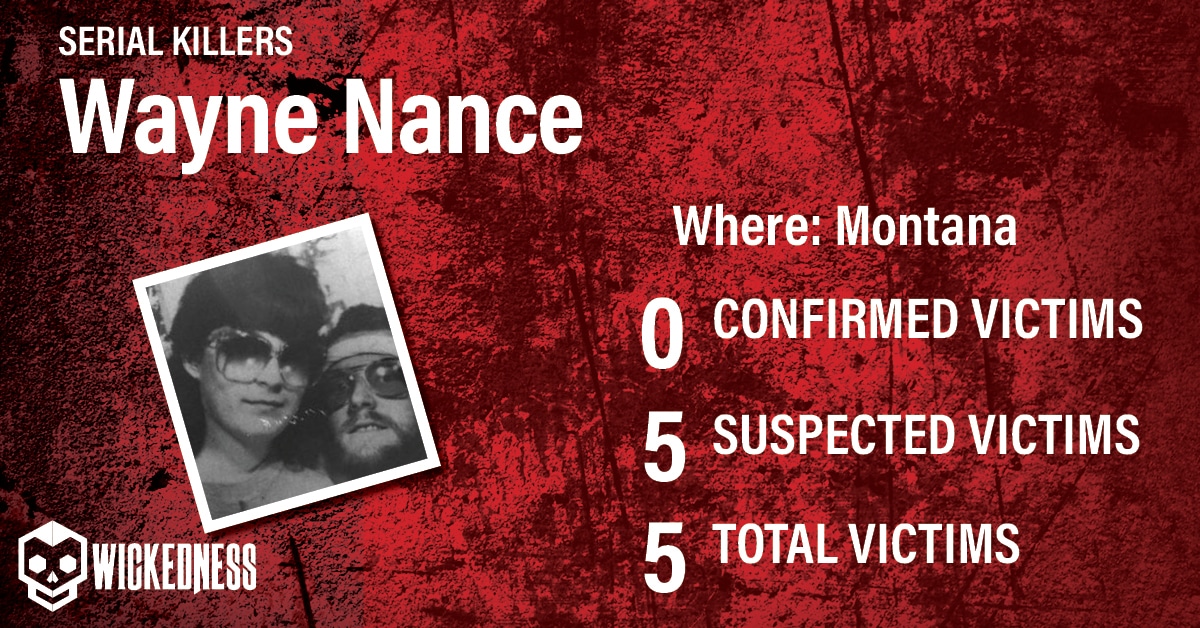 Wayne Nathan Nance (Wayne Nance) was born on October 18, 1955. He was American and is considered to be one of the few serial killers who were murdered by their last intended victims. Unfortunately, it would be too late for at least three people that saw their lives snuffed out by the homicidal Montana man. Nance was shot and killed during a home invasion of a co-worker’s residence; thus he was never officially charged, tried, or convicted of any murder charges.

In 1974, Wayne Nance was accused of the rape and murder of Donna Pounds. The middle-aged woman had been shot and was held captive in her basement tied to a chair. Wayne Nance was close with the victim’s son and he had been seen in the victim’s backyard around the time of Pounds’ death and was questioned by police but they could not find enough evidence linking him to the crime. Some years later, police discovered new evidence that linked him to the Pound’s murder after they searched Nance’s home.

In January 1980, the badly-decomposed body (which was not identified until 1985) of a teenage girl named Devonna Nelson was found on the side of a road outside of Missoula Montana. It is suspected that Wayne Nance killed Nelson during the supposed time frame in which she disappeared, but no legal charges have been brought against him due to a lack of evidence.

Marci Bachmann was sixteen when she ran away from her home in Vancouver due to conflict with family members. She soon met Wayne Nance who allegedly “took her in” after she was left by a trucker in the area where Wayne was. Evidence shows that he murdered her. Hair was found by investigators in his home and it matched the hair of her, who had gone missing shortly before all this. She appeared to have been buried beneath a shallow grave where her decomposing body was found by a biker on December 24th 1984. She was identified through DNA profiling in 2006.

On 9/9/85, authorities discovered the skeleton of a young woman in Missoula, Montana. She was shot twice in the back of the skull with a .32 calibre handgun. Lucas’ remains were initially believed to be those of an Asian woman but it was eventually determined through DNA technology to be that of Janet L. Lucas from Spokane, Washington who disappeared from Sandpoint, Idaho during the summer of 1983. With no leads as to who killed Janet Lucas, investigators are still looking for clues. Police say there’s only one suspect to this day – Nance.

Wayne Nance is also responsible for a double murder in Ravalli county on December 12, 1985, after tying up his victims, shooting both of them, and then attempting to destroy evidence by burning down their home with the couple’s four children inside which survived. Items stolen from their house were later found in Wayne’s residence at his own home.

Serial killer Wayne Nance’s endgame started when he invaded his co-worker Kris Welles and her husband Doug’s home in Missoula, Montana. He clubbed and stabbed Doug leaving him for dead in the basement of the couple’s home before forcing Kris upstairs to the bedroom to rape her. Despite Doug’s injuries though, he managed to grab a rifle loaded with a single shot and confront Nance in an upstairs hallway where they had another altercation. Nance was shot and incapacitated before having a chance to complete what would have likely been another grisly murder. They were rushed to a hospital, where Nance died the following day due to fatal injuries. Kris Welles and her husband Doug made full recoveries.