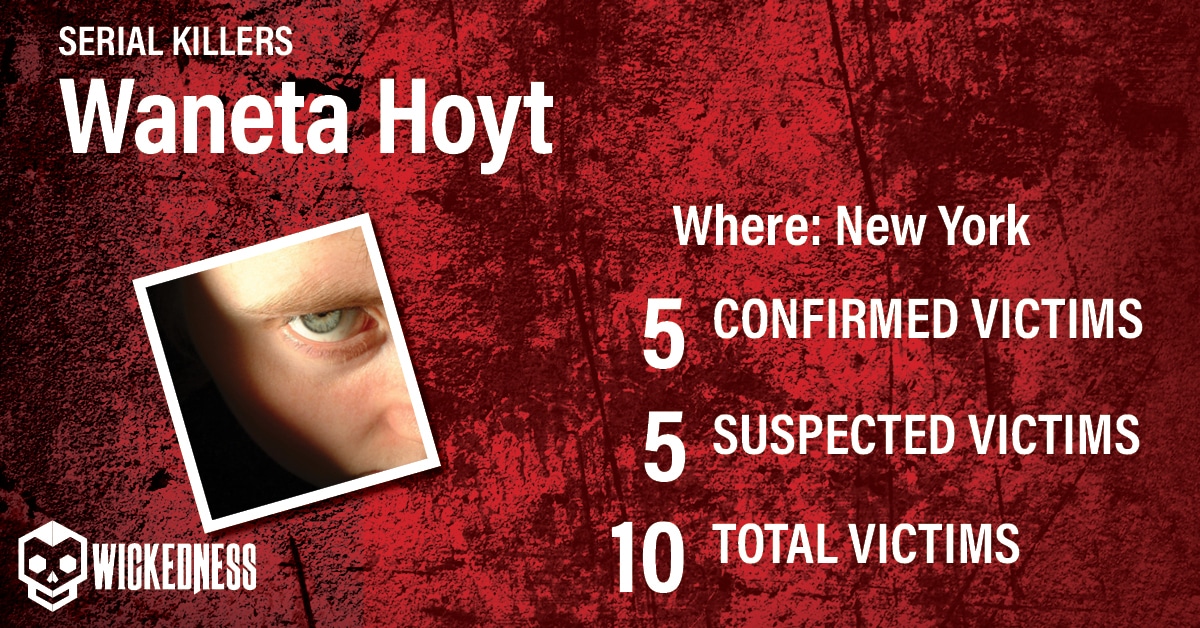 Waneta Ethel (Nixon) Hoyt, was born on May 13, 1946, in Richford, New York. He was an American serial killer convicted for suffocating all of her five children in Oswego, New York who she claimed had just stopped breathing.

Waneta Hoyt grew up in the countryside town of Richford, New York. She dropped out of Newark Valley High School in the 10th grade to marry Tim Hoyt on January 11, 1964.

Waneta Hoyt’s son Eric was incredibly short-lived. He was born on October 17, 1964, and died 101 days later on January 26, 1965. When her first three children — James (born May 31, 1966), Julie (born July 19, 1968), and Molly (born March 18, 1970) also died within the first 28 months of life. For over 20 years, sudden infant death syndrome (SIDS) was believed to be the cause of the deaths of the Hoyt babies. After the death of their last child, Mr. and Mrs. Hoyt adopted a baby boy named Jay and he remained healthy throughout childhood. murdered her own four children. Waneta Hoyt was arrested in 1994 when Jay was 17.

The last two biological Hoyt children, Molly and Noah, are no strangers to a bit of controversy being that they played the subjects in Dr. Steinschneider’s pediatric research who published an article in the 1972 Journal Pediatrics proposing a connection between sleep apnea and sudden infant death syndrome (SIDS). The article was controversial and its results were later discredited after further research failed to replicate the results.

In 1985, a prosecutor in a neighboring county who had been dealing with a murder case initially thought to involve SIDS was told by one of his experts, Dr. Linda Norton, a forensic pathologist from Dallas, TX that there may be a serial killer in his New York area. She suspected this after reviewing an expert account of the Hoyt case (in which they were not identified by name). When he became District Attorney in 1992, he tracked down the case and sent it to forensic pathologist Michael Baden asking him to review it. He concluded that the deaths of each baby were caused by murder.

In 1994, the murder case was transferred to the District Attorney of the county where the Hoyts resided because of jurisdictional issues. In March 1994, Hoyt was approached while at the Post Office by a New York State Trooper with whom she was acquainted. He asked her for help with research he was doing on SIDS, and she agreed. She then began being questioned by the officer as well as two other policemen who happened to be present. At the end of it all, she confessed to suffocating all five babies, and consequently, she was arrested. The reason that Waneta Hoyt gave for having committed these heinous crimes is that her children were crying, and this made it difficult for her to cope so she wanted to silence them.

Waneta Hoyt’s conviction was based on the confession she made to the police during interrogation. Experts hired to work on her defense determined that Waneta Hoyt suffered from dependent and avoidant personality disorders, making her particularly vulnerable when it came to being pressured by police. Even though a psychiatrist hired by the prosecution did believe that the police coerced Hoyt to get her to confess all on her own accord, Waneta Hoyt was convicted in April 1995 regardless.

On September 11, 1995, Waneta Hoyt was sentenced to 75 years in prison. She will be behind bars for 15 years apiece for each life she took. There has been much speculation about Hoyt’s diagnosis because she has been diagnosed with Münchausen syndrome by proxy. This diagnosis is not universally accepted in the psychiatric community.

Waneta Hoyt died in prison of pancreatic cancer in August 1998. The woman was formally exonerated by the state of New York because she died before her appeal became heard by a judge.