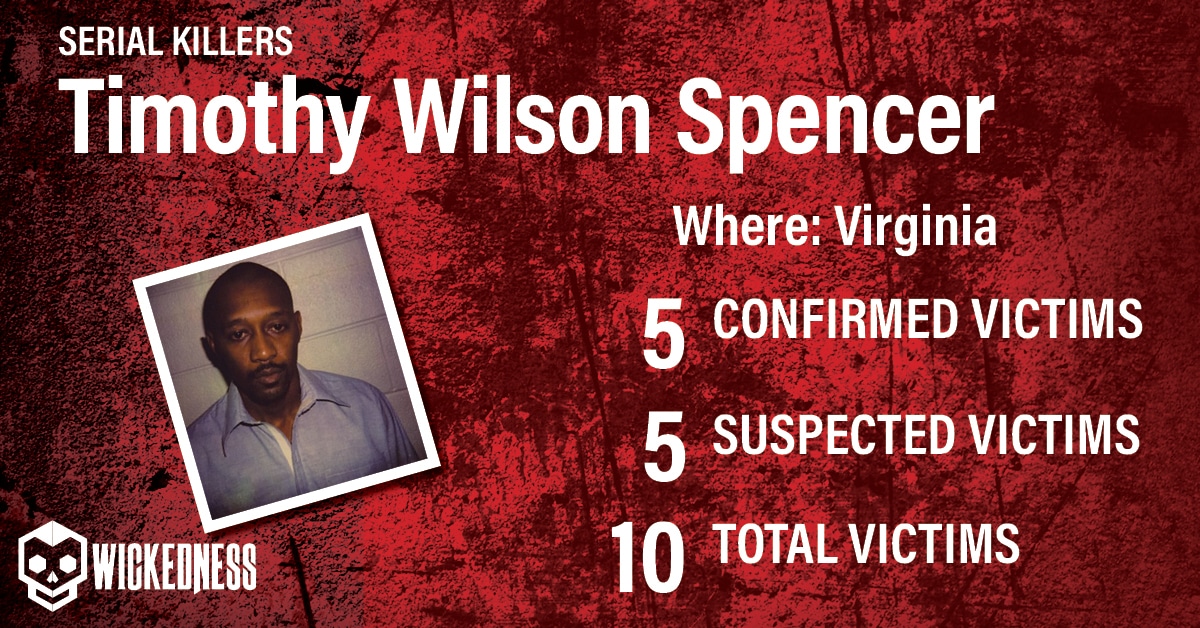 Serial killer Timothy Wilson Spencer, better known as the “Southside Strangler,” was an American murderer who committed four rape and murders in Virginia in the fall of 1987. In addition, he killed a woman in 1984, but another man was convicted in that case, David Vasquez was wrongfully convicted of the murder and served five years in prison before being released when DNA testing proved that another man, Timothy Wilson Spencer, had committed the crime. Spencer became the first criminal to be convicted based on DNA evidence in Virginia.

Timothy W. Spencer raped and strangled his first victim who was 35-year-old Debbie Dudley Davis. Spencer used a ligature and ratchet-type tool to murder in September 1987. A naked body of Davis was lying on her bed when it was discovered by authorities and the medical examiner determined that Debbie’s cause of death was ligature strangulation.

On the night of October 2, 1987, or the early morning of October 3, 1987, Dr. Susan Hellems was killed in her West 31st St. home and partially stripped in her bedroom wardrobe. She was raped, strangled, and gagged just like Davis. The killer had gained access to the house by cutting out a large portion of a second-story bedroom window screen. The cause of death was determined to be strangulation resulting from the two belts found wrapped around Susan’s neck.

On November 22, 1987, 15-year-old Diane Cho was found dead in her family’s apartment near Richmond. She had been raped and strangled in similar circumstances to those of the Davis and Hellams murders.

Susan Tucker, age 44 from Arlington, Virginia, was raped and murdered around November 27, 1987. She was found dead in her bedroom on December 1st and it was certain that this violent crime had been committed by a single perpetrator. He has since been recognized by the press as “The Southside Strangler”.

The hunt for the Southside Strangler took an unexpected turn with the murder of two women on January 16, 1988; Rena Chapouris and Michael St. Hilaire, whose body was found a few blocks where Chapouris’s body had been discovered. The deaths initially appeared to be the work of the Southside Strangler but neither woman was sexually assaulted like the previous victims and it was determined that both were murdered by different persons. It became evident that there had been multiple copycat killers who could have been responsible for Chapouris’s death. St.Hilaire’s death was ruled a suicide.

On January 20, 1988, Timothy Wilson Spencer was arrested and charged with the murder of his most recent victim, Susan Tucker. DNA evidence later associated him with the murders of Davis, Hellams, and Cho but in Diane Cho’s trial DNA evidence wasn’t used. In addition, DNA evidence connected him to the killing of Carol Hamm in 1984, in which another man had been wrongfully convicted in that case. David Vasquez was wrongfully convicted of the murder and served 5 years of a 35-year prison sentence in prison before becoming the first American to be exonerated based on DNA evidence.

Timothy Wilson Spencer was first convicted in July of 1988 under charges of having murdered Susan Tucker. He was sentenced to life imprisonment after DNA evidence proved his guilt, the first time in Virginia that someone had been convicted using DNA as evidence. In a series of trials in 1988 and 1989, Spencer was found guilty of raping and murdering Debbie Davis, Diane Cho, Susan Hellams and sentenced to death for each victim. His motions for appeal were denied when finally his conviction for the murders of Susan Tucker, Debbie Davis, and Susan Hellams was upheld in the state’s Court of Appeal. Timothy Wilson Spencer was executed in the electric chair on April 27, 1994.