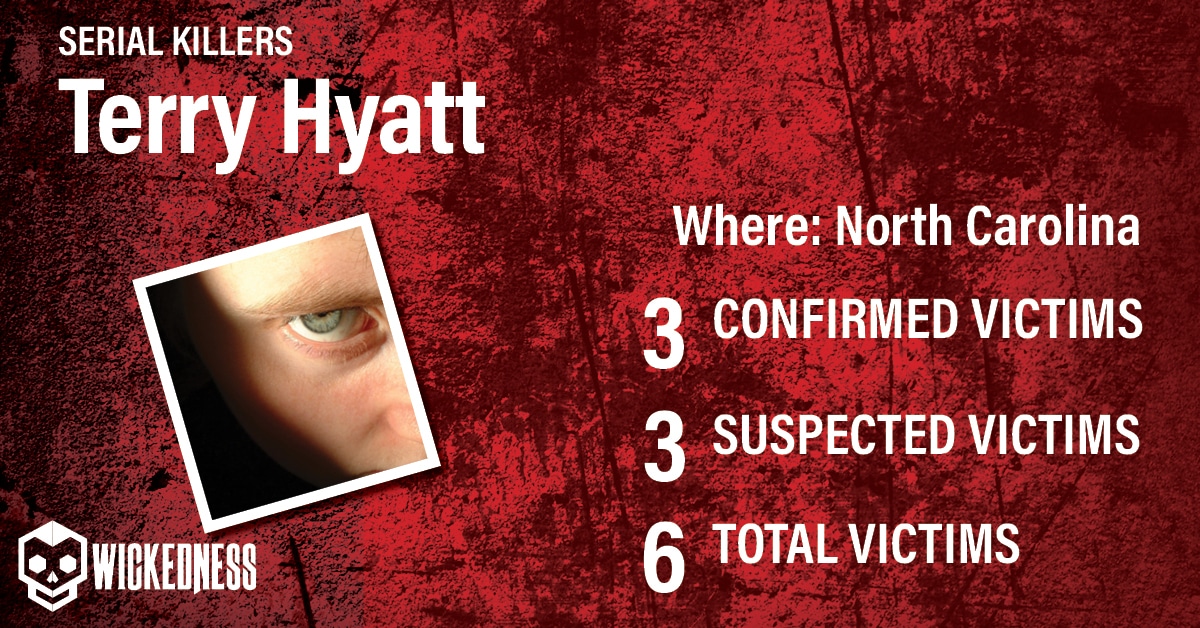 Terry Hyatt is a serial killer who was born on March 28, 1957, in North Carolina. He killed at least three women in the state from 1979 to 1987 and was convicted and sentenced to death for two of the murders. In 2005, he was linked to the third murder via DNA profiling and pled guilty to that murder charge, receiving a life sentence.

Terry Hyatt’s crimes have left a permanent mark on the lives of those he affected and on the community at large. His victims were innocent women who were taken from their families and friends in tragic and violent ways. The impact of his crimes is still felt today, though justice will eventually be served.

Terry Hyatt was born on March 28, 1957, in Asheville, North Carolina. He was the second of five children and spent his childhood in a typical family household.

However, Hyatt struggled academically and socially due to a learning disability. He often acted out emotionally but was still considered friendly and helpful by those who knew him. In addition to his academic struggles, Hyatt was also known as a small-time criminal who often stole items.

In 1975, he was given a 4-year prison sentence after being convicted of larceny.

As a result of the escape, he was given an additional 2 years to his sentence. He was eventually released in 1978 but quickly returned to a life of crime. In December of that year, he robbed a store owner at gunpoint which led to his arrest and conviction

Jerri Ann Jones was a 19-year-old cashier at a Harris Teeter store in Derita, North Carolina when she was reported missing on July 9, 1987. A day later, her body was found in a wooded area nearby, naked and with her throat slit.

Crime Stoppers offered a $1,000 reward for any information regarding her murder after hearing of her murder from Harris Teeter stores. Unknown assailants might have kidnapped her from a Graham Street parking lot. The case remains unsolved.

Betty sue Mcconnell, a 21-year-old single mother, vanished on August 25, 1979, while on her way to meet a friend at a local bowling alley. Betty’s mother and sister became concerned when she didn’t arrive home on time and alerted the police.

A search began immediately and betty sued McConnell’s car was found a short time later, gravely injured with multiple stab wounds. An ambulance was dispatched but Betty succumbed to her injuries on the way to the hospital.

Her car was later found five miles from where she had been discovered.

On October 19, 1979, while driving through Asheville, North Carolina, Hyatt spotted Carolyn Brigman walking home from her job at a Krispy Kreme.

He parked his truck next to her and brandished a knife, ordering her to enter. Hyatt stole $44 from Brigman and repeatedly threatened to slit her neck as they drove aimlessly around.

However, Brigman persuaded Hyatt that she didn’t like the police and wouldn’t call them, so he eventually freed her. To help the police apprehend Hyatt, Brigman went to the station and described her kidnapper and his truck.

A few months later, Hyatt was found guilty of armed robbery and kidnapping and was given a 25-year jail term in the central prison superior court.

Harriet Simmons, a 40-year-old mother of seven and night manager at a restaurant in Raleigh called “Johnny’s Supper Club”, disappeared on April 15, 1979, after leaving to visit her boyfriend in Nashville, Tennessee.

Her son-in-law Ronald Dement found her car at an I-40 rest stop near Statesville, with most of her belongings still inside, except for her car keys and purse. This led to an investigation into her disappearance.

In June 1980, the body of missing woman Barbara Simmons was found in a shallow grave near a rest stop where her car trouble had been found. The medical examiner determined that she had been strangled to death and her body showed signs of sexual assault. As of 2019, the case remains unsolved.

Authorities believe that she was likely abducted and killed by someone (Lester dean helms )she knew, as there was no evidence of a struggle at the scene and her body was found close to her car. The investigation is ongoing and authorities are hopeful that new leads will help solve this case.

Hyatt’s arrest was a shock to everyone who knew him. His friend, Jerry Harmon, had gone to the sheriff’s office and confessed that he had done something terrible.

This led to Hyatt being arrested and jailed without bond for the murders of Simmons and McConnell. Many people couldn’t believe that he was capable of such violence in the trial court.

Harmon recanted his story and claimed he had lied to get a reduced sentence, but prosecutors presented evidence that proved Hyatt’s guilt beyond a reasonable doubt. He was sentenced to life in prison without parole. In the years since his arrest, Hyatt has maintained his innocence but has never been able to provide any credible evidence to law enforcement officers to support his claim.

It was initially believed that Harmon had taken part in Betty sue McConnell’s murder alongside Hyatt, as he had confessed to doing so to get a reduced sentence.

However, prosecutors later found evidence that proved Hyatt’s guilt beyond a reasonable doubt, and he was sentenced to life in prison without parole.

In the years since his arrest, Hyatt has maintained his innocence but has never been able to provide any credible evidence to support his claim.

Many people were surprised by the arrest of Hyatt as his friend had gone to the buncombe county sheriff’s department and confessed to committing the crime.

Even though he later recanted his story, prosecutors had enough evidence to prove Hyatt’s guilt and he was given a life sentence without parole. Throughout the years Hyatt has maintained his innocence but has never had any credible evidence to back up his story.