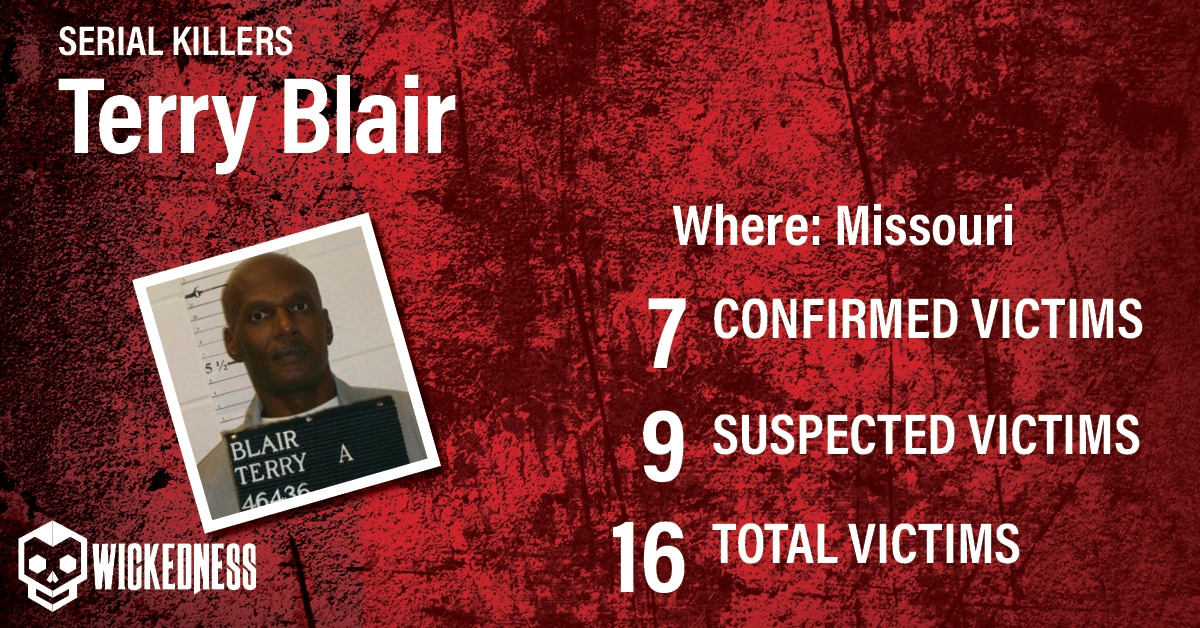 Terry Blair was an American serial killer and rapist with murderous roots, born on September 16th, 1961. He is responsible for murdering at least seven black women near Prospect Avenue in Kansas City, Missouri, but investigators think there probably are many more victims who will never be found.

The family tree of Terry Blair was filled with criminals. Terry Anthony Blair was the fourth eldest of ten siblings and was born into one of the most notorious criminal families. which would have many run-ins with the law. His mother only finished 9th grade and suffered from mental illness.

In a separate incident, Terry’s brother Walter Blair Jr met up with another man seeking to pay him $6K to kill Katherine Jo Allen so she could not testify at his rape trial. Walter confessed that he abducted Allen from her apartment, before taking her to a vacant lot where he shot her and buried her body. He was found guilty of the murder and was executed in 1993.

Terry Blair’s half-brother Clifford Miller was convicted of abduction of a woman from a bar in 1992. Clifford shot the woman in the arm and then drove her to an abandoned house, where he repeatedly raped her and beat her until she passed out.

William Blair, another member of the aforementioned family, committed numerous armed robberies, for which he received a 15-year sentence in 1991. However, after being released from prison, he continued to commit crimes and was arrested several more times.

The victim spent 2 months recovering in the hospital. after suffering a gunshot wound, fractured skull, broken jaw, and broken cheekbones. Her attacker received 2 life sentences plus 240 years for his crimes including kidnapping, armed criminal action, and forcible sodomy, with mother Janice Blair eventually being placed on probation after entering an Alford plea for fatally shooting her common-law husband, Elton E.

Terry’s nephew, Diamond Blair, was also convicted by Jackson County for kidnapping, robbery, and forcible sodomy while he was still a teenager. In 2013, he went on and committed a robbery during which he killed 22-year-old Montague Kevin Ashline. He is serving a 23-year prison sentence.

Terry’s sister, Warnetta Blair, also had a violent criminal past, with her last crime being the murder of drug dealer Pablo P. Gomez, for which she pleaded guilty to second-degree murder and received a 10-year sentence. Her son, Noila White IV killed his father and her husband, Noila White III.

Terry Blair, who had previously spent 21 years in prison for murdering Angela Monroe, the pregnant mother of two of his children, stood trial and was charged with six additional murders. Court records indicated that he had been angry with her for performing acts of prostitution. However, he was released from prison for two months in 1992 before heading back again after committing his second murder.

Terry Blair was convicted of murdering Angela Monroe, the pregnant mother of two of his children in 1982. The cause has been reported to be related to prostitution. He was paroled after serving 21 years.

38-year-old Sheila was strangled to death and her neck was broken. She may have died on or before September 2, 2004.

25-year-old Williams was also strangled and had a broken neck. Darci reportedly died on or before September 4, 2004.

40-year-old Carmen Hunt was reportedly strangled to death on or before September 4, 2004.

31-year-old Juniel was strangled to death on or before September 4, 2004, and had a broken neck.

How Was Terry Blair Caught

Terry Blair was finally caught after his DNA matched sperm on Sheliah McKinzie’s body. Initially, he denied any involvement with the murders, but the evidence and witness statements piled up against him.

Blair Terry was charged with eight counts of first-degree murder, one count of first-degree assault, and three counts of forcible rape on October 15, 2004. He waived his right to a jury trial thus avoiding the death penalty. For the murder of Angela Monroe, Blair was sentenced to 25 years in prison. After being paroled after 21 years, Blair was convicted of killing six more women and sentenced to life in prison with no possibility of parole.