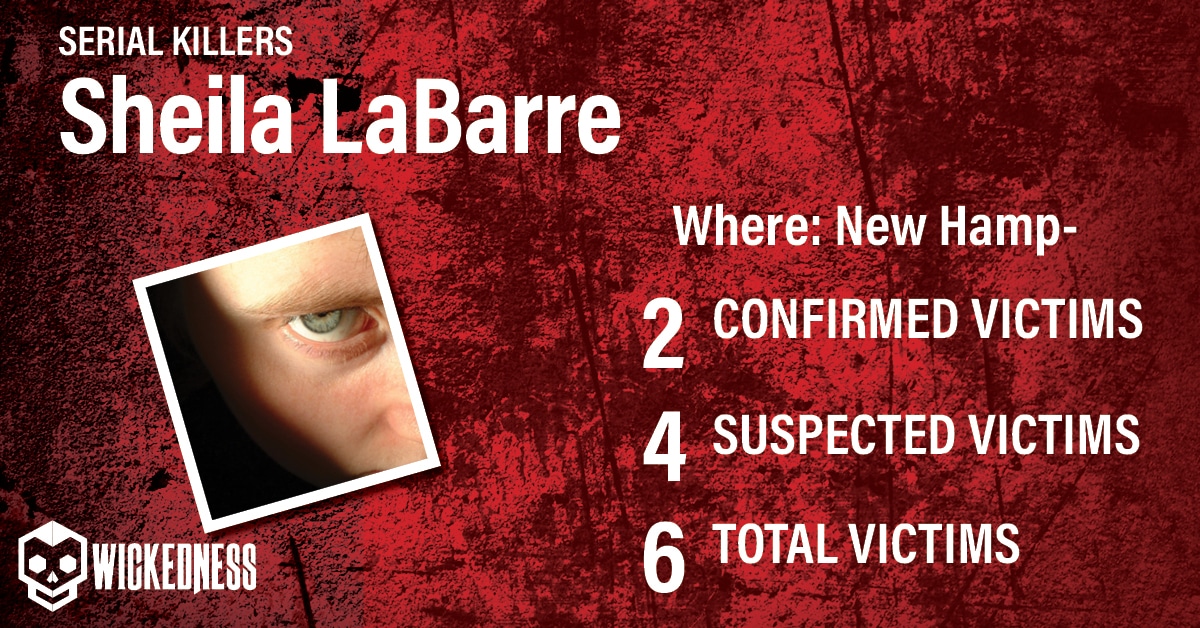 Sheila LaBarre was born Sheila Kaye Bailey on July 4, 1958, in Dover, New Hampshire. She’s an American serial killer who was convicted of torturing to death of two men she lured to her farm in Epping, New Hampshire. During her trial, she said she was an angel sent by God to torture pedophiles – and claimed that the two men she killed were child molesters.

Sheila LaBarre, born Sheila Bailey in Fort Payne, Alabama in 1958, graduated from Fort Payne High School in 1976. She married John Baxter in January of 1981 and moved to Epping, New Hampshire the same year after answering a personal ad placed by Wilfred “Bill” LaBarre. She never legally married Bill LaBarre but they lived together from 1987 until his death at age 74 in 2000. His first two marriages had failed many years before meeting Sheila and he had two daughters with his previous spouses.

After Bill’s Death, Sheila LaBarre inherited his estate. She said she was his common-law wife and that they had been together for decades. This upset Bill’s children from a previous relationship who filed to contest the will, but were informed they had a 50/50 chance of success and were required to pay $50,000 upfront. After LaBarre’s arrest, people suspected that she may have killed Bill because the two were allegedly involved in an affair for years before he passed away. Sheila has denied these claims though and has proclaimed her innocence.

Michel Deloge was Sheila LaBarre’s boyfriend and together they lived on her farm. He was last seen alive in 2005. After his death, Police confirmed that bones, a spent shell casing along with his birth certificate were found in her septic tank located on the property of her farm in 2008. The authorities failed to provide details regarding his exact cause of death. His mother told the police that she had worried Sheila LaBarre was trying to murder her son.

Kenny Countie was 24 when he met Sheila LaBarre. Countie had responded to a personal ad placed by LaBarre in the paper and soon after meeting, the two moved in together. It has been suggested that LaBarre took advantage of his low IQ and “child-like” trust, which made his mother Suzanne Countie worried about her son’s safety.

Sheila LaBarre made a secret recording of Kenny vomiting whilst she lectures him about abusing children. Sheila LaBarre stabbed him to death and burnt his body afterward. The police used his military records to identify his DNA.

The Epping Police Department was sued for negligence after Countie’s mother claimed that before his death, two police officers saw Countie bruised and burned, in a wheelchair at a Walmart store. The lawsuit was rejected by a jury in 2010.

After LaBarre was arrested, the police investigators searched her property and found the remains of three human toes that didn’t belong to Countie or Deloge.

Further investigation showed that many men came to LaBarre’s property, backed by hundreds of audio cassettes of Sheila talking to them. This made the investigators concerned if there were other victims too, but they could only prove her guilt in the murders of Deloge and Countie.

How Was LaBarre Caught

The police came to LaBarre’s home to check in on 24-year-old Kenneth Countie. They saw her burning a pile of trash, and when asked what is on the pile, Sheila told police to leave her property. The next day, they came with a search warrant.

When looking through the ashes of the burning pile from the day before, the police found bone fragments. The lab analysis showed the bones belonged to Ken Countie, and it was enough to issue the arrest warrant.

Authorities arrested Sheila LaBarre on charges of first-degree murder in connection with two missing men, Kenny Countie and Michael Deloge on April 2, 2006. They also searched her farm and recovered three human toe bones that did not match any reported victims after forensic analysis was done.

In court in May 2008, psychiatrists testified that LaBarre was diagnosed with schizoaffective disorder and delusional disorder. Brackett testified in court how he suffered from physical abuse for six years at the hands of LaBarre. Her ex-husband Wayne Ennis, claims that she once asked him to hurt Wilfred.

The daughter of Wilfred LaBarre stated that LaBarre threatened to shoot people and said she always disliked Sheila LaBarre and told her father as much for all of the aforementioned reasons.

The investigation and subsequent trial showed that Sheila preyed on vulnerable men, from the street or homeless shelters, or on men that have a trusting nature or mental health and developmental issues.

Sheila LaBarre had pleaded not guilty because of her mental illness when she was tried but the jury rejected her insanity defense. She was sentenced to two life sentences without parole in June 2008. She is serving her life in prison sentence at Homestead Correctional Institution, in Florida City, Florida.