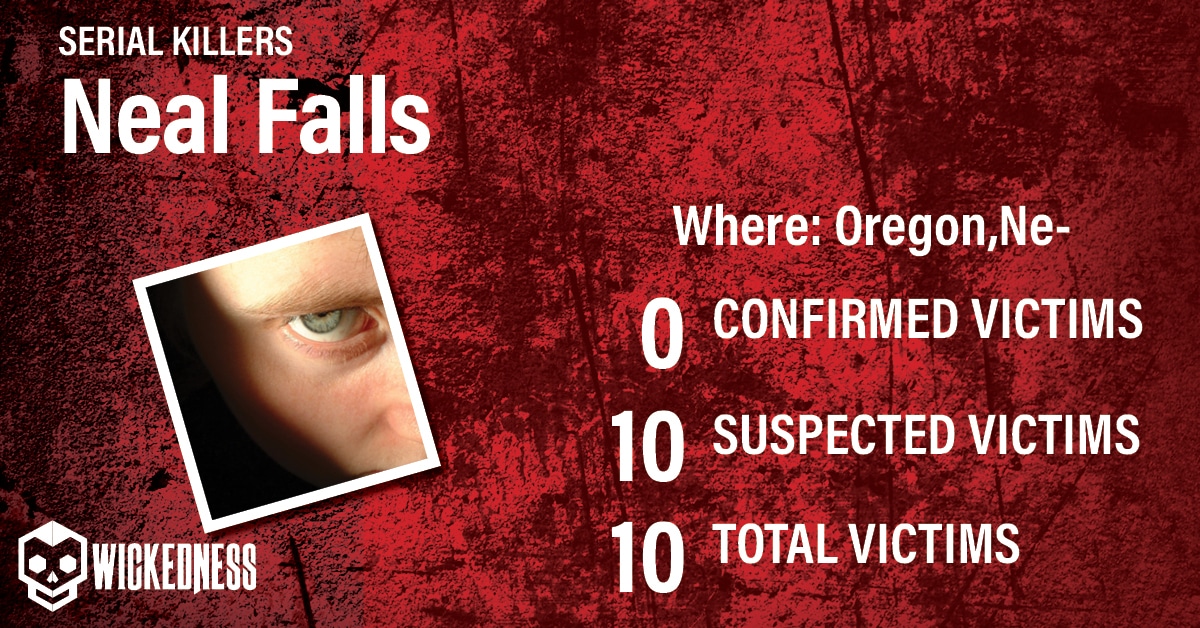 Serial Killer Neal Martin Falls was born on September 24th, 1969 in Eugene, Oregon. He was shot and died while in self-defense by Heather Saul, a sex worker in Charleston, West Virginia. Falls would be stopped by police over twenty times during his life but never received any serious criminal charges. Only after his death did police discover evidence possibly linking him to other crimes.

Neal Falls grew up in an impoverished family with nine siblings. He grew up in an environment lacking love, guidance, and emotional support from his father. Young Falls witnessed his parents arguing constantly, which negatively affected the overall well-being of the entire family.

As a child, Falls began showing signs of dromomania and during his school years, he developed an interest in firearms. He subsequently came to collect military paraphernalia, with which he became obsessed. His obsession culminated when he was charged with sexually harassing a colleague at work – it was around the same time that his co-workers began noticing changes to his personality. He was forced to quit based on these accusations and shortly thereafter began showing some signs of being unstable, such as frequently changing his place of residence from 2009 to 2015. He lived in Oregon, Indiana, Kentucky, and Texas before being detained by police for traffic violations on several occasions.

Shortly after moving to West Virginia, Falls had the misfortune of meeting a sex worker named Heather Saul online. He found her address and went to visit. Unfortunately, he chose to break-in. In the attack that followed, Saul struggled as Falls shoved his arm down her throat and strangled her around the neck. Struggling for breath during the struggle, she managed to grab her rake and break free. As she did so, he laid his gun on the couch in an attempt to justify his actions by getting it back. When he did so, she picked up the gun and shot him in the head where he died instantly on site.

Four sets of handcuffs were retrieved from Neal Falls’ body. When police officers went to inspect Neal Falls’ car, they found axes, bullets, a machete, and even bleach alongside shovels and sledgehammers. This was simply among the evidence which led them to question why this seemingly normal man would have so many things one wouldn’t expect to find in a vehicle; handcuffs, axes (sharp ones), bleach (an odd item for transporting in your vehicles isn’t it?), bulletproof vests, knives, and white socks!

Police believe Neal Falls, a suspected murderer of nine women, committed these crimes while following one, if not several patterns. They searched his home and found objects, weapons, and items that link with the women’s disappearances. Beyond going to Nevada, Falls previously lived in Henderson between 2003 and 2007 and it is there he became a suspect linked to four sex workers’ disappearances. Three of those bodies were later found dismembered in California, Illinois, and Nevada. The other three vanished from Chillicothe, Ohio: however, the fact remains that no evidence connected him to their disappearance. Despite this fact, it is still important to consider Falls as a possible suspect for these crimes.

A list containing the names of six sex workers and their contacts on social networks was found in Neal Falls’ pocket – a heartbreaking discovery according to the prosecutor’s office who claimed that it might have been intended, victims. Fortunately, it turns out that all of them are alive and well; five of them were located across West Virginia and the sixth worked in San Diego.