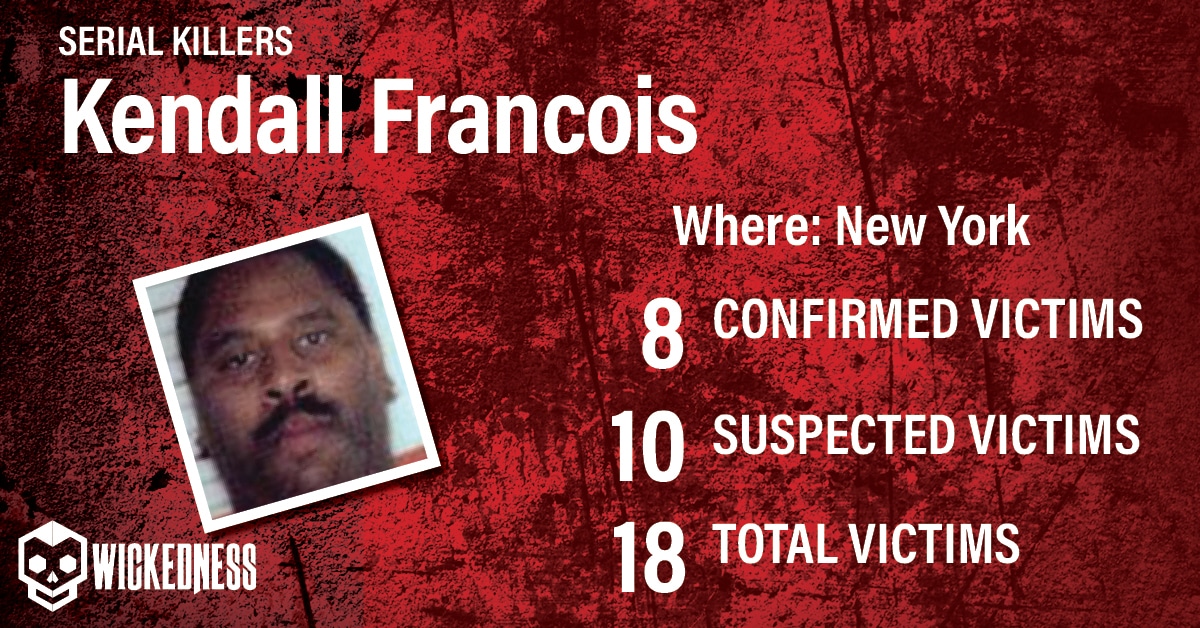 Kendall Francois (The Poughkeepsie Killer) was born on July 26, 1971 and is a convicted serial killer who murdered at least eight prostitutes between 1996 and 1998. He was born in Poughkeepsie, New York. Shortly before his death, he was sent to the Wende Correctional Facility, thanks to his crimes. It had been revealed that he tested positive for HIV as early as 1995 but it is not said if this caused his death.

On October 29, 1996, 30-year-old Wendy Meyers disappeared and was reported missing to the Town of Lloyd Police Department in Ulster County, New York. She was last seen at The Valley Rest Motel in Highland, a small town situated near the banks of the Hudson River south of Kingston.

On December 11, 1996, Patricia Barone reported her daughter Gina missing to the Town of Lloyd Police Department. Gina was 29 years old and had been last seen on November 14th in Poughkeepsie on a street corner having a dispute with an unidentified man.

In January of 1996, 47-year old Kathleen Hurley disappeared after being spotted walking along Main Street in the downtown area of Poughkeepsie. The same month, police placed Francois’ home at 99 Fulton Avenue under surveillance following an extensive investigation into the missing person’s case. Prostitutes reported that he was a rough lover and in March 1997.

Reports filed by Catherine Marsh’s mother led to the discovery that she too had gone missing sometime prior; she was last observed November 11th, 1996 also in Poughkeepsie. Four months had passed since her disappearance.

Poughkeepsie Police contacted the F.B.I. for help a month later to help them establish a profile of a suspect but their investigation was limited as they needed a crime scene.

In November 1997, Mary Healey Giaccone was reported missing. The police acted immediately upon being informed of the disappearance by Mr. Giaccone himself, because he wanted to tell her of her mother’s death as soon as possible before she heard it from someone else. Police soon discovered that she was last seen alive on February 9th in the same Poughkeepsie area as some of the other victims.

A few months later on June 13th 1998, Sandra Jean French a 51-year-old mother of three disappeared and her car was discovered by her daughters near Kendall Francois’ home.

In August 1998, another woman, Catina Newmaster disappeared. At that time, the connections between her circumstances and those of the other missing women was similar: she had frequented downtown Poughkeepsie streets and many people said she looked like many of the vanished women.

It was on September 1, 1998 Kendall Francois abducted a prostitute in his own home on 99 Fulton Avenue, when she freed herself and fled. Consequently, she filed a complaint against her abuser. Kendall Francois was taken to police headquarters for questioning.

Trial and Sentence of the The Poughkeepsie Killer

Kendall Francois made many confessions regarding the disappearance and possible demise of so many women. The detective team searched through the home and eventually found many more dead bodies in Kendall’s home.

Kendall Francois was charged with eight counts of first-degree murder, eight counts of second-degree murder, and attempted assault as a result of the Dutchess County murders in 1998. It was later discovered that he contracted HIV from one of his victims – this knowledge was gained from an autopsy. His defense team took the case to the State Court of Appeals but it eventually came back to haunt him. The plea was finalized on August 11, 2000 and Kendall Francois was sentenced to life without parole in Attica Correctional Facility.