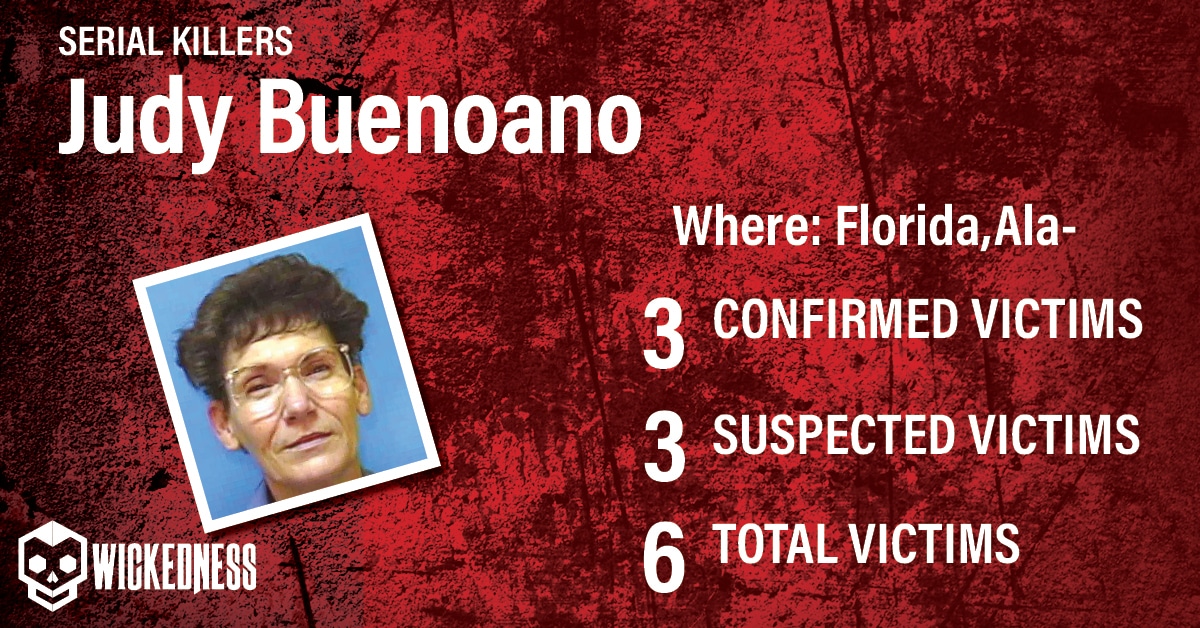 Judy Buenoano (born 4 April 1943) was a serial killer who became the first woman to be executed in Florida since 1848, and the third to be executed in the USA since 1976 for the murder of her husband James Goodyear in 1971 and the murder of her boyfriend Bobby Joe Morris in 1978. She killed also her son Michael Buenoano and tried to kill John Gentry who was also her boyfriend but he survived.

Judy Buenoano was the third of four siblings. Her mother died when she was four, and she and her baby brother Robert went to live with their grandparents. After her father remarried, they moved to New Mexico to live with him. As a child, she reportedly was abused both physically and emotionally at the hands of her father and stepmom who reportedly starved her and forced her to work as a slave. At fourteen, Buenoano had two months in prison for attacking her father, stepmother, and two stepbrothers. Upon being released from Gila Bend State Reformatory, Buenoano chose to attend Palo Alto High School where she graduated in 1960. A year later she gave birth to Michael, an illegitimate son.

In 1971, Judy Buenoano was married to James Goodyear, an air force sergeant. Allegedly, she poisoned him with large doses of arsenic to collect on the life insurance policy. He died that year and for several years, his death was considered natural.

In 1973, Judy Buenoano moved in with Bobby Joe Morris. In 1978 he succumbed to arsenic poisoning. At the time it looked like he’d just had bad luck with his meals, but it was later discovered that Judy Buenoano had intentionally poisoned him. She legally changed her name to “Buenoano” (corrupted Spanish for “good year,” from “buen año”).

On a morning trip in 1979, Judy Buenoano’s son, Michael Goodyear became severely ill. The subsequent autopsy revealed he had been the victim of arsenic poisoning and was suffering from paraplegia. In 1980, Michael Goodyear, the son of Judy Buenoano and a paraplegic from poisoning was killed when his mother took him out canoeing and he went overboard, weighed down by arm and leg braces.

In 1983, Buenoano was engaged to John Gentry. John Gentry was severely injured when his car exploded. While he was recovering from his injuries, a police investigation revealed that in November 1982, Buenoano had begun telling her friends that his fiancée (John) was suffering from a terminal illness. John gave the “vitamin pills” that she had been giving him to the police; these were found to contain arsenic and formaldehyde.

This led to the exhumations of Michael Goodyear, James Goodyear, and Bobby Joe Morris, and to the discovery that each man had been the victim of arsenic poisoning.

In 1984 Buenoano was sentenced to life in prison for the murder of both of her husbands, Michael and James Goodyear. She was also charged with attempted murder for her attempted poisoning of John Gentry (though she attempted to poison him a second time after being placed on trial for his attempted murder back in 1985). That same year, she was given a twelve-year sentence for the attempted murder case that led to Gentry’s hospitalization.