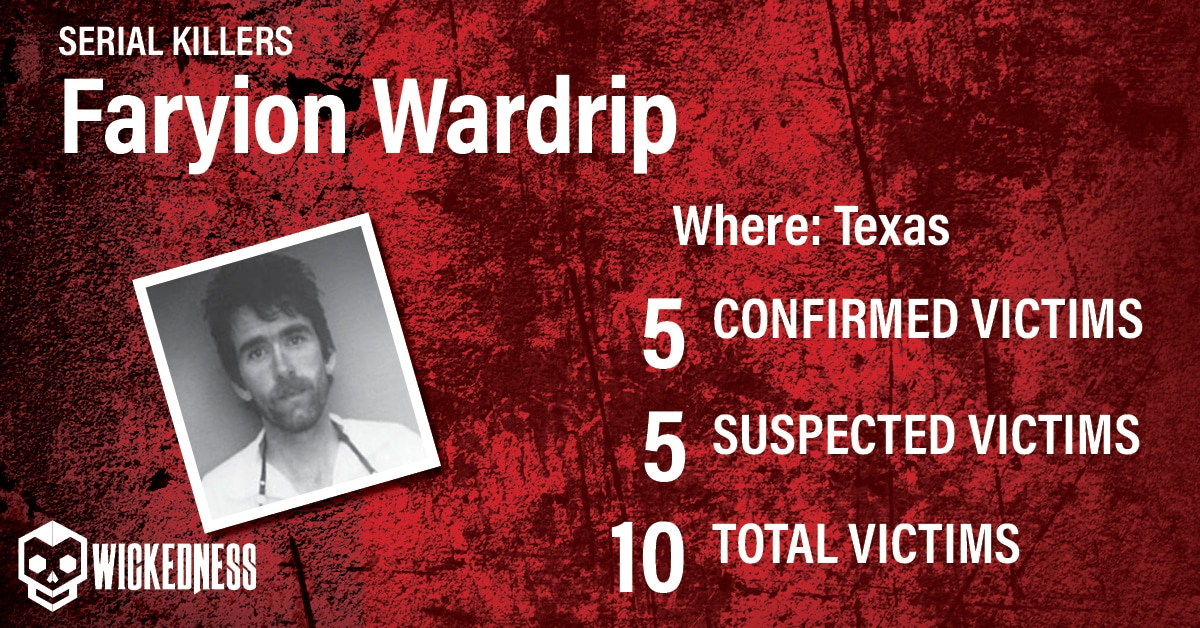 Faryion Wardrip born March 6, 1959, was an American murderer who raped and killed a total of five women between the years of 1984 and 1986. Four out of the five women victimized were murdered in Wichita Falls, Texas, and its surrounding areas, one woman was murdered in Fort Worth. All of his female victims were white, between the ages of 20-25 years old.

Faryion Wardrip, otherwise known as The Wichita Falls Body Snatcher was born in Salem, Indiana. He was the oldest and has one brother. He dropped out of high school in the twelfth grade and later joined the United States National Guard in 1978. Having served for six years, he was released from the National Guard after drug-related issues such as smoking marijuana, and multiple instances of going AWOL (Absent Without Leave). He was never deployed into combat duty during his military service.

In March 1983, Faryion Wardrip married Johnna D. Jackson, but his drug abuse dogged the marriage and they divorced in 1986. Wardrip had two children from the marriage.

Wardrip committed burglary and murder on December 21, 1984. He broke into a household at night, when he was screaming at the stars and walking around in a residential area of Wichita Falls. The scuffle alerted Terry Sims a Midwestern State University education major and health care worker, who came outside to see what the commotion was about. Wardrip charged at Terry and she closed the door on him but he kicked it open. Once inside, the suspect bound the Sim’s hands with an electrical cord and assaulted her. He later confessed to killing the victim for no apparent motive (other than rage).

Police officers found a semen sample and fingerprint on Sims’ shoe and they were preserved for future analysis. Over one decade later, the official records indicate that the print matched Wardrip’s DNA.

On January 19, 1985, 23-year-old nurse Toni Jean Gibbs disappeared while working at Wichita General Hospital in Wichita Falls, Texas. She had offered Wardrip a ride because they had previously worked together and they knew each other. He got into Gibbs’ car but then proceeded to attack her verbally and physically, becoming violent towards her. He forced her to drive down an isolated dirt road. Two days after her abduction, Gibbs’ car was found approximately one mile from the hospital. Later on February 13th, utility workers found Gibbs’ naked body at the southwest corner of West Jentsch Road and Highway 281 in Archer County – she had been sexually violated and stabbed numerous times.

On March 24, 1985, Wardrip met 25-year-old Debra Sue Taylor at a bar. He approached her and asked her to dance, which she agreed to do. The two spent some time together in the club before going outside where he offered to drive her home, which she also agreed to. As soon as they left the club, Wardrip attempted to make sexual advances towards Taylor (which were rejected) and became infuriated. Just a few minutes later he killed Taylor by stabbing her in the back and dragging her body around a parking lot across the street from the club where she was found dead on March 29th by construction workers who had been working nearby.

The third victim that Wardrip killed was Ellen Blau a 21-year old Midwestern State University student whose badly decomposed body was found in a field north of Wichita Falls, Texas on October 10 by a county road crew employee. She may have been sexually assaulted, as her underwear had been pulled down, but the condition of her remains prevented accurate analysis. There was no semen on the site.

On May 6, 1986, Wardrip murdered Tina Elizabeth Kimbrew. The 21-year-old was a waitress he had befriended recently. He went to her apartment and suffocated her with a pillow because she reminded him of his ex-wife.

In 1999, Faryion Wardrip was sentenced to death for the murder of Sims, and three life terms for three other killings. Years later, in 2008, a federal magistrate recommended that the death penalty be overturned because he received an ineffective defense in his trial. In December 2014, it was determined that an appeal made by Wardrip regarding inadequate representation would not be considered by the Texas Court of Criminal Appeals.

Wardrip remains on death row at Polunsky Unit near Livingston as of 2019.