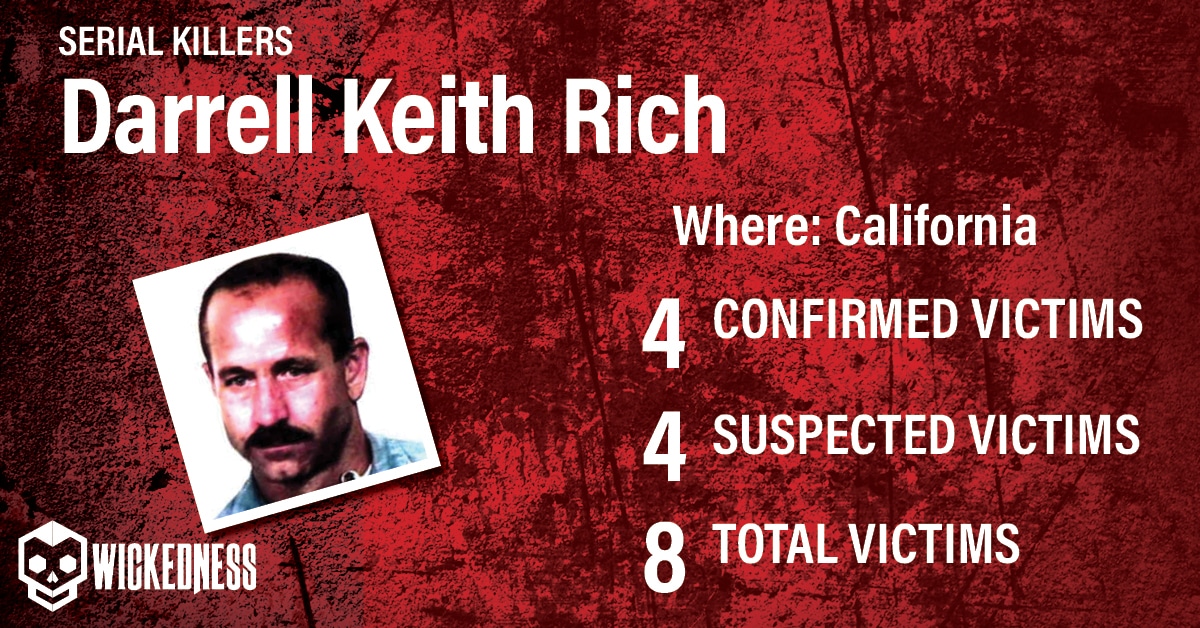 Darrell Keith Rich was born in February 14, 1955. He was also known as “The Hilltop Rapist,” and was a Native American serial killer who committed the murder of four women and a child in Redding, California between June and August 1978. He was executed, by lethal injection, at San Quentin State Prison on March 15, 2000.

As an adolescent, Darrell Keith Rich showed signs of potentially being violent and was known to be impulsive. He resented his mother deeply, as she frequently took care of other people’s children – something which affected Daryl’s self-esteem and pushed him to drop out of school. He later moved back in with his father and although he received poor grades in school, he did work hard which caught the eye of pro-basketball scouts.

At the age of seventeen, Darrell Keith Rich shot himself in the chest while hunting in an attempt to commit suicide after fighting with his girlfriend. In a separate incident, Rich also shot at a police car trying to provoke suicide by cop. Later on down the road, Rich got into trouble with the law, as it is revealed that he was serving time for DUI and had committed several acts of road rage. We even hear that he once attacked somebody with a tire iron during an act of road rage.

Darrell Keith Rich abducted a 25-year-old woman and tried to force oral sex on her on June 13, 1978. Finding that she did not want to engage in this act, he repeatedly struck her over the head with an object and fractured her skull. He left her for dead, but she was found alive twelve hours later. On June 19, he abducted a 21-year-old woman. She was forced into his car and taken to an isolated area where he forcibly raped her. The woman managed to make him let her go after lying to him about having an infant child of some months old; a claim which Rich seemed to believe as he decided not to kill the young lady at that time. He proceeded on June 25, 1978, however, by abducting yet another young woman (age 14) and raping her repeatedly before letting her go several hours later.

On July 4, Darrell Keith Rich, attacked two women. The first was an unnamed woman whom he raped then he let go and another who was 19-year-old Anette Fay Edwards. He abducted, raped, killed her by smashing her skull in with a blunt object. Her body was later discovered down an embankment approximately two miles from where she lived. An autopsy report revealed that the cause of death was skull fractures inflicted by a blunt force that occurred during or before the time of death.

Two weeks later, Darrell Keith Rich abducted his first victim while she was riding her bicycle. Darrell Rich raped the 15-year-old girl in Redding and then let her go. His second murder was carried out on August 2, when he abducted 17-year-old Patricia Ann Moore. He raped her, then killed her by head wounds caused by blunt force trauma. Her body was found two weeks later at a dump. The cause of death determined as severe injuries to his head as well as broken teeth as a result of blunt force trauma.

Darrell Keith Rich’s third murder victim was the 26 year old Linda Diane Slovik. Rich abducted Slovik after a night at a bar, taking her to the same dump where he had left Moore’s body. Having shown his victim the body of Moore, he raped Slavik and methodically shot her with a .22 caliber pistol into the mouth which had severed her spinal cord and caused instant death. Her nude body was found at the same dump, approximately 20 feet from Moore’s body. She had been shot twice with one bullet hitting her in the neck and the second hitting her in the mouth, which had severed her spinal column causing instant death.

Darrell Keith Rich kidnapped and murdered eleven-year old Annette Lynn Selix in Red Bluff, California in 1981. Selix’s family was known to Rich, who abducted her after she walked home from a market on August 13th. He then raped Selix and drove to Burney Bridge where he threw her off alive. Unbeknownst to her at the time, she would land in the water underneath and ultimately succumb to the injuries sustained from the impact. An autopsy later revealed that she had been alive when he threw her off.

Darrell Keith Rich was convicted of three counts of first-degree murder and one count of second-degree murder. He was found guilty and sentenced to death for two of the four murders on January 23, 1981. On March 15, 2000 at 12:05 a.m., Rich was executed, via lethal injection in the execution chamber at San Quentin State Prison.