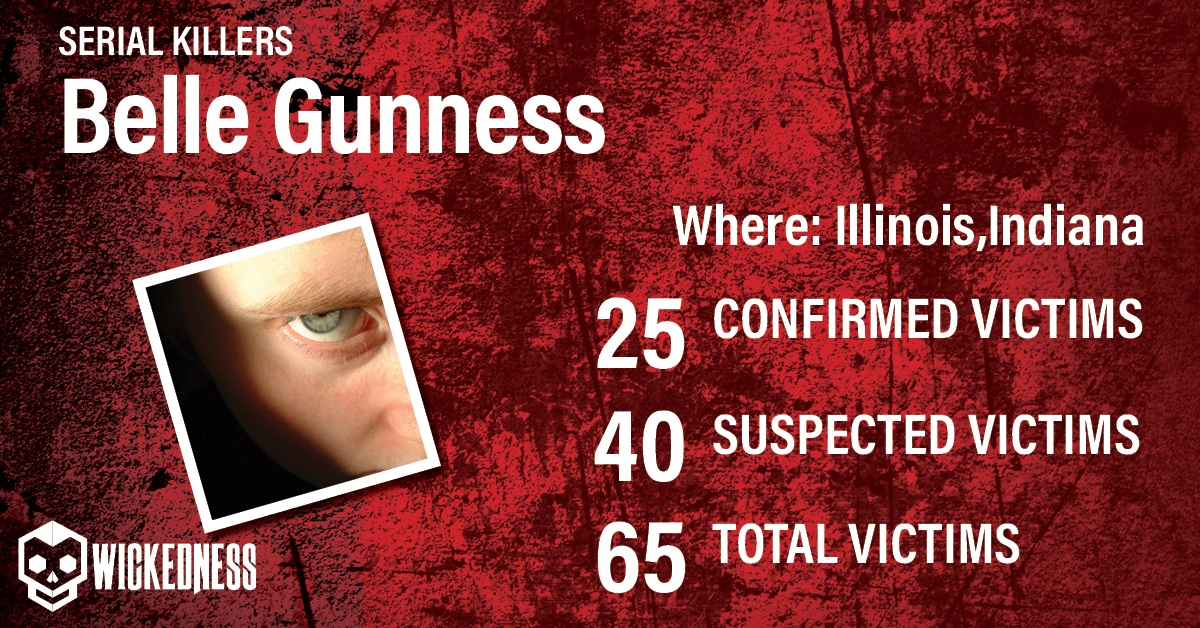 Born on November 11, 1859, Belle Gunness, often known as “Hell’s Belle,” was a Norwegian-American serial murderer who operated in Illinois and Indiana between 1884 and 1908.

Gunness emigrated to the United States in February 1901 together with her two children, Myrtle and Lucy. She made her home in Chicago and started working as a maid. Her next location was La Porte, Indiana.

When Gunness poisoned her neighbor John Moe, she started her murderous rampage. Then, after luring Ray Lamphere, a previous boyfriend, to her home, she used a hatchet to murder him.

Gunness killed between 25 and 40 individuals over the following six years, most of them were men who she had attracted to her farm with the prospect of marriage. For their life insurance, she would kill them.

In 1908, Gunness’ farmhouse caught on fire. The bodies of her three children were found in the ruins, but Gunness’ body was never found. It is presumed that she faked her death and fled with the insurance money. To this day, the identity of Belle Gunness remains a mystery.

On November 11, 1859, Belle Gunness was born in Selbu, Norway. She was confirmed in the Evangelical Lutheran Church in 1874 and was the eighth child.

She started working on nearby farms when she was 14 years old to earn money for her 1881 trip to New York. Before being married for the first time in 1884, Belle resided in Chicago with her sister and brother-in-law and worked as a domestic helper and at a butcher shop. Belle had a manly look and was tall and physically powerful.

In 1884, Belle Gunness wed Mads Sorenson. The couple’s sweets shop was destroyed in the fire. The couple had received insurance compensation in both cases since their home had also burnt down.

Belle received a sizable insurance cheque after each of the two babies in their household who passed away from large intestinal inflammation were covered. Since Belle never seemed to be pregnant, the neighbors spread rumors about the infants. Two life insurance policies had been bought by Mads Sorenson.

Because one policy would expire and the other would start on July 30, 1900, both were in effect at the same time. That day, a brain hemorrhage claimed Sorenson’s life. Gunness said that he had a headache and gave him quinine powder to treat it.

He had been home with a headache and Gunness provided him with quinine powder to relieve the pain; later, she found him dead.

Gunness collected money from both the expiring life insurance policy and the one that went into effect that day, making a total of $5,000. With the insurance money, she moved to La Porte, Indiana, and bought a pig farm.

Between 1884 and 1908, the Norwegian-American serial murderer Belle Gunness operated in Illinois and Indiana. Over 40 individuals are thought to have been murdered by her, the majority of them were males who answered her advertisement looking for a partner.

About the fire at Gunness’ home, Ray Lamphere, belle-fired ray Lamphere the hired help and sometimes romantic partner of Gunness was found guilty of arson. Later, Lamphere admitted that Gunness had requested him to set the farmhouse on fire while her children were still inside, and that the body that was initially believed to be Gunness’ was that of a murder victim.

Gunness was prompted by these incidents to set fire to her home, stage a suicide, and leave. Lamphere was wearing Henry Gurholt’s watch and John Moe’s jacket when he was taken into custody.

Peter’s skull was broken when a meat grinder collapsed on him as he sought something on a high shelf, according to Belle. Despite suspicions of murder, the district coroner assembled a coroner’s jury, but nothing came of the case. Belle received $3000 from the insurance company for Peter’s passing.

Beginning in 1905, Belle Gunness wrote matrimonial advertisements in Chicago newspapers. Wisconsin farmhand Henry Gurholt responded to one of these advertisements. After visiting La Porte, Gurholt wrote to his family to let them know how much he enjoyed the farm and how well he was doing.

He asked for some seed potatoes to be sent to him. After this, the family became worried when they didn’t hear back from Gurholt, and they got in touch with Gunness. She informed them that Gurholt had traveled to Chicago with horse merchants.

She did, however, retain his trunk and fur cloak. In 1906, Minnesotan John Moe responded to one more of Gunness’ advertisements. A check was withdrawn by Moe after months of correspondence.

After corresponding with each other for several months, Moe traveled to La Porte and withdrew a large amount of cash. However, no one ever saw Moe again. A carpenter who did work for Gunness house occasionally observed that Moe’s trunk, along with more than a dozen others, remained in her house.

Between 1884 and 1908, the Norwegian-American serial murderer Belle Gunness claimed operated in Illinois and Indiana. Due to her misdeeds, she earned the moniker “Hell’s Belle”.

Despite being pronounced dead, tales of women thought to be Belle Gunness stew spread around the nation. In recognition of the crime, the La Porte County Historical Society Museum currently features a permanent “Belle Gunness” display.

It was not possible to conduct an accurate DNA test on the corpse. Witnesses who traveled from all over the nation to view the mass graves made the Gunness farm a popular tourist destination. On-site vendors offered refreshments and mementos. The property itself was bought and sold several times. The land is currently occupied by private residences.

In popular culture, Belle Gunness has been the subject of numerous books, articles, films, and television shows. In 2008, a play called Belle Gunness: A Folktale was staged in Chicago.

The playwright, Erik Ehn, used the story as a way to comment on the War on Terror. In 2012, a book called Belle Gunness: The Lady Bluebeard was published. It is a historical fiction novel that tells the story of Belle Gunness from the perspective of her daughter, Jennie. Belle Gunness is one of America’s most notorious serial killers.