One of the most disturbing and terrifying things about scary movies, whether they’re slasher, thriller, or horror, is when they’re based on true crime stories. There are many record-breaking serial killer films in cinematic history like American Psycho and The Silence of the Lambs that are worth watching. While these movies about serial killers are fiction, many are based on true stories. See here for their documentary counterparts and a list of documentaries about female serial killers.

These true crime films give even the most obsessed fans the thought that there isn’t always a big screen that separates them from evil. The following are some of the best serial killer movies that are worth watching if you like crime, drama, and horror genres.

Note: The following content contains descriptions of violence, and it’s not for the faint-hearted people.

1. The Silence of the Lambs 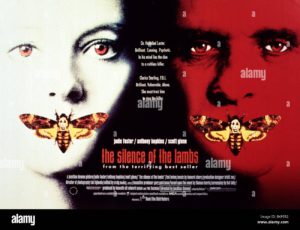 The Silence of the Lambs is arguably the best serial killer movie, starring Anthony Hopkins (as Hannibal Lecter), Ted Levine (as Jame Gumb AKA Buffalo Bill), and Jodie Foster (as Clarice Starling). It’s truly a one-of-a-kind film, which is inspired by a true story.

The serial killer in the Silence of the Lambs is referred to as Buffalo Bill. He’s a sick-minded murderer which a fetish to kidnap women and keep them in a chamber filled with human flesh before killing them and skinning them to make a bodysuit.

These heinous actions are related to Ed Gein who in real life used to sit on chairs made of human bones and drink from dishes made of skulls. A fun fact about the Silence of the Lambs is that Anthony Hopkins appeared as a flesh-loving monster in this movie just for 16 minutes of screen time and won an Oscar award. 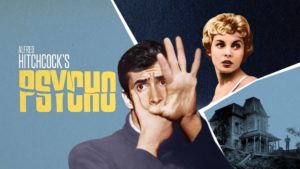 If you don’t already know, the Norman Bates story is also known as the mother of all serial killers. The movie psycho is based on a novel of the same name and it features a troubled hotel operator and murderer played by Anthony Perkins.

The story of this movie is also based on the real serial killer Ed Gein. In every regard, it was a pioneering work in the horror genre, and the second film, by many accounts, introduced the slasher genre. Norman Bates and El Gein have many common attributes, such as wearing bodysuits made from dead woman’s skin. 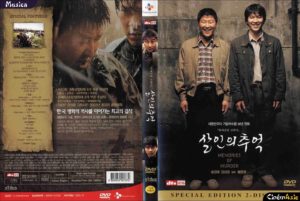 It’s loosely based on South Korea’s very first real serial killers and takes the audience back to the 1986 military dictatorship. The very first scene of the movie shows that two women have been raped and murdered in a small town.

A detective, Seo Tae-Yoon, from Seoul, volunteers to help the police officers of that small town o solve the case of murders. But he then realizes the incompetence, brutality, and corruption of the police department. The movie also depicts the dark effect of ableism and social inequality. 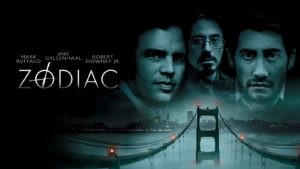 David Fincher makes surreal films, and the Zodiac is undoubtedly impeccable. It’s inspired by a book that features a popular zodiac killer. The unique thing about this movie is that the case remains unsolved.

The cast of Zodiac is also massive as you’ll see Robert Downey Jr, Jake Gyllenhaal, and Mark Ruffalo in action together. It’s a little longer than most serial killer films, but you’ll enjoy every second as it becomes more and more interesting with each scene. 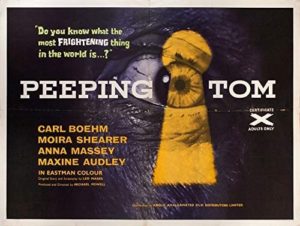 Peeping Tom is known to be the very first official slasher title, and it was also the very first film ever that explains the point of view of the murderer in detail to the audience. Karlheinz Böhm played the role of a shy loner Mark Lewis, who follows and spies on women in London and start to murder them.

Disturbingly, the killer uses video cameras to capture these women before killing them to record the fear on their faces. Even by today’s standards, Peeping Tom is one of the most terrifying yet innovative movies that you can watch. 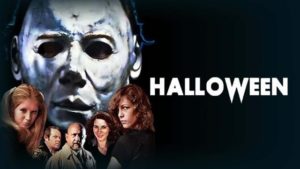 Halloween is a 1970s masterpiece and this film has seen many reinventions and reincarnations throughout the years. The main character of this movie is Michael Myers played by Tony Moran and it’s inspired by a real-life killer, Edmund Kemper. The movie also features Jamie Lee Curtis with her very first leading role.

This movie is regarded as one of the most iconic and scariest horror films of all time. The serial killer lures young females into his car in a charming way before killing them to do some unspeakable heinous acts with them. If you like watching horror movies, you should see Michael Myers in action on Halloween. 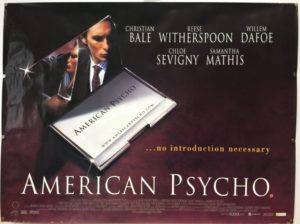 American Psycho, starring Christian Bale (as Patrick Bateman), polarized audiences and critics back in 2000. It has 7.6/10 ratings on IMDB, but it received 85% ratings on Rotten Tomatoes. This divide isn’t only due to the off-putting nature of the movie’s violence but also due to the polarization of the movie’s genre placement.

It feels too absurdly funny to be horror and too creepy to be a comedy. It’s based on a novel written by Bret Easton Ellis, where the main character, with a psychopathic ego, targets women. 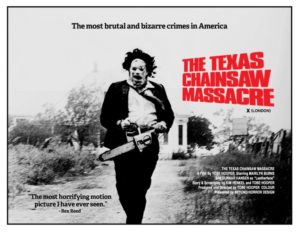 If you like to see horror and thriller movies, you would already know that there have been plenty of reinventions and reincarnations of the Texas Chainsaw franchise. However, the Texas Chain Saw Massacre is still the best iteration that flaunts excellent ratings on both IMDB and Rotten Tomatoes.

It’s also based on the serial killer that’s featured on the Silence of the Lambs and Psycho, Ed Gein. He is also known as Plainfield Ghoul and Butcher of Plainfield, and it’s difficult to decide which one is more disturbing and terrifying.

It’s hard to believe that such a monster actually existed in real life. The serial killer likes to make keepsakes and wear suits made out of human body parts. The Texas Chain Saw Massacre is based on a true story, but its realism doesn’t stop at that fact. It portrays the horrific events that appear almost lifelike.

9. A Nightmare on Elm Street 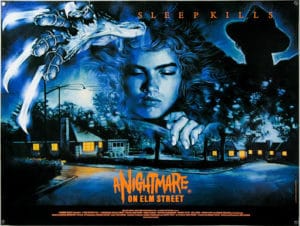 You might have already heard the rhyme, “1, 2 Freddy’s coming for you”. A Nightmare on Elm Street explains the story of Freddy Krueger, who was in real life a child killer and was murdered by his parents.

But, unbeknownst to them, Freddy had evolved into an astral form that could come in the dreams of people. When the kids of those people who murdered him reach a certain age, Freddy starts killing them while they’re sleeping, where their parents are powerless to defend them.

The fight sequences in Nightmare occur in dreamscapes, where the waking life laws of physics don’t apply, making everything terrifying. A Nightmare on Elm Street may appear old in terms of fashion and style, but the horror it evokes is as palpable now as it was decades ago. 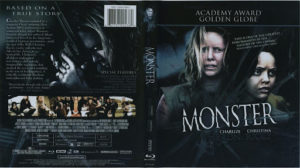 This movie tells a devastating and dynamic true story of a woman who is also known as the very first female serial killer. Charlize Theron plays the role of the killer, and you’ll never see her like this in any other movie.

She plays the role of a sex worker who killed 7 of her male clients, and it’s one of the many shocks that “Monster” delivers. 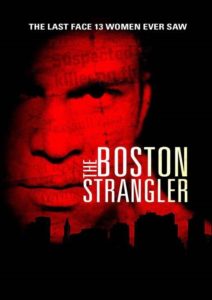 The Boston Strangler allows you to see Henry Fonda and Tony Curtis in action, and the movie takes place in the 1960s. As the name implies, it explains the story of a Boston area where more than a dozen women were murdered.

12. Henry: Portrait of a Serial Killer 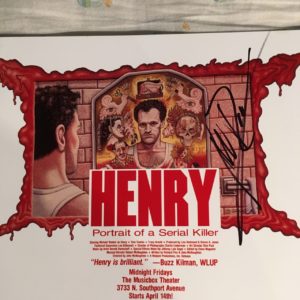 A 1986 movie that features a serial killer AKA “The Confession Killer”, Henry Lee Lucas. If you have seen the Confession Tapes on Netflix, you’ll recognize him in “Henry: Portrait of a Serial Killer”.

Interestingly, Henry Lee Lucas was more of a confessor than a killer because he confessed more crimes than he actually committed in real life.

While lying is not a similar crime to committing a murder, it’s disturbing and terrifying to think that Henry Lee Lucas was so obsessed with killing that he wanted to take credit for murders he didn’t commit.

However, you’ll see Henry Lee Lucas in “Henry: Portrait of a Serial Killer” being treated for his three confirmed victims. 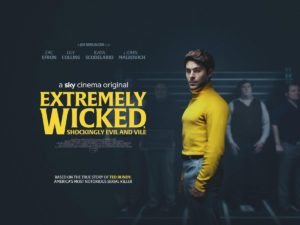 The audience got too excited when Zac Efron played the role of Ted Bundy in 2019 in Extremely Wicked, Shockingly Evil, and Vile. It’s a Netflix movie in which the beguiling and handsome stranger entices young female victims.

The Extremely Wicked, Shockingly Evil, and Vile is more of a biographical drama, and unlike other films, it doesn’t get too personal with the horrific side of Ted Bundy. You’ll only see hints of his horrific crimes in the movie as the court case progresses and the judge sentences him to death. 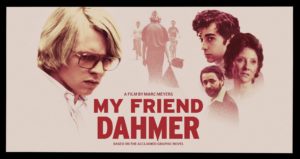 My Friend Dahmer is based on one of the darkest murder stories. It starts with the high school life of Jeffrey Dahmer right before he starts his murderous spree. There is also a big difference in audience and critics ratings.

It flaunts 86% ratings by critics and only 61% by the audience on Rotten Tomatoes. The IMDB ratings are also low (6.2/10). The main character is played by Ross Lynch, a former Disney Channel star, just like Zac Efron’s Ted Bundy portrayal.

If you want to see an 18-year-old high school student doing unthinkable things due to eccentric fascinations, maladaptive coping, and obsession, My Friend Dahmer is the right movie for you.

What are your favorite movies about serial killers?

These are some of the best movies about serial killers of all time that you can watch. Some of them are horror and others are made in a documentary style.

However, all of them contain descriptions of violence, and you should definitely watch them if you’re not a faint-hearted person.