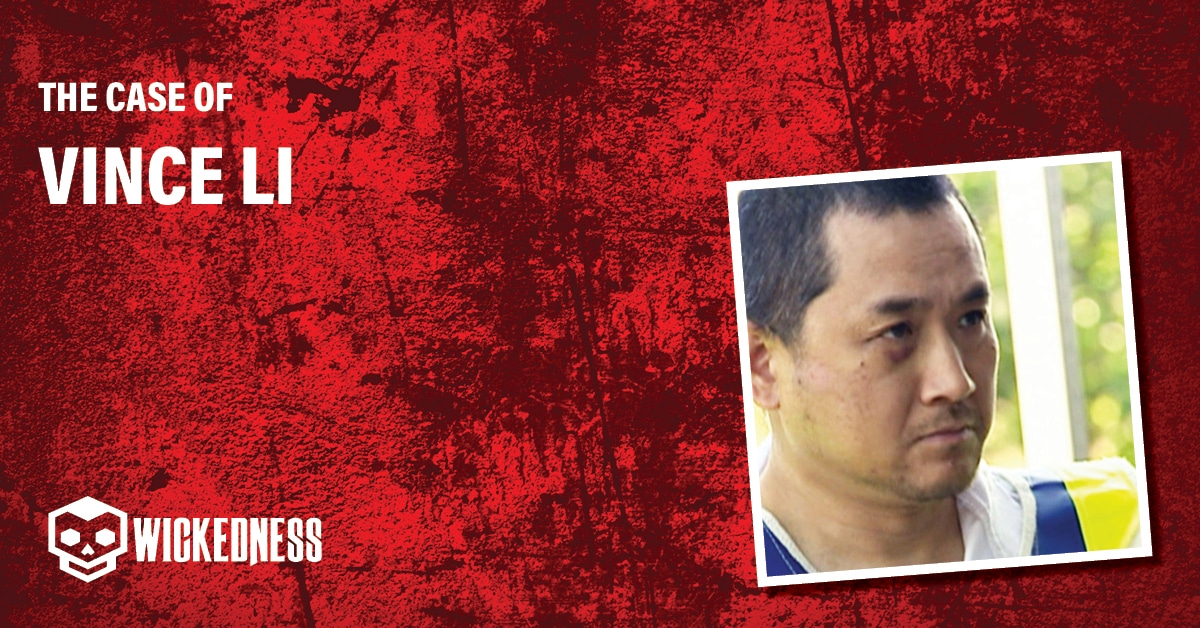 Vincent Weiguang “Vince” Li was born on the 30th of April, 1968, in Dandong, Liaoning. In 1992 Vince Li graduated with a bachelor’s degree in computing from the Wuhan Institute of Technology. He then worked in Beijing as a computer software engineer between 1994 and 1998. On the 11th of June, 2001, Vince migrated to Canada, where he worked in Winnipeg at menial jobs at Grant Memorial Baptist Church for six months to support his wife, Anna..

In 2006, Vince abruptly moved to Edmonton, leaving his job at the Grant Memorial Church and his wife alone in Winnipeg until she joined him later. In Edmonton, he worked at Walmart, at a fast-food restaurant, in newspaper delivery, and as a forklift operator. Four weeks before the killing, Vince was fired from Wal-Mart after having a “disagreement” with other employees.

On the 29th of July 2008, Vince caught a bus from Winnipeg to Erickson, Manitoba. He spent the night on a bench outside a grocery store in Erickson. The very next morning, he sold his laptop to a boy.

That night on the 30th of July 2008, Tim McLean was returning home from work after working a fair in Edmonton. He boarded the Greyhound Canada bus. Vince Weiguang Li also boarded the same bus a short time after and sat neck to Tim. Tim had fallen asleep when Vince suddenly withdrew a knife and began stabbing him to death while horrified passengers looked on. The attack took place as the inter-city Greyhound bus traveled past Portage la Prairie, about 40 miles west of Winnipeg. He proceeded to dismember, decapitate and cannibalize Tim McLean’s body. Passengers fled the bus, and police arrived. After a day-long standoff with police Vince Li finally attempted to escape the bus through a window. He was, however, tasered and arrested. The police recovered most of Tim McLean’s remains, some of which were later found in Vince Li’s pockets. However, Tim McLean’s eyes and part of his heart were never recovered and are presumed to have been eaten by Vince.

A witness stated that Vince showed no emotion the whole attack, his actions appeared robotic, and he was oblivious to the presence of others.

Timothy Richard  Mclean “Tim” was born on the 3rd of October, 1985, in Winnipeg, Manitoba. He grew up both in Winnipeg and in Elie, Manitoba. Tim was 22 years old at the time of his death. He had been working as a carnival worker, specifically a carnival barker, in Edmonton, Alberta. On December 21, 2008, five months after Tim was murdered, his son was born.

The trial began on the 3rd of March, 2009. Vince Li pleaded not criminally responsible on account of a mental disorder. This means that Vince accepts that the offense did occur but claims that he was unable to form the necessary mental element. He was ordered to get a psychiatric assessment. A psychiatrist testified that Vince performed the attack because he was hearing voices that he believed were coming from God. The voices were telling him to destroy the demon sitting beside him, or he would be killed himself. Judge, John Scurfield, accepted the diagnosis and declared that Vince Li was not criminally responsible for the killing. Vince Li was remanded to a mental institution. He was sent to the Selkirk Mental Health Centre, where he spent six years before being released in 2015.

Tim McLean’s family brought a lawsuit of $150,000 against Greyhound, the Attorney General of Canada, and Vince Li.

Vince was granted supervised walks within his mental facility as voted by the provincial review board on the 3rd of June, 2010.

On February 16, 2011, two of the passengers present during the attack filed a lawsuit against Vince Li, Greyhound, the RCMP, and the Government of Canada for being exposed to the horrific beheading. They are each seeking $3 million in damages.

What happened to Tim McLean?

Tim Mclean, a 22-year-old Canadian man, was stabbed, beheaded, and cannibalized by Killer Vince Li while riding a Greyhound Canada bus home from work on the 30th of July 2008.

Vince was declared not criminally responsible for the killing. This came after a psychiatrist testified that Vince performed the attack because he was hearing voices that he believed were coming from God. The voices were telling him to destroy the demon sitting beside him. Vince Li spent six years in the Selkirk Mental Health Center before being released into independent living in 2015.