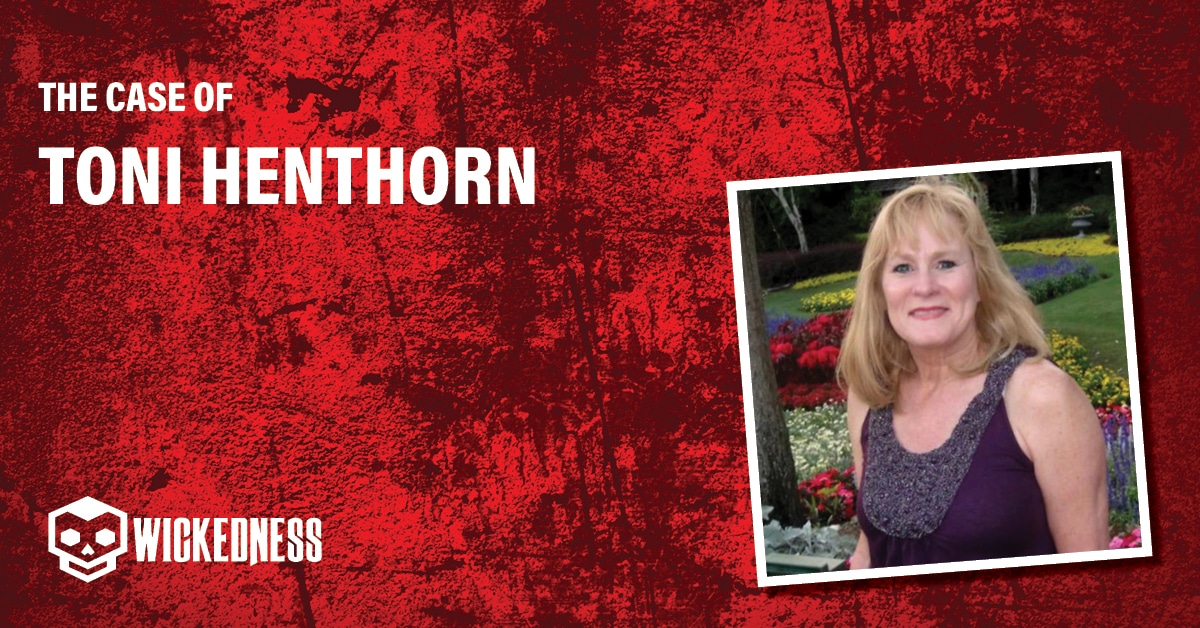 Mother and wife pushed to her death by her significant other

Toni Henthorn was murdered by her husband Harold, leaving their 10-year-old daughter Hayley without a family

The death of a parent can be a traumatic experience for a child. Haley Henthorn experienced such pain when her mother, Toni Henthorn, was killed on a hiking trip in 2012. Her father was ultimately arrested and convicted of her death, leaving Hayley alone at the age of 10.

It was Saturday, September 29, 2012, when husband and wife Harold and Toni Henthorn were hiking at the Rocky Mountain National Park in Colorado, United States. That weekend they were celebrating their 12th wedding anniversary.

Toni and Harold met online on a Christian dating site in 1999 and married just nine months later. Toni was a successful eye surgeon and had dreams of having a loving marriage and a family. Dreams that all seemed to have come true when she met Harold.

When they met, Harold told Toni he was a wealthy businessman who fundraised for schools and churches. He persuaded Toni to move from her home in Mississippi to Colorado. A difficult move for Toni as she was required to move away from her friends and family, but she did so willingly for the man she loved. In 2005 she gave birth to their daughter Hayley and her life was complete.

On September 29, Toni and Harold set off on their hike. Just before 3.30 pm, they left the trail to have lunch on top of a scenic cliff. They then decided to continue off-trail and found a cliff at 4.45 pm. Less than 30 minutes later, Toni fell off that same cliff and fell 130 feet to the ground. Harold called 911; however, the call was placed at 5.54 pm even though Toni fell almost 45 minutes earlier.

Harold told police that this was because it took fifteen minutes to reach her and a further thirty minutes to assess the situation and move her. During the 911 call, Harold told the operator that Tori’s breathing was weak and that she had a head injury. He also told the operator to send a helicopter. Harold then spoke to a different operator and informed them that he had built a fire in a rock enclosure, and Toni’s breathing had become more shallow and later confirmed that she was no longer breathing.

Harold informed the operator that he had tried chest compressions, and she gave him instructions on how to do it properly. He made a further 911 call and asked if help was on its way. The operator informed Harold that the ranger was calling out for him, but he did not hear any calls. Finally, the EMT ranger arrived around 8 pm. He examined Toni, but it was too late. She was dead.

Police spoke to Harold about the circumstances surrounding Toni’s death; however, his story kept changing. He told police that he did not see her fall as he was reading text messages and just saw what he described as a blur. However, Harold told others that Toni had wandered too close to the edge. He told another person that Toni slipped trying to take pictures.

The 2012 killing of Toni Henthorn is not the first suspicious death linked to Harold Henthorn. His previous wife also died under “accidental” circumstances that have since been brought back for re-examination. Before his marriage to Toni Henthorn, Harold Henthorn was married to Sandra “Lynn” Henthorn. She died in 1995 in an incident that occurred on Colorado 67, several miles west of Sedalia.

Initially, this case appeared as though the death of Toni was a terrible accident. However, it was Toni’s parents who led investigators to believe otherwise. As soon as they heard the news, Toni’s dad, Bob Bertolet, said, “he pushed her.” Toni’s parents informed investigators that they had been worried about her for some time. He took control of Toni’s life and cut her off from family and friends. Toni’s mum, Yvonne, wanted to discuss her concerns with Toni, but she always received the same response, “if you do that, ill suffer the consequences.”

During the investigation, Harold told the ranger he was not familiar with the area and that he had only been there once. However, evidence discovered by the police stated otherwise. Harold’s phone records showed that he had been there eight or nine times in a six-week period before that day. In addition, he had mentioned seeing a white sheet on the cliff where Toni fell, but that sheet had been removed a week before Toni’s fall. Police also found a map of the park in his car, and there was a pink “X” marked on the spot on the map where Toni fell.

A medical examiner stated that there was no indication that any attempt at CPR had been made.

In 2015 Harold was sentenced to life in prison after being found guilty of pushing his second wife, Toni, off a cliff in Rocky Mountain National Park in 2012. Prosecutors said Harold Henthorn would have been the beneficiary of 4.7 million dollars in life insurance he had taken out on his wife. Prosecutors also believe Henthorn killed his first wife, Lynn, who died in 1995 in Douglas County under mysterious circumstances.

What about Hayley Bertolt?

At the time of Hayley’s mum’s murder, she was ten years old. With her mother murdered and her dad convicted, Hayley was left without a family. Haley was assigned to Barbara Cashman, her guardian. According to Barbara, when she first met Haley, she realized that the small girl was overly influenced by her father. She even tried to convince Barbara about her mother’s clumsiness and how the fall could have been natural.

However, things changed after Harold’s arrest, and Haley finally broke free of her father’s clutches. Around this time, Toni’s brother, Barry Bertolet, and his wife, Paula, decided to try and get guardianship of Haley. Supported in their endeavor by Barbara, they approached the courts and filed a petition. Reports vary on whether Harold fought to keep custody of her daughter, but ultimately, Barry and his wife were granted full guardianship of Haley in 2015.

Today Hayley would be around 17 years old. She prefers to keep a low profile and opts to stay away from social media.

Where is Haley Bertolt now?

Haley Bertolet, daughter of murdered mother Toni Henthorn is about 16 years old. She has remained out of social media and out of the public stage.

What is Harold Henthorn’s current age?

Is there a book on Harold Henthorn?

Yes, there are two books based on the Harold Henthorn story, Black Widower and The Accidents. Both are well-researched books that dive into the chilling life story of Harold Henthorn.