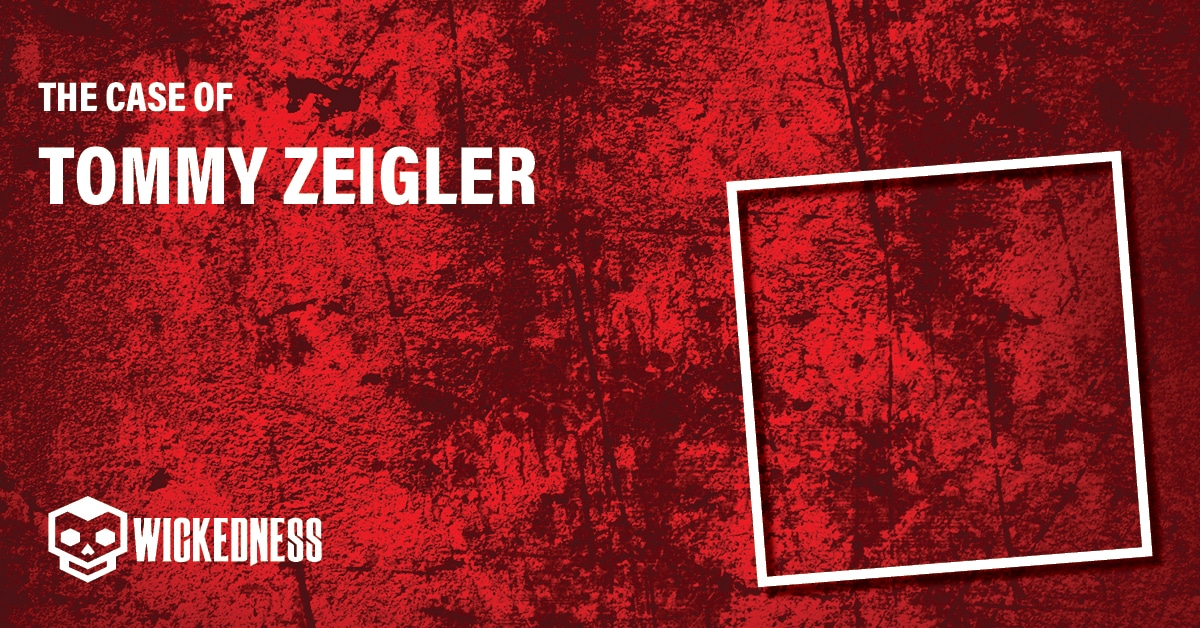 Eunice Zeigler was the wife of Tommy Zeigler, also known as William Thomas Zeigler. Perry Edwards Sr. and Virginia Edwards were Eunice Edwards Zeigler’s parents. Charlie Mays was a customer at the Zeigler family furniture store and lead a team of migrant workers. Perry Edwards and Virginia Edwards came to town to visit their daughter and husband, Tommy Zeigler for the Christmas holidays. Several months before the murders, Tommy Zeigler took more than one life insurance policy on his wife, Eunice Zeigler.

The total of the two policies equaled $500,000. Legal experts considered the insurance money as a motive for the murder, however, the Zeigler furniture store was an excellent source of income. Thomas Zeigler invited his family members to the furniture store, promising a recliner as a Christmas gift for Perry and Virginia Edwards.

On the night of December 24, 1975, Thomas Zeigler called the police in Orange County, Florida, to tell them he had gunshot wounds. He initially blamed one of the victims of the quadruple murder, Charlie Mays, for the incident.  Eunice Zeigler and Victoria Edwards died from gunshot wounds, while Perry Edwards and Charlie Mays died from a beating with a metal crank in the furniture store murders.

The police found five guns at the crime scene with links to different individuals, including Tommy Zeigler, Felton Thomas, and Ed Williams. Felton Thomas and Charlie Mays went shooting with Thomas Zeiglerthe day of the murders. Authorities believe this was an attempt to get fingerprints on the guns to later frame Felton and Charlie for the murders. Ed Willams turned in his gun after the murders, stating Thomas Zeigler gave it to him earlier that day. Thomas, however, stated the gun went missing from his truck two weeks before the crime.

Eunice Zeigler and her mother, Victoria Edwards, were shot to death. A total of 30 gunshots were counted during the investigation. Perry Edwards and Charlie Mays were beaten to death. Eunice Zeigler was found with her hand in her coat pocket. Investigators believe her casual position indicated familiarity with the assailant. Charlie’s pockets were full of store receipts and cash, possibly planted on him. One witness reported he was at the store to pick up a television.

Tommy Zeigler: His Life Before the Murders

Other than working for the successful family furniture store business, Tommy Zeigler was an advocate for the safety and fair treatment of black residents in his community. This was not a popular stance, however, and threats were made to his life by active police officers. He spent time trying to rid the area of lone sharks and the Edgewater Hotel, which was associated with many illegal activities. Zeigler found himself on the opposite side of a court trial with a black man and Judge Maurice Paul. This judge later overturned the life sentence for Zeigler appointed by jurors, placing him on death row instead. Judge Maurice Paul refused to hand the case over to someone less biased.

With five guns, a metal crank, and various blood samples, the investigation quickly became confusing. At the time of the murders, DNA testing was not as efficient as it is today. Many theorists state that necessary and available tests were not carried out, as well. Some of the guns were registered as Tommy Zeigler’s. One person of interest, Ed Williams, willingly gave his gun to authorities immediately after the murders. He stated Zeigler gave it to him the day of the murders. Police reports state some of the guns were wiped clean to erase fingerprints.

The clean guns were given to Charles Mays and Thomas Felton earlier in the evening for shooting practice in Orange Grove. Poor processing of evidence accompanied the loss and destruction of evidence, as well. Blood evidence on the victims and Tommy Zeigler did not match up, and some were not tested properly to get a definitive diagnosis of the situation. Defense lawyers continue to seek updated DNA testing. Some speculate that the courts made a fatal flaw and new DNA evidence may reveal the truth.

Ernie Mays, Charlie Mays’ son, mentioned seeing his father with a gun. Ernie Mays also remembers being told they would get a TV and have a lot of money for Christmas. Charlie Mays’ wife, Mattie Mays, testified she was with her husband when he won $400 gambling the day before the murders. Her statement was later proved false regarding the money found in Charlie May’s pocket the night of the murders. It was also said Charlie Mays had the money in his pocket to the Zeigler Furniture store to pay for the television. Edward Williams mentions jumping over a 6-foot fence to flee the murder scene, with Mays parking on the other side of the 6-foot chain link fence.

The Trial and Ongoing Complications

Tommy Zeigler was convicted and given the death penalty on July 2, 1976. He has spent over four decades on death row,  with stays implemented numerous times. The state repeatedly denies modern DNA testing on the evidence. DNA analysis of the blood on various clothing items may clear up some of the confusion about the death of Perry Edwards, especially. The final blows with the metal crank should have caused a significant amount of blood splatter to hit the perpetrator. The blood type on the murderer’s clothes should match the blood type of Perry Edwards.

Controversial theories have surfaced, blaming the state for wrongly convicting Zeigler and denying additional testing to cover up their mistake. There has also been speculation about Perry Edwards Jr’s involvement in planning the murders. Zeigler’s defense attorney has worked for many years to prove his innocence.

A polygraph test on William Thomas Zeigler shows he told the truth about his involvement, while the accounts given by Ed Williams and Felton Thomas raise questions. The private investigator for Zeigler was investigator Lynn-Marie Carty. She located a witness named Robert Milton Foster. Don Frye, another investigator on the case lied, saying the witness did not exist. The team was trying to find the connection between Mays and Robert Foster. Zeigler’s lawyers continued to fight the death sentence and eventually, the death penalty got removed, only to get reinstated in 1988. In 1986, Zeigler received a stay due to inadequate representation.

In 2001 post-conviction DNA testing showed Perry Edward’s blood on the shoes and pants of Charlie Mays. This testing also showed an absence of Perry’s blood on part of Zeigler’s shirt.

Lawyers asked for Touch DNA analysis and were refused in 2017. The case is considered closed, but Zeigler continues to fight the charges. In 2021 a prosecutor agreed to move forward with DNA testing on the evidence. General Ashley Moody wants to stop this from taking place, so the evidence sits untouched. The Zeigler case is considered one of many unsolved mysteries as the lawyers continue to ask the court for DNA testing.

All prosecutors must be notified of advanced testing post-conviction. The case for more post-conviction DNA testing went to the Florida Supreme Court in 2021. The Courts for DNA Testing want proof that this analysis in death row inmate Zeigler/s case can help exonerate him before moving forward with the testing.

Ken Roach and Linda Roach were not allowed to speak at Zeigler’s trial, however, they witnessed 12- 15 gunshots all within four seconds, fired at the Zeigler furniture store as they drove by the night of the murders. More than one person would have to be involved for this many shots to go off in four seconds. Zeigler continues to ask for modern DNA testing of evidence in the Orlando humidity-controlled vault. This includes guns, clothes, fingernail scrapings, and fingernail clippings.

Many people have spoken out on the possible injustice of the Zeigler trial. Sarah Wilson of Channel ( in Orange County covered the case at one point. Leatrice Williams Walton is a lawyer eligible by The Florida Bar. She spoke on the case and the possible innocence of Zeigler in a 2013 documentary. David Michaeli provided pro-bono work on the case. Most arguments revolve around the courts denying Zeigler’s team access to 21st-century science. The location of the gunshot wound on Zeigler makes some accounts of events impossible, as well.

Many questions remain about the people involved in persecuting Zeigler. Donald Frye, for example, became close friends with Perry Edward Jr. to the point of sleeping over during the investigation of Zeigler. Inappropriate relationships and meetings may have led to problems for the Zeigler defense team. Detective Frye had knowledge of the DNA results of Zeigler’s shirt and allowed false information to circulate in the media, as well. Monique Worrell, a state attorney agreed to the DNA testing that General Ashley Moody continues to fight.

There is also suspicion of abuse by Perry Edwards Jr. towards his daughter. Perry Edwards Jr.’s son-in-law says he witnessed the beating of the pregnant girl. Further conflict revolving around Perry Edwards Jr, involves the separation from his wife Sandra May Edwards. Even one of the jurors that convicted Zeigler, Bianca Jagger, now pleads for fair DNA testing. News Anchor Greg Fox interviewed Zeigler to bring awareness. There is also scrutiny around poor media coverage by the Sentinel that may have led to the conviction of William Thomas Zeigler Jr’s arrest. Even an armed robbery police report was hidden from Zeigler’s defense team.

The trial ended with Thomas Zeigler Jr. getting the death penalty for the murder of Eunice Edwards Zeigler and Charlie Mays. Monique Haughton Worrell of the Conviction Integrity Unit also stated Zeigler did not receive a fair trial. Aramis Ayala, also from the Conviction Integrity Unit, spoke out against further testing for the Zeigler case in 2019, however. William Thomas Zeigler received a life sentence for the murder of Perry and Virginia Williams. The media has covered the case for many years, with Times photographer Cherie Diez working with researchers to bring awareness.

The execution has not taken place due to the continued fight for modern DNA testing. A key piece of information sought is the father in laws blood on anyone’s clothing. Whoever killed Perry Edwards with the metal object could not have done so without getting Perry’s blood all over them. Without additional DNA testing, the truth may never come out. The death warrant for Zeigler signed by former Governor Bob Graham in the 1980s still resonates today. You can read more about the case in the book “Fatal Flaw” by Phil Finch.

The courts convicted Tommy Zeigler of the murders of his wife, her parents, and Charlie Mays. A lot of controversy surrounds the case, leaving many theories still open to consideration if authorities move forward with Modern Touch DNA testing in 2022. At present, he remains a death row inmate in

Who is Charlie Mays?

Charlie Mays was a customer at the Zeigler family furniture store and murder victim. He was beaten with a metal crank. Zeigler claimed he was involved in the robbery at murders of his wife and in-laws.

Why is it taking so long to get DNA testing on the Tommy Zeigler Case?

Modern Touch DNA testing did not exist when Tommy Zeigler was first convicted. Some of the testing during that time period had to be completed within 14 days of collecting the evidence, as well. This DNA testing was not completed and Zeigler’s defense team has fought for a second chance at DNA testing for 45 years. With modern forensic testing, authorities might be able to answer many of the questions surrounding the Zeigler case.