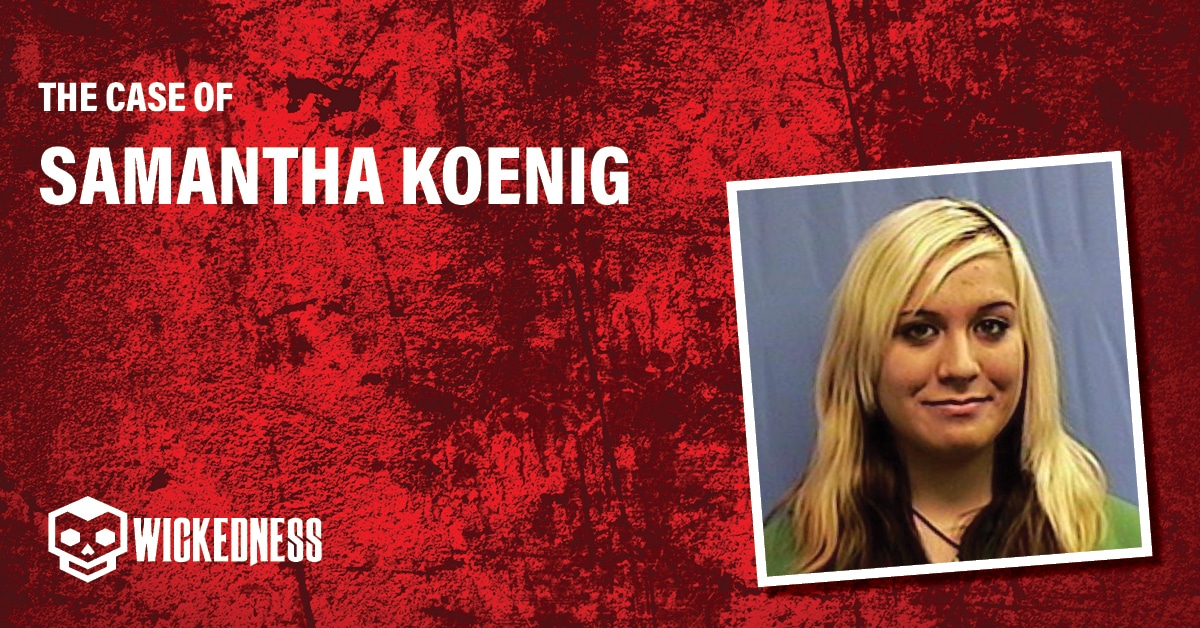 18-year-old Samantha Koenig was a teenage girl working as a barista in a roadside kiosk in Anchorage, Alaska. She led a usual life, up until one cold February day when a stranger wearing a ski mask walked into her kiosk and asked for a cup of coffee. While standing by her kiosk’s window, he pointed a gun at her…

Little is known about Samantha Koenig’s life, except that she was an 18-year-old girl working at her first job, in a small roadside coffee kiosk. She had an ex-boyfriend, against whom she recently filed a restraining order. Her father had some criminal connections, but she tried to live a normal life as a young adult. Unfortunately, she spent the last few hours of her life like in a horror movie.

The Night When Samantha Koenig Was Abducted

On February 1, 2012, Samantha Koenig was working her shift as usual. She served her customers with a smile, patiently waiting for her shift to end. Just when her shift was nearing its end, a man named Israel Keyes came to buy coffee. She served him in a friendly manner, but his response shocked and terrified her. He pulled out a gun and pointed it at her.

He demanded her to hand over all of the cash from the register, to which she obliged. Then, he tied her hands behind her back using zip ties. Initially, he sent a text message from her cell phone to her boyfriend, trying to lure him and kidnap him as well, but he gave up on that idea. He stuffed a paper napkin in her mouth and dragged her away to his car, a white Ford Focus. At one point, she tried to run away, but he quickly caught onto her and dragged her back to the vehicle. There is footage that caught these moments, and it will be Samantha’s last time to be seen alive.

The Murder And A Proof Of Life

As he was driving her to his home, he told her this was kidnapping for ransom, and that she will be returned to her family unharmed if she cooperated. However, that was a lie. Once they arrived, her kidnapper took her to a shed behind his house and locked her there. Israel went inside his home to check on his girlfriend and daughter. They were sleeping peacefully, and he was free to carry on with his devious plan.

He poured himself a glass of wine and went back to the shed where Samantha Koenig was being held. There, he revealed his plans to her. He planned to rape and then kill her. Soon, he wrapped a noose around her neck and forced her to lay on her stomach. As she begged him not to rape her, he used a knife to cut through her clothes and raped her violently. Once he was done, he started to pull the rope that was around her neck, watching her as she died slowly, trying to fight in vain.

What made this crime even more horrific, is that after he murdered her, Israel left her body to freeze in the shed and went on a two-week cruise vacation with his daughter and girlfriend. While her family worried about what happened to Samantha, her killer was enjoying a happy life with his family.

However, this wasn’t the end for Samantha Koenig. After he returned from his vacation, Israel Keyes decided to further use Samantha’s body for his gain. He took her frozen body, braided her hair, and applied makeup to her face. Using a fishing line, he sewed her eyelids so that her eyes remain open. He took a photo of her, along with a current issue of Latin Times. This was done in order to demand ransom money from her parents, leading them to believe that their daughter was still alive. After he took a photo of Samantha Koenig and sent the ransom note to Anchorage Daily News, Israel dismembered her body and threw it in Matanuska Lake, Anchorage.

Her parents finally had a hope that Samantha was still alive, so they gladly paid the ransom money. They deposited the money into her account. Little did they know, that their daughter was already dead. But, at least, they got closer to catching her killer.

Israel Keyes – A Serial Killer That Roamed Free For Too Long

Israel Keyes was born on January 7, 1978, in Richmond, Utah, to the parents Heidi Keyes and John Jeffrey Keyes. He was the second oldest of ten children. The Keyes family was Mormon until they joined another church called the Ark, whose teachings promoted a white supremacist ideology.

Isreal showed sadistic tendencies from a young age. He liked to torture and kill animals, and he was involved in robberies, arsons, and other antisocial behaviors. At one point, he confessed to his extremely religious parents that he was an atheist, which led to him being kicked out of their home and shunned.

He committed his first sexual assault in the summer of 1997 or 1998 when he raped a teenage girl near the Deschutes River in Maupin, Oregon. Initially, he planned to rape and kill her, but he changed his mind and released her after the rape. In 1998, he enlisted in the US Army and was employed in Sinai, Egypt. After 3 years, he was honorably discharged.

When he was back in the USA, he lurked on randomly chosen victims, all across the USA. Most often, he preyed on lonely women driving on the interstate highways or on backroads. In several locations, he hid murder kits containing weapons and tools for kidnapping and murdering his victims.

In 2007, he started his own construction business in Alaska, called Keyes Construction, which allowed him to have a good excuse for traveling across the country. At first glance, he lived a quiet life, and apart from his troubling youth, he had no sex offenses, no crimes of violence in his history, and no one could suspect him of being a serial killer.

The police had no real clues regarding the investigation of Samantha Koenig’s disappearance, until March 2012, when her parents paid the ransom money as requested. Since they deposited that money into Samantha’s account which was connected to her debit card, soon the police were able to track the withdrawals. They concluded that her abductor was traveling along Interstate 10.

Isreal Keyes made a mistake during one of the withdrawals that would eventually have the caught. He was masked each time he withdrew the money, but on one occasion, the ATM camera captured a white Ford Focus. On March 13, 2012, the same car was spotted in a hotel parking lot in the town of Shepherd. The police followed the car when it left the parking lot, and once it exceeded the speed limit, the police had an excuse to pull over the driver.

While searching the car, the police officer found Samantha Koenig’s ATM card and mobile phone. They also found a disguise worn by the man who was withdrawing the money from all the ATMs. This was enough to arrest him. A few days later, Israel Keyes confessed to murdering Samantha Koenig, as well as several other victims. The police realized they just caught a serial killer.

Israel Keyes agreed to confess to his crimes, including murder, rapes, bank robberies, etc., but on one condition: that the information about those murders remains hidden from the public, in order to prevent his daughter from finding out the truth about her father. He also wanted to receive the death penalty.

At first, Israel Keys was extremely cooperative, as he revealed the location of Samantha’s body and shared the details from other cases, but soon he felt frustrated and betrayed by the law enforcement when he realized that the public knows about his case.

Israel Keyes didn’t live long enough to be trialed. During one hearing, he attempted to escape by breaking his leg irons. He was restrained by the authorities and placed on a watch. However, he managed to smuggle a razor blade into his cell on December 2, 2012. He used it to slit his wrists and end his life.

While he was dying, Isreal Keyes used his own blood to leave an odd message: he drew 11 skulls and a pentagram, along with writing “We Are One”. This led the investigators to believe that he killed 11 victims, the last one of them being Samantha Koenig. There is a possibility that there were many more unknown victims.

Who Was Samantha Koenig?

In 2012, Samantha Koenig was 18 years old and working at a coffee shop called Common Grounds in Anchorage. There she was abducted and killed by Israel Keyes. Her body was recovered from the frozen lake by the FBI’s dive team on April 2, 2012.

Who Is Israel Keyes?

Originally from Utah, Israel Keyes was a serial killer that killed his victims undetected from 1998 to 2012, across several US states.

What Was The Ransom Photo?

Israel Keyes arranged Samantha Koenig’s body in order to look alive and took a photo of it, demanding $30.000,00 of ransom money.

How Did Israel Keyes Die?

On December 2, 2012, Israel Keyes managed to conceal a razor blade in his jail cell at the Anchorage Correctional Complex in Alaska, which he used to take his own life.