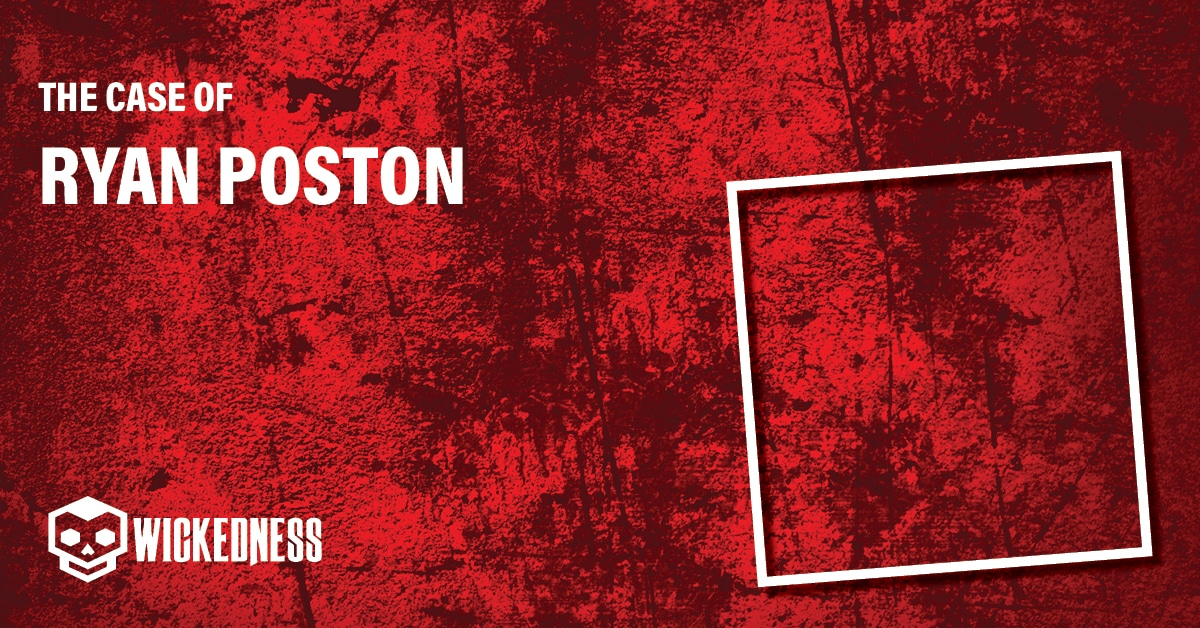 Ryan Poston was born on December 30, 1982 to Jay and Lisa Poston. His parents got divorced when Ryan was still a kid, and his mother remarried a man named Peter Carter. Peter raised Ryan Poston as he was his own son, and as a tribute to Peter, Ryan later changed his middle name to Carter.

Ryan Carter Poston grew up in a very well-known and well-connected family in northern Kentucky.  Ryan lived with his mother, his stepdad and his three half-sisters Alisson, Katherine and Elizabeth. He was a very protective older brother.

The family moved to the Philippines when Ryan was a teenager and later to Switzerland where Ryan would graduate from the International School of Geneva. Then the family moved back to Kentucky and Ryan was very excited to reconnect with his dad Jay Poston. They went back to having a really close relationship.

Most women considered Ryan Poston “the whole package” he was very handsome, ambitious, successful, and intelligent. His friends said that girls would already love him whenever he entered a room. He was charismatic and loved to discuss politics; he had a love for knowledge. He also had a love for guns; he was a collector.

After high school Ryan Poston went to Indiana University for his bachelor’s degree he triple majored in history, geography and political science. He then went on to law school at Northern Kentucky University in highland Highs. After getting his law degree, Ryan began working as an attorney in Cincinnati.

In 2009 Ryan met Lauren at a local bar. She was a law student at the same university Ryan had graduated from. It was love at first sight. They soon moved in together and adopted two puppies. Sadly the couple wouldn’t last long and get married like everybody was expecting. They broke up in 2011.

Shortly after Ryan and Lauren broke up, he dated one of her friends. Ryan met 19-year-old Shayna Hubers. She was about to finish her degree in psychology at the University of Kentucky, she also did some part-time modeling in her free time. Shayna was used to getting everything she wanted and being the best in everything. She was also known for not being able to handle breakups very well.

Ryan Poston and Shayna dated for 18 tumultuous months. There were fights all the time, cheating on both sides, and temporary breakups. Shayna had become very possessive of Ryan and had even learned how to hack Ryan’s social media to spy on his every move. Ryan’s family, friends, and even some of his neighbors had been dragged into the drama of the relationship. Ryan told his close circle that Shayna was the craziest girl he had ever met and that he had actually become scared of her. But as toxic as this all sounds, they still managed to maintain the relationship going.

Shayna used to tell people how verbally and emotionally abusive Ryan was to her. According to her, Ryan kept constantly telling her she needed a boob job and to lose weight. That he was the worst abusive boyfriend.

In the fall of 2012, Shayna was 21, and Ryan was 29. She had just started her master’s program in psychology. Ryan was involved in a lawsuit with his former law partner and had become extremely frustrated with the situation.

On October 1, Ryan took Shayna to a gun range with him. Later that day, Shayna texted a friend the following:

“When I went to the shooting range with Ryan tonight, I want to turn around and shoot him and kill him and play it like it’s an accident.”

Ryan Poston’s assistant Laurie was very worried and disturbed by Shayna’s obsessive behavior towards Ryan. She had witnessed firsthand how Shayna would call him from 60 to 100 times a day to his office. If he didn’t pick up she would start calling the receptionist and if that didn’t work she would show up at his office and refuse to leave. It was a very turbulent relationship.

On October 4, 2012, Ryan texted his friend about wanting to disappear from town because that would be the only way of getting away from Shayna. He had started to fill his head space and time with work and was spending less and less time with Shayna. He would eventually start talking to other women.

On October 11, Shaina joined Ryan at his parent’s house to watch the presidential debate. After they were done with dinner, Ryan told his dad he was going to finally leave Shayna. After the debate, they went back to Ryan’s apartment and he told Shaina he wasn’t going to be able to see her that weekend.  Shaina became very upset and couldn’t sleep. She called her mother to tell her she wasn’t feeling ok and her mother drove 80 miles to Ryan’s condo and spent the night with Shayna.

On October 12, Ryan woke up to see Shayna’s mother sleeping on his couch. Shayna claimed she still wasn’t feeling well and that now she had chest pain. Shayna asked Ryan to take her to the ER, but he refused to do so she left with her mum.

The 29-year-old lawyer had recently added Miss Ohio, Audrey Bolte, on Facebook. They had been chatting and finally decided to meet at a local bar that day. Shayna probably knew this since she had managed to hack Ryan’s social media accounts and was always spying on him and everything he was doing. Actually, Shayna herself had sent a friend request to Audrey on Facebook on October 10.

During the day, Ryan told his co-workers how excited he was about his date with Audrey. His assistant was excited for him, but she couldn’t hide how worried Shayna’s possible reaction to this made her feel. She told Ryan to please be careful. He told her not to worry because everything was under control.

Contrary to what Shayna told Ryan, she had not even stepped into the ER instead, she spent the day shopping with her mother.

Ryan made it home after work that day. He was indeed excited about meeting Audrey. They were first meeting in his condo but later agreed to just go to a bar. Around 8:30 pm, Shayna showed up in Ryan’s condo unannounced.

At 8:54 PM, a 911 dispatcher received a phone call from an agitated crying Shayna Hubers, that claimed she had killed her boyfriend in self-defense. She said she had shot him.

Shayna had a long talk with the 911 dispatcher; she kept rambling about how scared Ryan had made her feel and why it was fair that he shot him. Shayna even told the dispatcher that Ryan was just injured after she shot him the first time but when he regained consciousness she shot him again twice. She said she figured he was going to die anyway.  It was a long awkward call.

When police arrived at Ryan’s condo at 9.00 pm, they found his body on the living room floor. Ryan was dead.

Ryan Poston was shot 6 times. One in the forehead, which investigators believe was the first shot.

Shayna Hubers was born in Lexington, Kentucky on April 8, 1991. Shayna Michelle Hubers spent the first 19 years of her life obsessed with school, not her boyfriend. Friends of hers described Hubers as a near “genius,” noting that she was always taking AP classes and getting As.

While in jail, on June 2018, Shayna married a transgender woman inmate named Unique Taylor and divorced her in June 2019.

Police officers took Shayna to the Highland Heights Police station; even when she immediately waived her Miranda rights and was given a lawyer, Shayna wanted to talk and talk and talk. She talked so much police officers had to switch shifts because they were getting so tired. Not only was she talking but she was also making strange noises, forcing herself to cry. The funny thing was that she would stop when she was left alone in the room. It was like she turned off a switch.

Shayna’s behavior during the police interrogation was weird. Officers didn’t know what to make of it. She began crying and telling them how abusive Ryan was to her and why it made complete sense for her to kill him. Shayna said that Ryan was throwing her around the room that night. He was telling her how much he hated everything about her. But there was no actual evidence to support a scenario of struggle in Ryan Poston’s apartment. She seemed to be in a manic state where she just couldn’t shut up or stay still. She had moments where she was laughing and other moments when she was singing; then she was back to ¨normal¨… just bizarre.

After three hours of playing Shayna’s game, law enforcement officers had had enough. They told Shayna she was going to be charged with murder, and to this, she just said, “what degree? ¨ She was then held on a five million dollar bond.

On the morning of October 13, Jay Poston received a phone call while riding his bike, but since he didn’t know the number, he didn’t answer. The number left a voice mail. Jay made a stop and listened to it. “Mr. Posting, we have a body here that we believe could be a member of your family.”

Due to her high bail, Shayna remained incarcerated until trial.

Shayna Hubers’s murder trial began on April 13, 2015. She entered a plea of not guilty. Her defense attorney said Shayna acted in self-defense and that she was the actual victim there. He said she had always been a victim of domestic violence.

The prosecution indicated that Shayna shot Ryan in cold blood after he told her he wanted to break up with her. They had a lot of evidence and witnesses to support that claim, including the thousands of messages Shayna sent Ryan weekly proving her obsessive behavior.

Shayna’s cellmate, Cecily Miller, testified of how Shayna liked to brag about killing Ryan and how she was going to plead insanity to stay out of jail. Shayna then would say she was too smart to play insanity because she had the same IQ as Albert Einstein. So instead, she was going to plead the wife battered syndrome and say that Ryan beat her. She said Shayna was a cold-blooded killer that showed no regret.

On April 23, 2015, after five hours of deliberation, the jury found Shayna Hubers guilty for the murder of Ryan Poston. The judge gave her 40-year-prison-sentence.

On August 26, 2016, Shayna was granted an appeal for her conviction. It was granted on the base that one of her jurors had a conviction for child support during her trial.

Shayna’s re-trial began on August 18, 2018. This time Shayna took the stand. During the trial, she was diagnosed with Borderline disorder.

On August 29, 2018, the jury once more took five hours to deliberate, and once again, they found Shayna Hubers guilty.