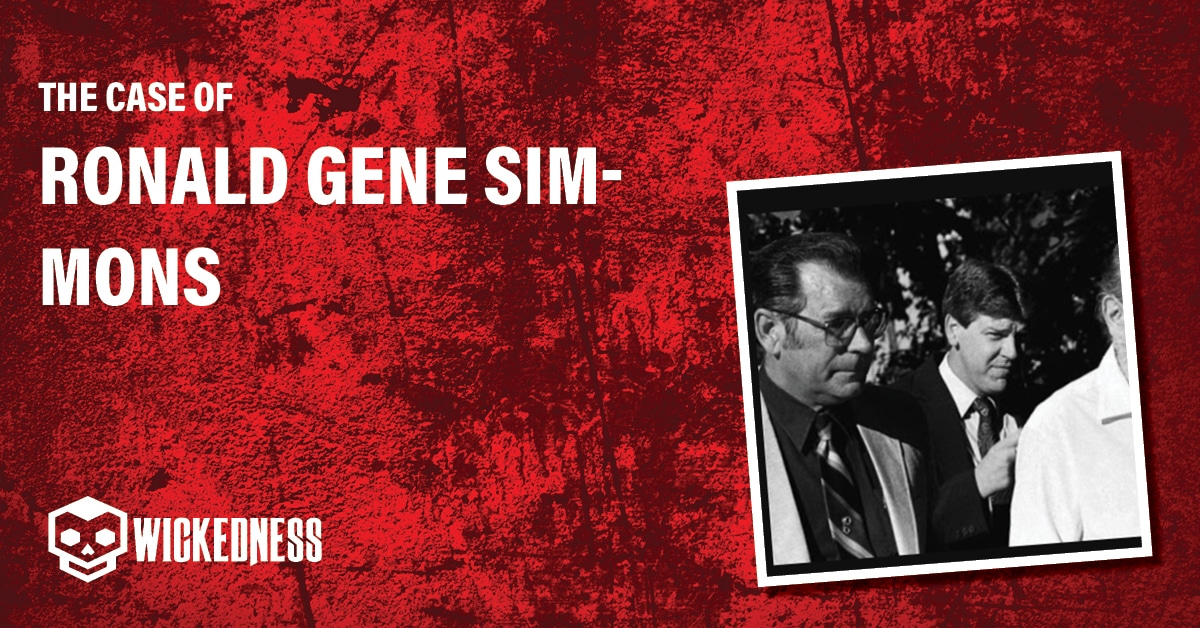 Ronald Gene Simmons Sr. was born in Chicago, Illinois, on July 15, 1940, to Loretta and William H. Simmons II. Soon, this young family was struck by a tragedy. On January 31, 1943, William died of a stroke, while Ronald was less than 3 years old. Loretta remarried within a year to William D. Griffen, a civil engineer for the U.S. Army Corps of Engineers.

Due to his stepfather’s work, Ronald and his family had to move several times in the following years, starting with Little Rock in Pulaski County. In 1957, Ronald dropped out of school and joined the US Navy, and started his career as a military serviceman. At first, he was stationed at Naval Station Bremerton in Washington. There, he met Bersabe Rebecca “Becky” Ulibarri, his future wife.

Ronald Gene Simmons and Bersabe Rebecca “Becky” Ulibarri got married in New Mexico on July 9, 1960. Becky adored Gene but their marriage was far from happy. The couple had seven children over the course of 18 years. In 1963, Ronald left the navy and joined the U.S. Air Force in 1965. During his 20-year-long career in the military, Ronald received several medals, including the Bronze Star Medal, the Republic of Vietnam Gallantry Cross, and the Airforce Ribbon for Excellent Marksmanship.

He retired from the military in 1979 with the rank of master sergeant. In 1981, Ronald Gene Simmons was investigated by Cloudcroft, New Mexico Department of Human Services because he allegedly fathered a child with his daughter Sheila, whom he had sexually abused her whole life. Due to these allegations, Ronald Gene decided to flee with his family in late 1981.

Ronald Gene Simmons started working low-paying jobs for the next 4 years. He worked in various positions, including an accounts receivable clerk at Woodline Motor Freight. However, he couldn’t keep a job for too long and was fired from some of those jobs after numerous reports of unprofessional behavior that included inappropriate sexual advances. On December 18, 1987, he quit his last job at a Sinclair Mini Mart.

On the morning of December 22, 1987, Ronald fatally shot his wife Rebecca and his oldest son Ronald Gene Simmons Jr. Then, he strangled his 3-year-old granddaughter Barbara. He dumped their bodies in the cesspit that was dug right beside the house.

Later that day, other Ronald’s children arrived home and he told them that he had presents for each one of them. He wanted to give his children their presents, but one at a time and in a separate room. First, he called his 17-year-old daughter Loretta into the room, where he strangled her and held her head under the water in a rain barrel. Three of his other children, Eddy, Marianne, and Becky were killed the same way.

On December 26, the remaining family members came to visit. At first, Ronald’s son Billy arrived with his wife Renata and their 20-month-old son, Trae. Ronald shot Billy and Renata, and then strangled and drowned their son.

Then, his daughter Sheila McNulty arrived with her husband Dennis McNulty, her 7-year-old Sylvia (fathered by Ronald through an incestuous relationship with Sheila), and their 21-month-old son Michael McNulty. As with the other family members, Ronald killed the adults by shooting them, and he killed the children by strangling and drowning them.

After he was done murdering his family, Ronald lined their bodies in neat rows in the lounge. He covered the bodies with coats, except Sheila’s body, which he covered with the best tablecloth he had. Also, he wrapped the bodies of Trae and Michael in plastic sheeting and left them in abandoned cars at the end of the lane.

After he murdered his whole family, Ronald Gene Simmons went to a local bar to have a drink. He returned to his home, where he spent the next day and a half drinking beer and watching TV. On December 28, early in the morning, Ronald went to Russelville, straight to the law firm where he previously worked.

When he walked into the law office, he killed the receptionist Kathy Kendrick, a young woman that declined his sexual advances. Then, he went to another company where he worked. It was an oil company office, and there, Ronald murdered his ex-co-worker Jim Chaffin and wounded the owner, Rusty Taylor.

However, this didn’t satisfy Ronald’s bloodthirst, so he drove to a convenience store where he also worked, where he shot and wounded two people. Finally, he went to the office of the Woodline Motor Freight Company where he worked as a receivable clerk, and there he shot Joyce Butts, the office manager. Then, he simply sat in the office and chatted with a secretary while waiting for the police. When the police arrived, he calmly handed out his gun and surrendered.

Initially, Ronald was arrested for his killing spree in Russelville and placed in a local detention center. It wasn’t until the police searched his home that it became clear how dangerous this man was. Ronald’s killing spree left 16 people dead, 14 of which were his own family members, and 4 people wounded.

Ronald Gene Simmons was first tried for the Russelville murders, and then for the murders of his family members. John Bynum was the prosecutor. On May 16, 1988, Ronald Gene Simmons was found guilty and convicted to death on 16 counts of capital murder. He didn’t even try to appeal his death sentence, and even stated that “To those who oppose the death penalty – in my particular case, anything short of death would be cruel and unusual punishment.”

While on death row, Simmons was harassed and threatened by other prisoners, so he had to be separated from them. They threatened Simmons because he refused to appeal his death sentence, and they believed that his decision would hinder their own efforts to appeal and avoid their death sentences, especially after another death row inmate, Jonas Whitmore tried to appeal his capital punishment.

On May 31, Arkansas governor (and later a President) Bill Clinton signed Simmons’ execution warrant. Simmons was executed on June 25, 1990, by lethal injection, in the Cummins Unit. The surviving members of his family refused to collect his body, so he had to be buried in the potter’s field.

What Happened To Ronald Gene Simmons?

Something snapped in Ronald Gene Simmons in December 1987 and he went into a murderous rage that left 14 members of his family dead, along with 2 of his coworkers that he killed, and 4 more people that were wounded. The exact motive for the murders was never determined, and he was sentenced to the death penalty by lethal injection.

What Happened To The Simmons’ Family Home?

Although the Simmons’ home continues to awaken the curiosity of true crime fans after the notorious family murders, it is now taken by other residents who wish to keep their privacy.

How Did Ronald Gene Simmons Treat His Family Before The Murders?

Ronald Gene Simmons led a bizarre family life. He was an abusive and controlling man. Apart from being abusive towards his wife Rebecca, he sexually abused his oldest daughter Sheila. He didn’t allow his family to have much contact with the outside world, so they didn’t have a telephone. Also, he was frequently checking and even censoring his wife Rebecca Simmons’ mail.