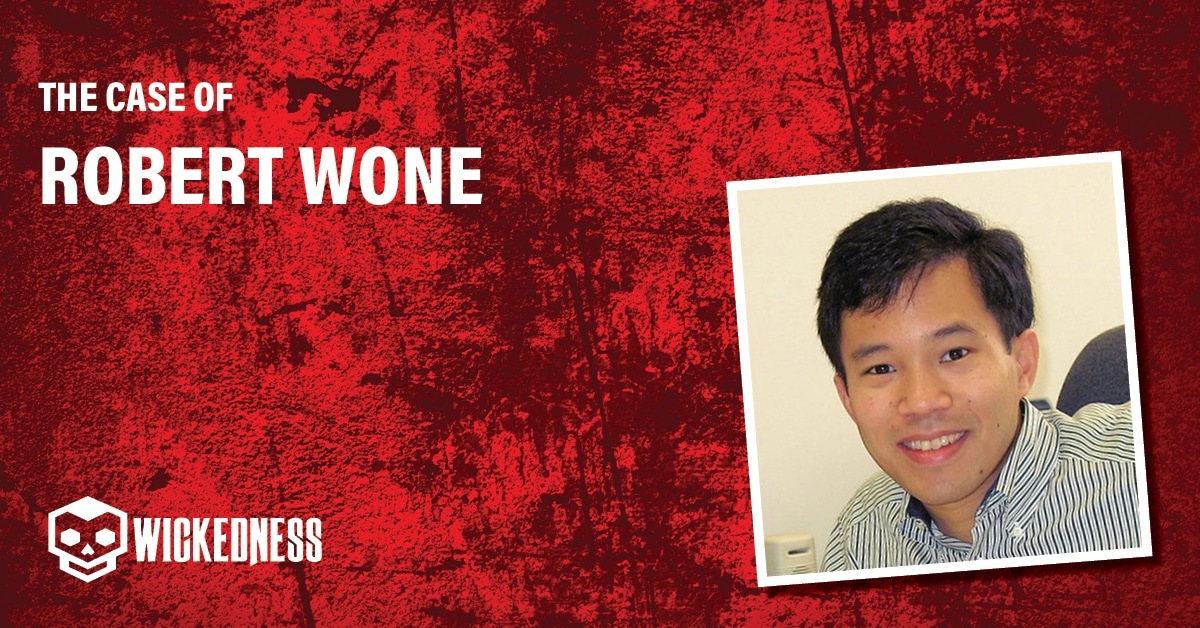 Robert E. Wone, age thirty-two at the time of his death, was an American lawyer who worked in downtown Washington DC. Wone lived a while away from his office in the suburban area of Oakton, Virginia, with his wife, Katherine Ellen Yu. The two had been married for about three years by the time he was murdered.

On the evening of August 2, 2006, Wone had been working late when he ultimately decided not to make the long commute back to his home in Oakton. He instead opted to stay with one of his friends from college, a man named Joseph Price. But little did he know, this would lead to his untimely demise.

He Would be Found Dead that Very Night…

At around midnight, only ninety minutes after Wone had entered his friend’s home, the police were called to the house by a man named Victor Zaborsky, Joseph Price’s domestic partner. He told the 911 operators that someone had broken into their home and stabbed someone inside.

Once the police arrived, they were met by the three residents of the home: Price, Zaborsky, and Dylan Ward. Dylan Ward was the third member of the polyamorous relationship that existed in the house. All three men were found in white bathrobes, looking like they had just gotten out of the shower.

The paramedics also arrived and found Robert Wone in the guest bedroom, murdered. There was a knife on the bedside table and no blood on or around the victim, including on the sheets beneath him. The whole crime scene was eerily clean.

Wone Was Stabbed to Death

Wone had a large stab wound in the middle of his chest. It was reported to be large enough to put your finger in. That made the fact that there was no blood around the wound very strange.

Wone had been wiped clean by someone. A paramedic on the scene said that it looked like whoever had stabbed Wone had showered him, redressed him, and then placed him on the bed. It was the only way to explain the cleanliness of the crime scene.

Wone had no obvious signs of struggle on his body, but some strange things were found during the autopsy. There were needle marks at several points on his body, including his neck, chest, foot, and hand. Furthermore, blood vessels in Wone’s eye had burst.

It also looked as if Wone had been getting ready for bed at the time of the murder because he had a mouth guard in his mouth at the time his body was found.

Neighbors reported that they had heard screams about twenty minutes before the police were called. These screams are assumed by most to have been Wone’s.

Police Suspected the Three Residents of The Home

The three main suspects were the men that were present in the home at the time of the murder, especially because of the odd discovery of the body. But they insisted that someone had broken into their home and murdered Wone. However, police found their calm behavior unusual.

Little is known about these three people’s personal lives. Other than their relationship with each other. These three men were part of a homosexual, three-way relationship, which was very taboo at the time. And many people believed that these men were unfairly suspected because of their lifestyle.

None of the men had a previous criminal record, and this fact helped support that theory.

But the Investigation Turned Up Some Interesting Details

Firstly, the police found some sex toys in the home that looked sadomasochistic. They were reported to look similar to medieval torture devices, and the original theory became that Wone had died in a sex game gone terribly wrong. There was just one issue. Wone was straight. Whatever happened had been against his will.

When they found the needle marks on his body, they assumed he had been drugged. But nothing showed up in his blood when it was tested. However, the burst blood vessels in Wone’s eye did raise suspicion as this is a common side effect of suffocation.

Police also explored the route that the killer would’ve had to have used to get to Wone if he was indeed a stranger who broke in. But they found that the cobwebs and dust in the route were completely undisturbed, making the house’s three men even more suspicious.

It Was a Nasty Fight in Court

The prosecutor who was trying to get the three men put away, Glen Kirschner, insisted that the three had tampered with the crime scene and were “acting in unison to protect the family.”

But although the suspicious nature of the crime scene did lead to some doubt, there were weaknesses in the prosecution’s case, such as the fact that little was known about the ninety-minute window of time between when Wone entered the house and when the police were called.

David Schertler, who was one of the defense attorneys on the case, said that the prosecution’s case was weak because it was all based on “assumptions, speculations, and innuendo.”

Then The Verdict Came In…

In the end, the three men were found not guilty but did end up paying an unknown amount of money to Katherine Wone, Wone’s widow, after a wrongful death lawsuit was charged.

Q: Were there any other suspects in the killing of Robert Eric Wone?

A: The prosecution briefly brought up Michael Price, Joseph’s brother, as a suspect, but there was no evidence.

Q: Where are the three suspects in the Robert Wone case now?

A: They are living very private lives and working normal jobs. They try their best to stay away from the press.

Q: What kind of knife was used in the killing of Robert Wone?

A: A kitchen knife was found on the nightstand, but police believed that this wasn’t the real knife used in the murder.

A: Robert Eric Wone decided to stay with college friend Joseph Price. He was found later that night dead with a stab wound to the chest.