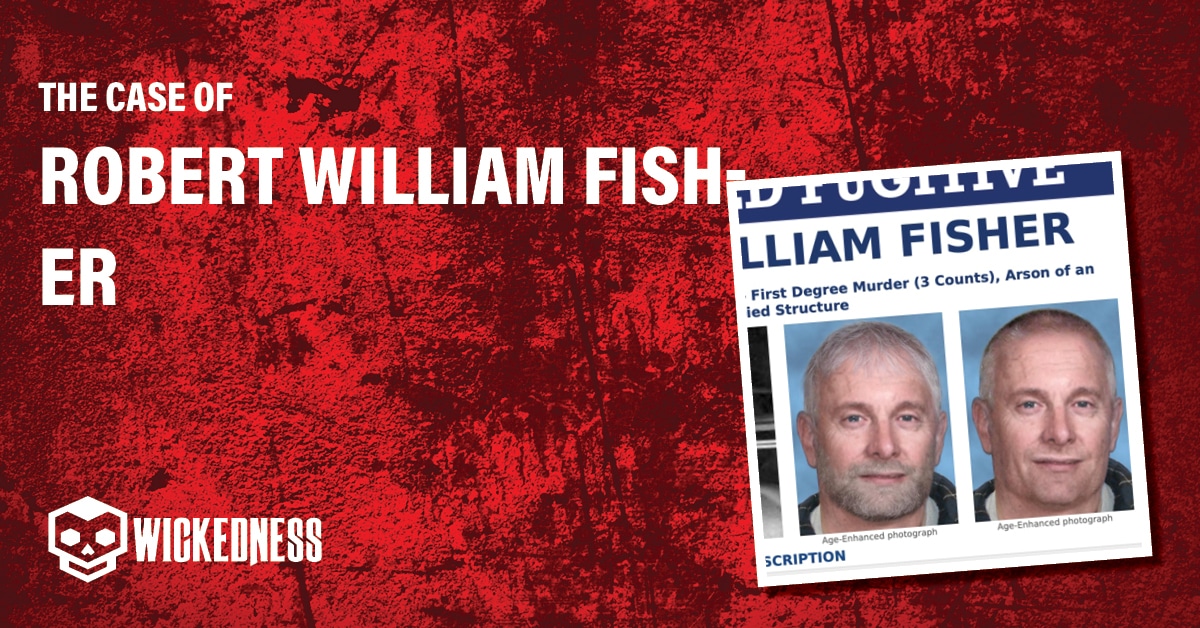 Robert William Fisher was born April 13, 1961 in Brooklyn New York, US. His father was William Fisher, a banker, and his mother was Jeanne Howell. He has two sisters that attended the same high school with him in Tusan, Arizona. His parents divorced in 1976 when Robert was only 15 years old. After the couple separated, Robert and his sister stayed with their father. According to friends and relatives, the divorce really affected him. It seemed like he always blamed his mother for it. Growing up when things weren’t looking bright for him, Robert would always say that his life would have been very different if his mother had not left the family.

Robert enlisted into the US Navy and attempted to become one of the Navy’s Seals but he was not successful at it. He didn’t make it. He was an outdoor’s man who had talent for hunting though. He also joined the firemen force but had to retire soon because of an injury in his back. Robert then moved with his family to Arizona and started working in the medical field. He was a surgical catheter technician and a respiratory therapist. At the time of the events, he was working as a surgical technician in Mayo Clinic.

Robert Fisher and Mary cooper got married in 1987. They had two kids, Bobby and Brittney. He was described as a control freak. He wanted to control everything about what his wife did. Robert wanted to control the way she talked, the way she dressed, the way she cleaned or arranged the house décor, everything. They had financial problems too and their intimate life wouldn’t be the best. But even when he was being an abusive person, he did his best to appear to be a perfect man for everybody else. He wanted to be seen as a good man, and some people were buying it. However, most knew he was a weird element.

The weeks before the incident, Robert had told his friends he was afraid his wife would find out about him being unfaithful to her with a prostitute, and that he was feeling suicidal because he wouldn’t be able to face divorce. He couldn’t live without his family ever so divorce wasn’t an option.

Before fire fighters arrived, the neighbors had been using garden hoses to try and keep the flames under control. The explosion was strong enough to collapse the front brick wall and rattle the frames of neighboring houses for one-half mile (800 m) in all directions.

The burned bodies of Mary and her two children, Bobby and Brittney Fisher, were found lying in bed in the burned-out remains. Investigators theorized that Fisher murdered his family because he felt threatened by Mary’s intention to divorce him, and did not want Brittney and Bobby to go through what he did as a child.

When looking deeper into what caused the fire, experts found that the gas line from the back of the house’s furnace had been pulled. The accumulating gas was later ignited. The theory was that Robert had left the gas line open and had later lit a candle, waiting for the gas to accumulate and descend to the flame hours after, giving him plenty of time to escape. As part of the theory, investigators believed the explosion was an attempt to; one, mess with possible evidence; and two, to make police believe he had died in the fire too.

When examining the victims’ bodies, police found that Mary Fisher was shot on the back of the head and her throat had been slashed. Britney and Bobby’s throats were slashed too. The cuts were from ear to ear and were so severe their heads were almost decapitated. The way it was described resembled that of when you are bleeding out an animal you have just hunted. Robert Fisher was an experienced hunter.

Police believed that the murders took place between 9:30 pm and 10:15 pm. At 10:43 pm, Fisher was spotted on an ATM camera, where he withdrew $280. Mary’s car was in the background. It is possible that Robert later returned to the house to commit the murders, but police believe that they had already taken place by then because he was using his wife’s car.

Robert Fisher was named as an official person of interest in the case on April 14, 2001, after the Arizona Deprtment of Public Safety released a statewide bulletin with orders to arrest him.

On April 20, police found Mary Fisher’s car, a Toyota 4 Runner, in Tonto National Forest. The family dog Blue was found outside the car hungry and agitated. Inside the vehicle, Police also found an Oakland Raiders hat identical to the one that Robert was seen wearing in the ATM footage. A disgusting finding near the passenger door was a pile of human excrement. The law enforcement agents immediately started a search in the area the car was found. It was near to an underground complex of caves that extended for miles beneath the surface. They were only able to search one out of many dozens of caves. The car, the hat and poo were the last physical evidence of Robert Fisher’s whereabouts.

After the news of finding the car was released, a couple reported seeing a man resembling Fisher walking along the nearby Young Road several days before the discovery of the car. According to them, when the woman saw him, she said to her husband, “That looks like Robert Fisher.” However, they waited until after the vehicle was found to report the tip. Lori Greenbeck, an acquaintance of the Fisher family, said that her husband had gone camping with Fisher in the area where the truck was found shortly before April 10. She said that her husband believed that Fisher was scouting the area. According to her, he was very familiar with the region.

On July 19, a state arrest warrant was issued in Phoenix, charging Fisher with three counts of first-degree murder and one count of arson. He was declared a fugitive, and the United States District Court issued a federal arrest warrant for the District of Arizona, charging him with unlawful flight to avoid prosecution. On June 29, 2002, Fisher was named by the Federal Bureau of Investigation (FBI) as the 475th fugitive to be placed on its Ten Most Wanted list. He was also on America’s Most Wanted‘s “Dirty Dozen”, the list of its most notorious fugitives, and was profiled on The Hunt with John Walsh. The FBI offers a reward of up to $100,000 for information leading to Fisher’s capture. By April 2003, the FBI had received “hundreds and hundreds of leads.” However, all reported sightings of Fisher have been either inconclusive or false.

In February 2004, a man that pretty much looked exactly like Robert Fisher was arrested in Vancouver, Canada, by the Royal Canadian Mounted Police. The man had a missing tooth where Robert had a gold bicuspid, as well as a surgical scar on his back, as he had. Police had started feeling lucky until they took his fingerprints, they did not match! The man was held by Canadian police for approximately one week until a relative correctly identified him. Responding to speculation that his fingerprints had been altered, Scottsdale Detective John Kirkham said that there was no scarring on them to suggest this. The man’s identity was not released.

In April 2016, fifteen years after the incident, FBI officials and Scottsdale police displayed new age-enhanced photos of Fisher during a news conference on the fifteenth anniversary of the murders.

On November 3, 2021, Fisher was removed from the FBI Top 10 Most Wanted List.  “Because the extensive publicity Fisher’s case received during its nearly 20 years on the list has not resulted in his successful location and/or capture, the case no longer fulfills that requirement,” the FBI said.

There are three main theories about what happened to Robert Fisher:

Minority of people believe on a totally different thing and it’s that maybe Robert Fisher didn’t kill his family. This could be true if you think of him taking the dog with him. Why would he take the dog with him after killing his whole family? Why didn’t he just kill the dog aswell? This theory says that maybe he went back home found his family dead and thought that everybody would blame him for it so his solution was to initiate the fire, take the dog and run. He would eventually feel forced to leave Blue behind because it wasn’t as easy to hide with him in the series of caves as he thought it would be. But who really knows…

Two decades and many false sightings later, the Scottsdale police detective in charge of the case, John Heinzelman, still receives two to three tips a week about Robert Fisher, or about 100 leads a year.