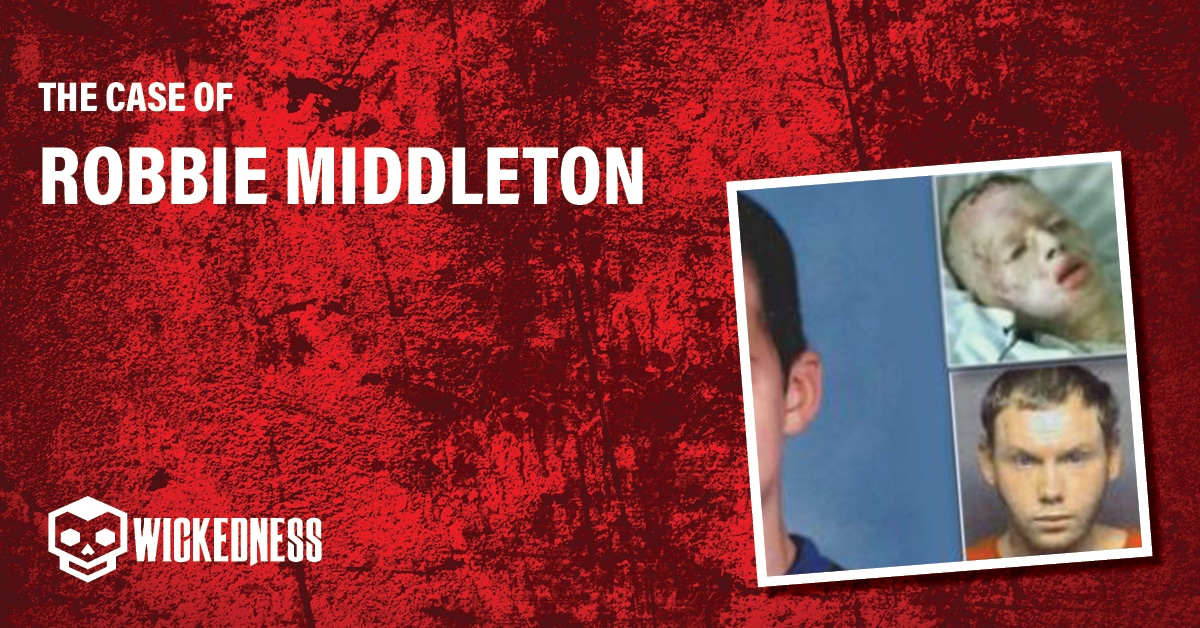 Who was Robbie Middleton?

Robbie Middleton was born June 28 1990 to his parents, Bobby and Colleen Middleton. He was the youngest of three children and the family lived in Splendora, Texas. The Middletons were religious and this played a large part in how they raised their family.

On June 28 1998, it was Robbie’s 8th birthday. His mother Colleen said that Robbie loved his birthdays and he’d woken up that morning, filled with excitement. After opening his presents, Robbie headed out and used some of his birthday money to purchase some fireworks. He’d received a tent as one of his presents and his mother had said that he could have a sleepover in the back yard with one of his friends.

After buying the fireworks, Robbie planned to go to his friend’s house to bring him back to his for the sleepover. The route he took went through the woods. It was here that the horrific attack on Robbie took place.

Colleen Middleton discovered the unrecognizable body of her son as he managed to crawl his way from the woods to his home. He was clinging to life and he’d suffered third-degree burns to 99% of his body.

Robbie did survive the attack but as a result, he had to undergo over 150 surgeries and skin grafts. Unfortunately, this caused Robbie to develop a rare form of skin cancer and he died in 2011. A coroner ruled his death a homocide as it could be directly linked to the attack.

As Robbie walked through the woods to his friend’s house, he was brutally attacked. Before his death, Robbie said that the last thing he remembers about the attack is 13-year old Don Wilburn Collins grabbing his shoulder and throwing gasoline in his face.

Don tied Robbie to a tree before dousing the rest of his body in gasoline and setting him alight. The only reason Robbie was able to escape was because the rope holding him to the tree snapped from the heat. Robbie crawled from the woods to a main road near his house and this is where Colleen discovered her son.

Robbie was rushed to hospital and his parents were told that it was unlikely that he would survive the attack. The eight-year-old had suffered extensive burns to 99% of his body with only the soles of his feet being spared.

Shortly after the attack, Robbie named 13-year-old Donald Collins as the one who had done this to him. Police arrested Collins and he did spend time in a juvenile detention center but lack of evidence meant he had to be released.

In the years that followed, Robbie had to undergo over 150 surgeries, skin grafts and physical therapy as a result of the attack. Throughout, Robbie maintained a positive attitude, telling people that he wanted to leave the past in the past. He didn’t see himself as a burn victim.

Unfortunately, in 2011, Robbie was diagnosed with a rare form of skin cancer. It was terminal. Shortly before his death, Robbie recorded a 27-minute video testimony where he again named Donald Collins as his attacker.

In this video testimony, Robbie also explained the reason for the attack. He claimed that three weeks prior, Donald had raped him and threatened to burn him if he ever said anything.

At the age of 20, Robbie Middleton died from skin cancer. The medical examiners ruled his cause of death as a homicide because this type of skin cancer could be directly linked to the attack.

Not much is known about Donald Collins’ early life. He was 13 at the time of the attack on Robbie Middleton which means he was born in 1985 but that’s really all the information that’s available.

13-year-old Don Collins lived near to the Middleton home and he was already a known local sex predator. Colleen had warned Robbie that if he was outside playing and he saw Donald, Robbie was to return home immediately.

In 2001, Donald was 16 years old and he was serving time in prison for sexually assaulting another eight-year-old boy. He also failed to register as a sex offender so this earned him jail time too and he was released on September 5 2011.

Even though Robbie Middleton had named his attacker as 13-year-old Donald Collins, there wasn’t enough evidence linking him to the attack. Galveston County law enforcement had arrested Collins and placed him in a juvenile detention facility but he had to be released because of lack of physical evidence.

In 2011, when Robbie knew he was dying, he made a 27-minute video deposition about the attack. He once again named Donald Collins as the one who had tied him to that tree and set him alight. The motive was that Collins had raped him a few weeks before the incident and that the attack was a way to ensure Robbie wouldn’t speak about the rape.

During this recording, Robbie also claimed that he heard an adult’s voice speaking to Donald as Robbie was on fire. Many people also believed that another adult had been involved but this hasn’t been proven.

But prosecutors argued that the murder didn’t happen until 2011 which is when Robbie had died. Donald Collins was 26 when Robbie Middleton died so in the eyes of the law, he could be tried as an adult.

During the trial, several witnesses came forward and claimed that Donald had told them that he was responsible for the attack on Robbie. The 8-year-old boy that he had sexually assaulted three years after the attack also testified.

A woman by the name of Heather Marie White, who’s mother was married to Donald’s cousin, testified that Donald had confided in her that he and Rex had hurt Robbie. Rex was Donald’s uncle. This could explain the adult voice that Robbie had heard but Rex’s involvement was never proven.

Colleen also spoke and claimed that in his final weeks, Robbie was terrified that he’d go to hell. His reason for this was that he’d had sex before marriage and even though she told him many times that he was the “best person she knows”, Robbie still had that fear.

On February 9 2015, a jury found Donald Collins guilty of capital murder and sentenced him to the maximum sentence available which was 40 years.

His defense appealed because he was tried as an adult but this appeal was denied on March 29 2017.

After the trial, the Middleton family filed a civil lawsuit and were awarded $150 billion compensation. This is the biggest compensation amount ever rewarded in a court, even above the Florida tobacco verdict from 2000 of $145 billion which was overturned.

Thirteen-year-old Don Collins set eight-year-old Robbie Middleton on fire. This was in an attempt to keep the little boy quiet about Donald raping him a couple of weeks before. It was Robbie’s video testimony that first named Donald Collins as his attacker.

What happened to Don Collins?

Don Collins was sentenced to 40 years in prison after Robbie died in 2011. He showed no remorse as his sentence was delivered to him.