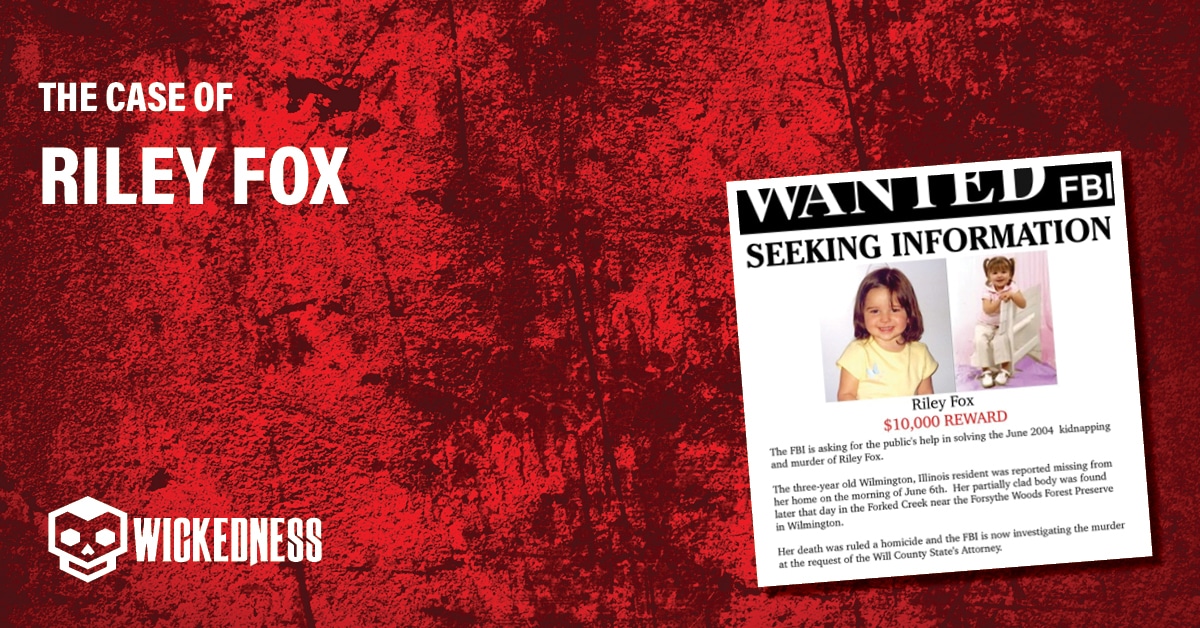 Who was Riley Fox?

Riley Ann Fox was born on March 31st 2001. Described as beautiful and rambunctious, the three-year-old loved Dora the Explorer and she was so full of life. She lived in Wilmington, Illinois with her parents, Kevin and Melissa Fox and her older brother Tyler. The family did everything together and Riley wasn’t known for wandering off without her family. It wasn’t in her nature.

On June 5th, Melissa Fox left to take part in a breast cancer walk in Chicago. It was one of the first times that she’d been away from her children but as her father had passed from cancer, she wanted to do this in his memory.

That night, Kevin Fox had planned to attend a concert with some of his friends and one of Melissa’s brothers. Melissa’s mom, Sandy Rossi, minded the kids until Kevin came to pick them up at around 1am. When they arrived home, they were too tired to make up their beds so Kevin set up makeshift beds in the living room. He then couldn’t sleep so he watched TV until around 2am and then he went to bed.

The plan for the next morning was for Kevin, Tyler and Riley to drive to Chicago so they could meet Melissa at the finish line. But these plans were abandoned when Kevin was woken by a worried Tyler, saying Riley was missing.

Three-year-old Riley Fox was found face down in a creek in Forsyth Woods County Park which was about four miles from the family home. Wearing just a t-shirt, she had been bound and gagged before she was sexually assaulted. Autopsy reports claim she died as a result of drowning.

Riley Fox had spent the night at her grandmother’s house with her brother. Her mom, Melissa, was attending a breast cancer walk in memory of her dad and Kevin, Riley’s dad, was at a concert with some friends.

Between midnight and 1am, Kevin arrived at Sandy’s house to pick up the two children. When they arrived home, he realized that neither of their beds had clean bedding on them. He was too tired to make up the beds so he put the kids to bed in the living room. Riley was on the sofa under a blanket and Tyler was on the living room chair.

Kevin couldn’t sleep so he stayed up watching TV until 2am when he eventually fell asleep.

That same night, Scott Eby was on parole when he broke into a house on the same street as the Fox’s home. Eby has later admitted that he was high on cocaine as well as drunk. He cut the screen on their door and stole $40 while the homeowners slept.

Scott then walked across the street and entered the Fox home. He was able to gain entry through the back door because the lock was broken. Once inside, he looked around for something to steal but he became fixated on Riley who was asleep in the living room.

He left the house and got into his truck which he backed onto the driveway. Eby then went back inside and covered Riley’s mouth and put her in the trunk of his car. He drove to a nearby park, Forsythe Woods, where he perfomed a sexual assault on Riley in a male restroom. Scott was wearing a bandana as a mask but when he saw that Riley was looking directly at him, he realized that his mask had slipped off. This was the moment he knew he had to kill her.

Eby bound her hands and decided to drown her in the creek that ran through the park. Once he knew she was dead, he threw his trainers into the creek and left the scene. He also claims to have discared Riley’s underwear and pants in a nearby trash can but these were never recovered.

Who is Scott Eby?

Scott Wayne Eby was born on July 22nd 1971. He’s said that he had a relatively normal childhood with decent parents who taught him about respect and courtesy. Scott said in his confession letter:

“My parents didn’t raise a monster, I became one over the years and it’s no one’s fault but my own!!”

In 2009, five years after the murder, the FBI decided to reinvestigate the case and treat it as if it had just happened to find the real killer. They received a tip from one of Scott Eby’s ex-girlfriends. She claimed that months after the murder, they were stood in Riley’s memorial garden and a conversation about the 3-year-old’s death started. The ex-girlfriend said how she couldn’t believe anyone could do that to such a sweet girl. Scott’s response sent shivers down her spine. She said that he replied “oh, that was such a shame wasn’t it?” in such a cold response. It stuck with her for years and when the FBI came to her house, she gave them his name.

The FBI decided to investigate Eby who was serving a 14 year sentence for sexually assaulting a family member. When Scott realized the FBI were considering him a suspect in the Riley Fox murder, he wrote a 10 page confession letter and tried to take his own life. This was the third unsuccessful attempt since he’d murdered Riley.

This confession letter, alongside the trainers he’d thrown into the creek with the letters “EBY” written inside them and DNA evidence found on Riley was enough for FBI agents to charge him.

From the beginning of the investigation, the police suspected Kevin Fox of the murder. They appeared supportive of the family, even attending Riley’s funeral, but they were there to watch Kevin.

In June 2004, the Fox family agreed to allow Tyler to be questioned by police. For over an hour, Tyler was aggressively questioned at the police station and he became so upset that he couldn’t catch his breath through his tears. Police claimed that once he was at home, Tyler offered up more information about his father. Tyler said that Kevin took Riley somewhere that night but couldn’t give them in-depth detail.

By October, Kevin Fox was the prime suspect. One day, after he had finished work, officers asked him to go to the police station with them to answer some questions. Kevin was subjected to a 14-hour interview during which, he was told that if he admitted to involuntary manslaughter, he could go home on bond and he’d only spend a few years in prison.

Kevin Fox then gave a 20 minute confession, claiming that he was responsible for the death of his daughter.

He claimed that he’d hit Riley in the head accidentally and he thought she was dead. He took her lifeless body to Forsythe Woods where he put his finger inside her to look like she’d been assaulted and then left her in the creek where she’d drowned.

Kevin wasn’t offered bond like the police had claimed and he was taken straight to Will County Adult Detention Center where he was facing a first-degree murder charge and the possibility of the death penalty.

The Fox family hired Kathleen Zellner, a top defense lawyer who was famous for exonerating innocent men, as part of their legal team. Kevin claimed that the police had coerced him into a confession and he was innocent. At his bond hearing, Kevin’s bond was set at $25 million and he spend eight months in prison awaiting trial.

Meanwhile, Zellner was focused on clearing Kevin. She reexamined all of the evidence and she discovered that the DNA evidence found on Riley was never tested. Kathleen immediately sent it to the FBI crime labs to be tested, only to be told there was a backlog.

When the results finally came back, the DNA was not a match for Kevin Fox. He was released from prison and was awarded $15 million, which was reduced to $8 million, as compensation for his false imprisonment.

After the FBI received the Scott Eby tip, they went to speak to him in jail. Initially, agents didn’t think he had anything to do with the case but they took a DNA sample anyway. It was at this point that Scott wrote his confession letter and attempted suicide.

Scott Eby’s sample and the DNA evidence found on Riley Fox was a match.

Scott Eby pleaded guilty so there was no trial.

On November 10th 2010, Scott Wayne Eby was sentenced to life in prison without the possibility of parole.

Are Riley Fox’s parents still together?

After the murder of Riley, Kevin and Melissa went on to have another baby who happened to be a girl. However, the tragedy of what happened to Riley and ultimately Kevin was too much for the couple and they divorced. They have both since remarried.

Where is Riley Fox buried?