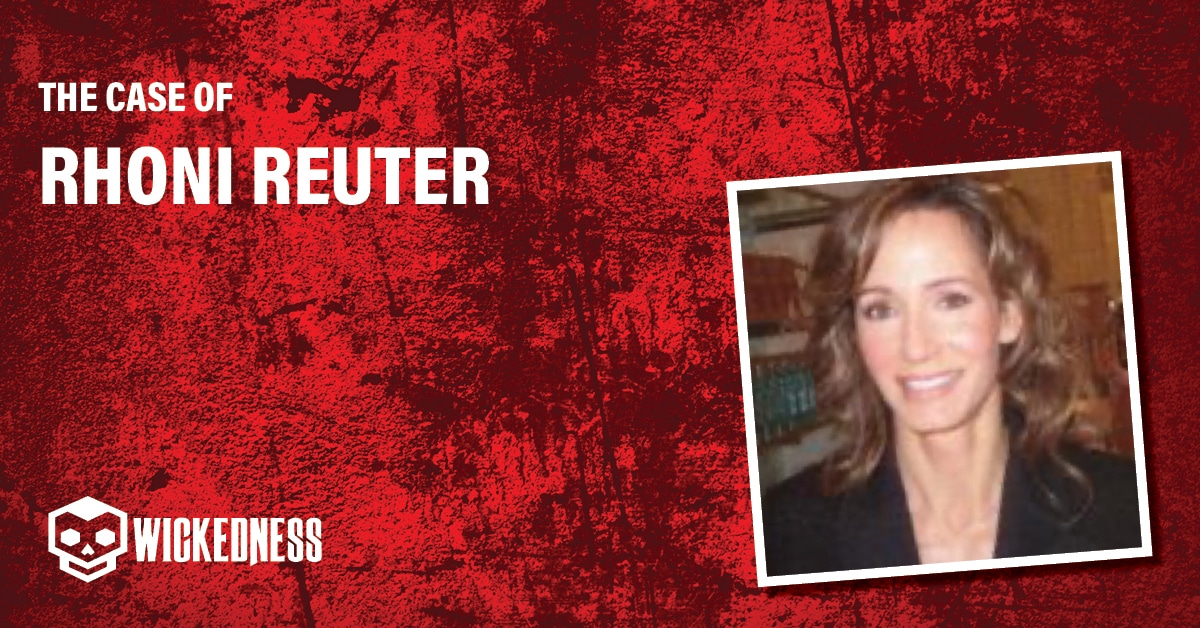 Rhoni Reuter, a 42-year-old pregnant woman, was killed in her apartment on October 4, 2007, in Deerfield, Illinois (a suburb of Chicago.) One of her neighbors called 911, claiming she heard several loud banging noises and screaming. When the police arrived, they found Rhoni dead on her kitchen floor. She had been shot seven times; a gunshot wound to the back of her head was what ultimately killed her. Two shots were aimed at Rhoni’s abdomen, killing her unborn baby. She had also been shot several times in the arms. Pathologists believed she was trying to protect her child. At the time of her death, she was seven months pregnant. Police found 9mm casings and a few unfired bullets near her body. Eyewitnesses told the police that they had seen a small African American wearing a wig fleeing the scene in a black Volkswagen.

With murder cases inside the victim’s home, authorities first look at those closest to the victim. Also, since there was no sign of forced entry, the police thought Rhoni might have known her killer. They believed it was a targeted attack since the shooter had specifically aimed at her abdomen.

Rhoni had been in a relationship with Shaun Gayle, a retired pro football player for the Chicago Bears, for 17 years, and he was the father of Rhoni’s child. After seeing photos of Gayle in her apartment, the police viewed him as a suspect. When investigators questioned Shaun, he told them that he had slept in that day, then worked out with his trainer. At 9:00 AM, he had an appointment for a haircut at a place that was 10 minutes from Rhoni’s apartment. However, there was no indication that Gayle was involved. He appeared to be devastated about Rhoni and their baby, and he seemed to be looking forward to fatherhood. The police even found a book of baby names at his home. He also didn’t match the description of the person seen leaving Rhoni’s apartment complex that morning. Gayle was taller and physically larger than the person depicted.

Authorities also asked Gayle if he could think of anyone who might have been responsible. Gayle told the officers about the anonymous, threatening letters his friends and family had received. The letter stated that Gayle had multiple sexual partners and listed the names and contact information of 16 other women. The police had found one of the letters in Rhoni’s purse when they searched her apartment. Gayle told authorities that Rhoni knew about the other women. When asked who he thought could be sending the letters, Gayle told them about Monika Kurowska, a fitness model he’d been involved with a year before Rhoni’s death. Shaun told the police that she was violent and had been stalking him ever since they broke up. He even had a restraining order against her. However, Monika had an alibi. She was with a client that morning, so the police moved on to other suspects.

The next suspect was Marni Yang, a divorced mother of 3 who was also in a sexual relationship with Shaun Gayle. She had a business relationship with Gayle as his Real Estate Agent, but eventually, it turned sexual. Family and friends told the police that Yang was obsessed with Shaun. Even though she was aware he was seeing other women, she still referred to him as her boyfriend. When searching her home, authorities discovered that Yang had been stalking Gayle online and hacked Rhoni’s computer. They also found labels with the names and mailing addresses of all those who had received the anonymous letters and similarly typed letters. They also discovered a smashed hard drive and bank statements thrown in the trash. The statements showed Yang had run background checks on all the women involved with Gayle.

Further investigation revealed that Yang owned several guns. One was a 9mm Beretta. Yang’s bank statements also showed that she had purchased a book on making a silencer and all the supplies needed for one from Home Depot. Police believed that a silencer would explain why neighbors reported hearing loud bangs and not gunshots, also why some of the bullets located at the scene were still intact. Someone inexperienced could have put the silencer together incorrectly.

Prosecutors didn’t have a solid piece of evidence on Yang until her friend of 20 years, Christi Paschen, eventually came forward and agreed to be a witness. According to Paschen, after Gayle told Yang he was going to be a father, she said she was going to kill him but changed her mind and decided to kill his pregnant girlfriend instead.

One night Yang invited Paschen to dinner, and she agreed to wear a wire and record their conversation. The Court heard the recording as Yang gave a highly detailed account of the murder, including that she wore a wig and dark makeup and had rented a black car. She also told Paschen that she had stolen Rhoni’s medical alert bracelet. After dinner, Yang drove around with Paschen and disposed of various items, including gun grips, a wig, and clothes. Based on Paschen’s information, the police located the medical bracelet. It was identified as Rhoni’s.

Police also discovered that Yang had rented a car on the day Rhoni was killed, a black Volkswagen. The odometer showed that Yang had driven 40 miles, the distance from the rental place to Yang’s home, Rhoni’s apartment, and back to the rental company.

After a lengthy trial, on March 15, 2011, Marni Yang was charged with premeditated first-degree murder and the intentional homicide of an unborn child. She was sentenced to life in prison without the possibility of parole.

Yang claims that she is innocent and knew she was being recorded that day and made the confession up. However, the details in her account matched those of the crime scene. A wrongful conviction plea was filed, and in 2019, a judge allowed the petition to move forward. Yang’s attorney, Jed Stone, says she fabricated the story because she thought her son would be implicated in Rhoni’s murder. He argued that there was no physical evidence against Yang, and it was all speculation. The Defense Team questioned the credibility of Christy Paschen as a witness, as she was a self-proclaimed psychic. She also claimed the military recruited her and then had her memory erased. A detective testified for the Defense and said there are no records of her service in the military. They also told the Jury that a fingerprint had been found on Rhoni’s doorknob that did not belong to Yang. They claimed the police didn’t look into other suspects and instead focused on convicting Yang and that the evidence presented at the trial no longer stands. They claim the vehicle seen in the surveillance tape from Rhoni’s apartment complex was not a Volkswagen. Also, a man had confessed to stealing Yang’s gun, the murder weapon, prior to the killing and that the DNA of an unidentified male was found on the bullets left at the scene. The Defense attorneys tried to request evidence against Shaun Gayle to be allowed at the trial based on his and Rhoni’s previous pregnancies ending in abortion; this information was not accepted. They also argue that only someone taller than Yang could have fired the shots at Rhoni based on the angle of the bullet wounds. This matter is still ongoing, but Yang and her Defense Team continue to try for a new potential trial in court.

Did Marni Yang get an appeal?

In 2019 a judge allowed her wrongful conviction plea to move forward. As of February 2022, she has not been granted a new trial.

In 2007 Marni Yang was found guilty of Rhoni Reuter and her unborn child’s murder. She claims she is innocent. Yang and her attorney are still trying for a new trial based on the lack of scientific evidence.