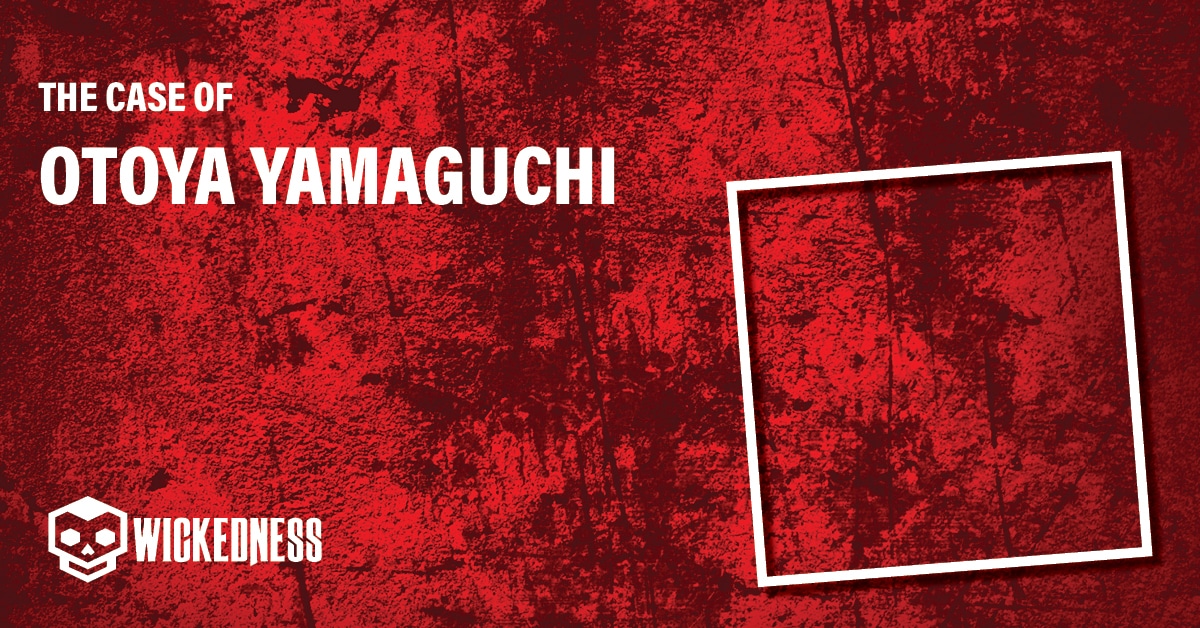 Committed suicide by hanging in prison on November 2, 1960

Who is Otoya Yamaguchi?

Otoya Yamaguchi was born on Febuary 22, 1943 in Tokyo. He was the second son of father Yamaguchi Shinpei, a high-ranking officer in the Japan Self-Defense Forces. At the age of 16, Otoya joined the prominent right-wing ultranationalist Bin Akao’s Greater Japan Patriotic Party. During the Anpo protests in 1959 and 1960, Otoya was arrested and released ten times for participating in a number of right-wing counter-protests. The group Otoya was a part of wanted to eliminate Western influence and restore Japan’s traditional culture.

The Public Assassination of Inejiro Asanuma

On October 12, 1960, Otoya was one of 2,500 spectators at a televised election debate held in Hibiya Public Hall in Hibiya Park in the center of Tokyo. The debate featured Suehiro Nishio of the Democratic Socialist Party, Inejiro Asanuma of the Japan Socialist Party, and Hayato Ikeda of the Liberal Democratic Party. Inejiro being the second to speak, took the stage at 3.00 pm.

At 3.05 pm, in front of a large crowd, Otoya Yamaguchi rushed onto the stage and made a deep thrust into Injerio’s left abdomen with a traditional 33-centimeter samurai sword that he had stolen from his father. Otoya then immediately attempted to stab Inejiro for a second time but was swarmed and detained by several bystanders. Unfortunately, Inejiro Asanuma died within minutes from internal bleeding.

Inejiro Asanuma was born on December 27, 1898, on the island of Miyake-Jima, a remote volcanic island that is part of Tokyo. His mother died during his birth, and his father later died of cancer at the age of 42, leaving Inejrio an orphan. Inejrio graduated from University in 1923 and became a Japanese politician. Inejrio was the leader of the Japan Socialist Party and a forceful advocate for socialism in post-war Japan.

On October 12, 1960, following the public assassination, Otoya was arrested and held in a detention facility awaiting his trial. During his imprisonment, Otoya remained calm and composed. He gave extensive testimony to the police officers and informed them that he had acted alone and without any direction from others.

But Then Otoya Yamaguchi Committed Suicide

On November 2, 1960, less than three weeks after the assassination, Otoya mixed a small amount of toothpaste with water. Then, using the paste, he wrote on his jail cell wall, ” Long live the Emperor” and ” Would that I had seven lives to give for my county.” This was in reference to the last words of 14th-century samurai Kusunoki Masashige. Otoya Yamaguchi then knotted strips of his bedsheet into a makeshift rope and used it to hang himself from a light fixture.

Right-wing groups celebrate Otoya as a martyr. His parents were given a burial coat, kimono, and belt, and they performed a memorial service for him. His ashes were interred. Since then, on the 2nd of November each year, right-wing groups have held an annual commemoration of his death.

Otoya Yamaguchi’s crime received massive publicity and inspired a string of copycat crimes making political figures the targets of assassination plots for the next few years.

One of the attacks inspired by Otoya’s assassination of Inejiro Asanuma was the Shimanaka Incident. On February 1, 1961, another 17-year-old rightist named Kazutaka Komori attempted to assassinate Hoji Shimanaka, the president of Chuo Koron magazine. Kazutaka broke into Hoji’s home that evening, but Hoji was not home. Despite Hoji not being there, Kazutaka still drew a knife and stabbed Hoji’s wife, leaving her severely wounded. He then stabbed and murdered his 50-year-old housekeeper, Kane Maruyama, when she tried to wrestle the knife away. Kazutaka then fled the scene. The following morning Kazutaka Komori turned himself into the police and was sentenced to 15 years in prison after being tried as an adult.

Q. What happened to Inerji Asanuma?

A. On October 12, 1960, Inerji Asanuma was speaking in a televised political debate in Tokyo. During the debate, he was assassinated with a wakizashi, a traditional short sword by ultranationalist Otoya Yamaguchi. His death was violent and witnessed by many in graphic detail on national television.

Q. Was a book written based on Otoya Yamaguchi?

A. Kenzaburo Oe, a Nobel Prize-winning author, based his 1961 novel “Seventeen” on Otoya Yamaguchi.

A. After being arrested, Otoya Yamaguchi committed suicide while he was held in a detention facility. He is considered a hero and a martyr to the Japanese far-right. The group holds annual commemorations in his honor still to this day.

Q. What happened to Otoya Yamaguchi?

A. On November 2, 1960, after being arrested for the murder of Inerji Asanuma, Otoya committed suicide. First, he mixed a small amount of toothpaste with water. Then using the paste, he wrote on his jail cell wall, ” Long live the Emperor” and ” Would that I had seven lives to give for my county.” This was in reference to the last words of 14th-century samurai Kusunoki Masashige. Otoya Yamaguchi then knotted strips of his bedsheet into a makeshift rope and used it to hang himself from a light fixture.