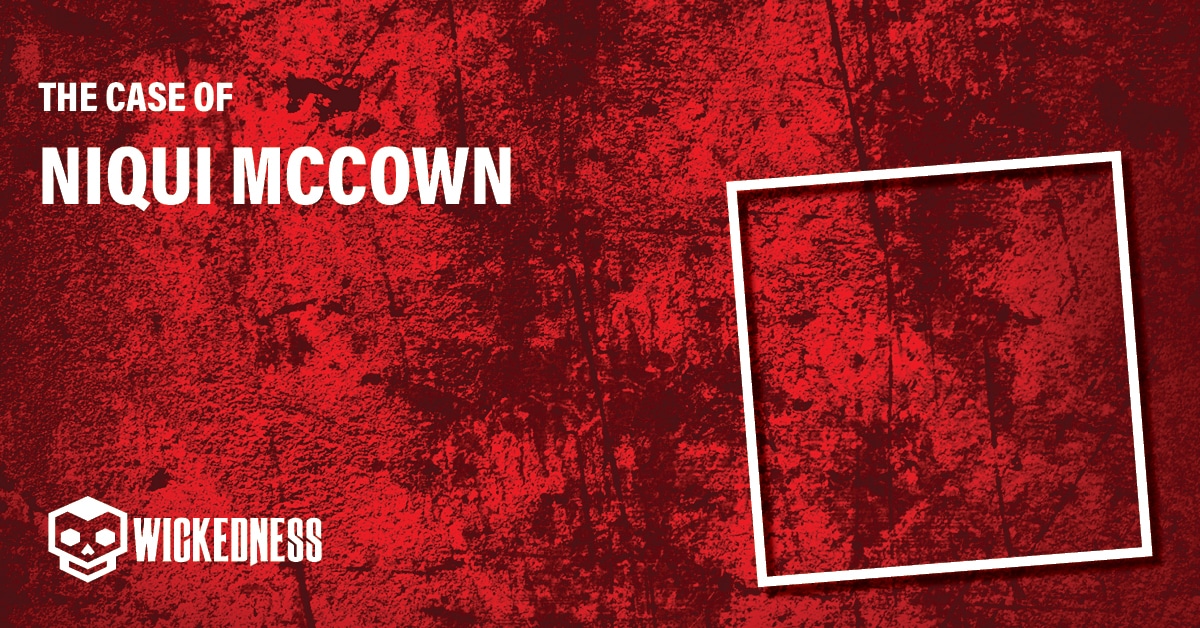 Niqui McCown was born Marilyn Renee Nicole McCown on January 6, 1973. She is nicknamed Niqui. Niqui was from a loving family and had nine siblings. At the age of 19, Niqui had a baby girl named Payton.

Niqui was 28 years old and living in Richmond, Indiana, at the time of her disappearance. She worked at the Montgomery Education and Pre-Release Center in Dayton, Ohio. A job she started in 1994 as a prison security guard before working her way up and becoming a head accountant. Niqui was also partaking in criminal justice courses and wanted to do something in law enforcement.

At the time of her disappearance, Niqui was only three weeks away from getting married to her finance, Robert Webster, nicknamed Bobby. Niqui and Bobby had dated in high school but separated. However, the pair eventually rekindled in 1998 when Bobby moved back from California.

The Disappearance of Niqui McCowen

On July 22, 2001, just three weeks before, Niqui was to marry her fiance, Bobby. She arrived at her mother’s house upset. She told her mother there was an incident at a laundromat where two men harassed her and wouldn’t leave her alone. She said she was afraid to go back there and get her laundry, but she eventually left her mother’s house. Niqui McCown has not been seen or heard from since.

The couple had spent the morning together at church and then had separated to run errands in preparation for their upcoming wedding. Bobby had me with his best man at a local tuxedo shop.

Bobby Webster returned home at around 4.30 pm, and Niqui wasn’t there, but he didn’t become concerned about this until she still hadn’t made it home at 7 pm. At 10.30 pm, Niqui still wasn’t home, and no one could get in contact with her. Her purse and her ID were at home.

The next day on July 23, at 8 am, Niqui was reported missing by her family.

On November 3, 2001, 28-year-old Niqui McCown’s car was found abandoned at Medows at Catalpa apartments in Dayton, Ohio. Her folded laundry was found inside the vehicle. The car was sent to the state crime lab for testing, but investigators found nothing inside the car: no blood, no fingerprints, and no DNA evidence. There was no physical evidence.

Niqui’s fiance Robert Webster was named a suspect in the case after he did some suspicious things just days after Niqui disappeared. Rather than postponing the wedding, Bobby canceled it and tried to return his wedding ring. Bobby Webster also called Sinclair Community College and asked for Niqui’s unused tuition back. He became upset when they informed him that her work was actually paying for her classes. Bobby said that he did these things to focus on finding Niqui and to buy a cell phone because he didn’t have one.

Investigators had Robert Webster take a polygraph test which he failed. When asked, “Were you responsible for Niqui’s disappearance,” the police officer said the needle jumped off the page.” However, despite this, Robert Webster was dropped as a suspect.

The two men who had harassed Niqui in the laundromat were also considered possible suspects. However, they have never been identified or located. Niqui’s laundry was found in her car, suggesting she had left the laundromat safely. Surveillance footage from across the street also shows her leaving unharmed.

Niqui’s car was found abandoned at the apartment complex where her ex-boyfriend lived. However, he had an alibi: he was working on the day she vanished. The alibi and a passed lie detector ruled him out as a suspect.

The primary suspect in Niqui’s case is Tommy Swint. Tommy lived near the apartment complex where Niqui’s car was found. He was also known to be very violent and was a coworker of Niqui’s.

Tommy Swint, however, refused to talk to the police. In November 2007, an anonymous tip stated that Tommy was involved in another missing woman’s death. The woman was Tina Marie Ivey. 33-year-old Tina Marie Ivory’s body was found on December 17, 1991. Investigators were able to match the DNA found on her body with Tommy’s DNA. His DNA matched the blood DNA found on the blanket Tina Marie Ivory was wrapped in as well as two semen spots that were on Tina’s jacket.

Police went to arrest Tommy on February 3, 2010, for Tina’s murder. However, when they arrived at Tommy Swint’s house, they knocked on the door and heard a gunshot.

Tommy Swint killed himself. Leaving the primary suspect in Niqui McCown’s case dead and Niqui’s family unable to get the answers they deserve.

Who is responsible for the disappearance of Niqui McCown?

Investigators have been unable to charge anyone with the disappearance of Niqui. However, Tommy Swint, the lead suspect in the case, was found guilty by physical evidence found at the crime scene of murdering Tina Marie Ivery. He, however, killed himself before police could arrest him or further question him.

Who are the suspects named in Niqui’s disappearance?

Robert “Bobby” Webster was named a suspect but was later cleared.

The two men from the laundry mat were people of interest but also cleared when footage showed Niqui made it out of the building safely.

Coworker Tommy Swint is the primary suspect in this case.

What happened to Niqui McCown?

Niqui McCown disappeared one day after picking up her laundry from the laundromat. Unfortunately, she has never been found.