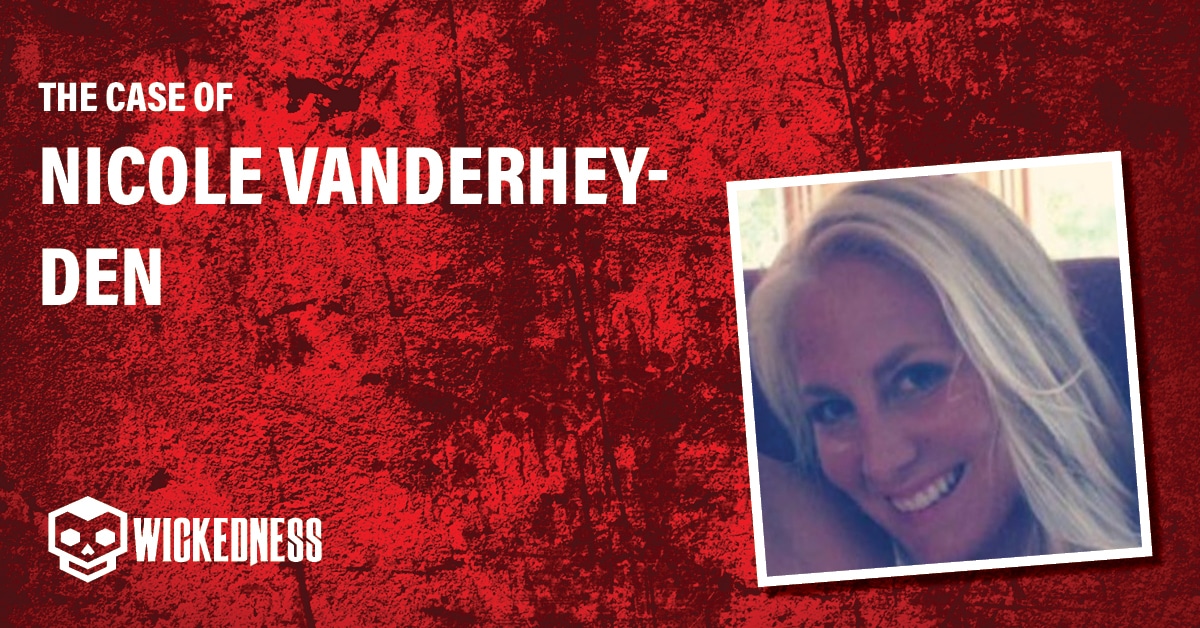 A field three miles from her Ledgeview home

A field three miles from her home

Nicole Vanderheyden, a mother of three, was found beaten and strangled to death in a farm field just three miles from her Ledgeview home on May 21, 2016.

Nicole Vanderheyden was a thirty-one-year-old teacher and a mother of three. She had a 6-month baby boy, Dylan, with her boyfriend, Doug Detrie. As well as two other children from a previous relationship named Mikayla and Tyler. She was described by most as a very bubbly personality and was a responsible mother who loved teaching science to children.

Doug Detrie and Nicole Vanderheyden had been dating for around two months when she found out she was pregnant with Dylan. They were living together and raising Dylan together.

A night out at the Watering Hole

On May 202016, Doug Detrie and his girlfriend, Nicole Vanderheyden, went out for the night with friends. They had arranged a babysitter, Dallas Kennedy, for the night and planned to let loose and have fun. The night started well. They met friends at a bar in Green Bay and had tickets for a Steel Panther concert at a bar called The Watering Hole also in Green Bay.

And then the Sardine Can

Surveillance video from The Sardine Can showed Nicole Vanderheyden having fun regardless. She was dancing and talking to friends. However, as it got later in the night, she became more and more frustrated with Douglass Detrie. Nicole left him several angry text messages, and he replied, telling her he would be at The Sardine Can soon. By 12.20 am, Doug Detrie still hadn’t met up with Nicole and the group at The Sardine Can, and the group was ready to leave. Nicole called him multiple times on her cell phone to receive no answer.

However, when another female member of the group, Angela called he answered. Nicole was angry and confused about why he wouldn’t pick up her calls but would pick up a call from someone else and left the bar. She started walking down the street. One of her friends followed and tried to get her to return to the bar, but she refused. The group watched her walk up the street. She was talking on her mobile phone at the same time. She turned left at the top of the street, and that was the last time her friends saw Nicole Vanderheyden.

Greg drove Dougless around looking for Nicole. They called, texted and Snapchat her but received no answer. Finally, Doug Detrie returned home at 2.40 am, drunk and tired. Nicole didn’t come home the following day and her friends and family hadn’t heard from her.

That same day, 21 May 2016, Nicole’s body was found, nude except for her socks and a pink wristband, by a tree line in a farm field off Hoffman Road in Bellevue. An autopsy revealed two causes of death: Strangulation and blunt force trauma to the head. The medical examiner could not determine which of the injuries came first. The medical examiner determined her body was covered with bruises, and she had 240 injuries; facial injuries, a fractured jaw, injuries to the genital area suggestive of sexual assault, ligature strangulation marks, blunt force trauma. Nicole Vanderheyden was described as unrecognizable and a forensic dentist was needed to positively identify her. The killer had destroyed her face.

When Brown County police searched Nicole’s house, they found a number of items of interest. They found a pair of Air Jordans that appeared to have streaks of blood on them. These were of particular interest to them as the marks on Nicole’s body indicated that she had been stamped on.

Brown County police also discovered blood on the garage floor and in Nicole’s car, leading them to believe Nicole made it home before she was killed.

DNA swabs were taken from Nicole’s body and sent for analysis to the state crime lab.

Two days after Nicole’s body was found, her neighbor informed police that they found some items that might interest them. It was a charging cord and clumps of blonde hair in the garden of their home. The hair had blood on it.

The police also found the outfit Nicole Vanderheyden was wearing on her night out on the 20 May, 2016 covered in blood and dirt along the highway less than two miles from where her body was found. Her cell phone and purse were also discarded in the exact location.

Dough Detrie was arrested and held in prison. However, he was cleared when the DNA evidence found on the items, such as Nicole’s socks, belonged to an unidentified male, not Douglass. The blood found on the garage floor was not human, and while the spot on the pair of shoes tested positive for blood, it was not Nicole’s.

Three months after Nicole’s body was found, the crime lab notified police that they had been able to retrieve enough DNA from one of the socks to run it through the national database. And they found a match.

The DNA matched a man from Virginia named George Steven Burch. Through the use of location regarding George’s mobile phone, the police were able to determine his location at the time Nicole Vanderheyden was murdered. It was discovered that George Burch was at Nicole’s house from 3.01 am until 3.52 am. The data then showed that he went to the farm field just after 4 am, where Nicole’s body was later found. He returned home at 4.22 am.

George Burch was born on February 14th in Virginia, and raised by a local couple after they adopted him when he was one week old. They had a home, were working folks, and gave him a decent basic education. He was involved in sports and, by his own account, was very close to his father but not his mother.

By age 6, George Burch was already nicknamed Big Country because he towered over the other kids.

In 1998, he was tried for murder but found not guilty during the murder trial on all five counts related to the shooting of Joey White, who was a gang leader. Two jurors said that the commonwealth case was sloppy and that there was a lack of evidence in the case. They demanded anonymity because they were afraid for their own safety.

George Burch was also sentenced earlier that year for burglary.

George Steven Burch was arrested on September 7 September with first-degree intentional homicide. He pleaded not guilty and received a life sentence.

Despite DNA evidence clearly linking Burch to the murder, there were other technological pieces of evidence including those brought by the defense attorney trying to implicate Doug Ditrie. Photos on Google Photo of maps of the area where Nicole’s body was found for example. These were largely inconclusive however as there were hundreds of other ariel photos as well.

Doug’s Fitbit device supposedly proves he was asleep at home when his girlfriend Nicole Vanderheyden was killed, prosecutors contend.

“Significantly, Doug Detrie had been wearing a Fitbit device on the night of Nicole’s death, and investigators were able to analyze Detrie’s Fitbit application from his mobile phone,” prosecutors said in court papers.

Who was sentenced for the murder of Nicole Vanderheyden?

George Burch was sentenced to life in prison for the murder of Nicole Vanderheyden on September 7, 2016.

Who was Doug Detrie?

Doug Detrie was Nicole Vanderheyden’s live-in boyfriend. They had a 6-month son together.

Who was looking after the young children on this night out?