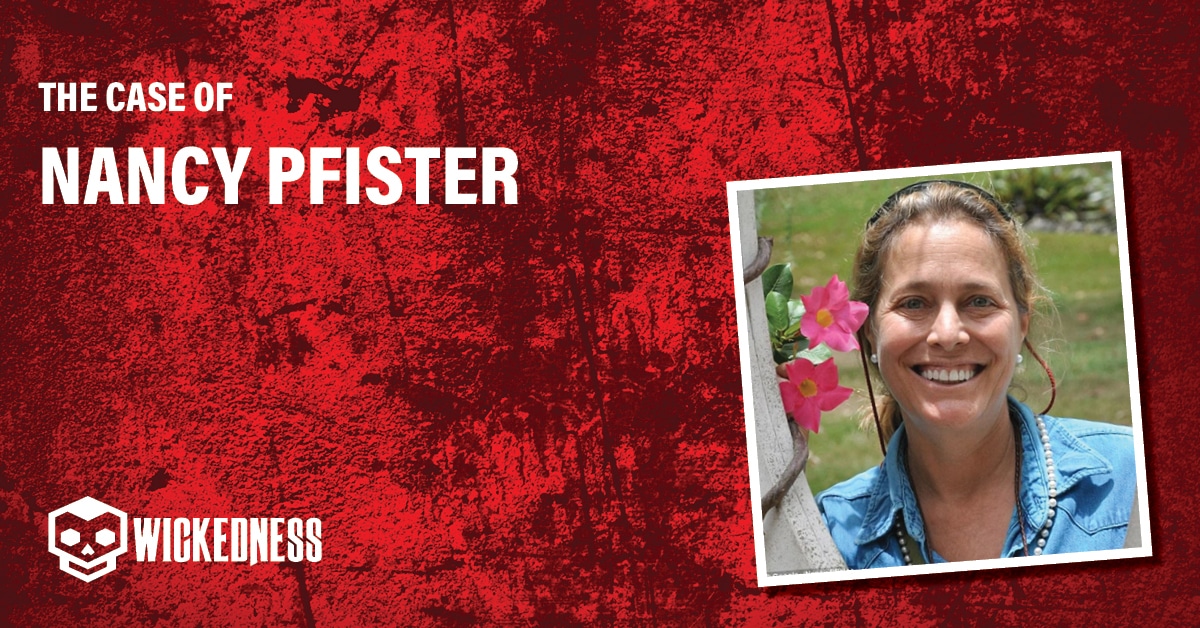 Nancy Pfister- Murdered and left in her closet for days.

After missing for two days, Nancy Pfister was found murdered by a hammer and ax and lying inside her closet. Who could have done such a gruesome crime? Could a 67-year-old really commit such a crime and move the body on his own?

On July 4, 1956, Nancy Pfister was born in Orofino, Idaho, a small city on the north bank of the Clearwater River. She was raised both in Aspen, Colorado, and Basalt, Colorado, and attended Basalt High School. Nancy was the daughter of Art Pfister, who made a fortune when he turned his family cattle ranch into the Buttermilk Ski Resort.

Nancy Pfister’s mother, Betty Haas Pfister, was a Women Airforce Service Pilots (WASP) member in World War ll. She, in later years, flew a helicopter, which she was notoriously known for parking in the family’s driveway.

Shortly before her death, she rented her house to retired doctor William “Trey” Styler and his wife Nancy Styler to help pay off her mortgage. Nancy Psifter abruptly evicted Trey and Nancy Styler from her house and refused to let the Stylers collect their belongings from home.

Nancy’s good friend Kathy Carpenter raised concern for Nancy on the evening of February 26, 2014, when she had not heard from Nancy for two days. When Kathy heard that Nancy had also not shown up to work for the last two days, she decided to drive to Nancy Pfister’s secluded log home in rural Buttermilk, Colorado. However, when she arrived, she noticed no trace of the missing Nancy.

Kathy later told police that she entered the bedroom, saw the bed in disarray, the comforter draped over the side, and the sheets pulled off one side of the mattress. As she got closer to the bed, she noticed a tiny stain of blood spattered on the bed frame. Kathy found that Nancy’s bedroom closet was locked, returned home to get her copy of the key, and then opened the walk-in closet, where she discovered Nancy Pfister’s lifeless body. Kathy called 911 straight away, and investigations arrived to examine the body before taking it to the crime lab. Nancy Pfister had a large gash in her torso, where she had been struck with an ax.

The wounds to Nancy Pfister’s face were later determined to have been caused by someone beating her with a hammer. He decided that the cause of her death was blunt force trauma to the head and exsanguination.

Investigators turned their attention to the mattress, where they believed Nancy had been murdered. When they flipped the mattress over, they found a large pool of blood, indicating that whoever killed her had flipped the mattress to cover his or her tracks. The police believed Nancy had been dead since Monday morning and that she had laid in the closet for two days before Kathy had discovered her. Investigators also believe that based on where Nancy’s body was placed, she must have been attacked by two people. Both carried her to the closet.

Trey and Nancy Styler because their immediate suspects as the couple had been renting her house, and there were no signs of forced entry. Police decided to question both Nancy and William Styler separately. They both denied any involvement in the crime, and DNA could not be used as there were straightforward explanations since the couple lived with Nancy Pfister for two months before her murder. In addition, Trey Styler took and failed a polygraph test, which added to the investigator’s suspicions.

A few days later, a Basalt city worker was picking through a public trash bin when he discovered a bloody hammer, pill bottles with Nancy Pfister’s name printed on them, and vehicle registration for Trey and Nancy Styler’s Jaguar. The city worker immediately contacted the police, who discovered that the trash bin was behind the motel where the Stylers were staying.

Another critical piece of evidence came when investigators discovered a key to the closet in which Nacy Pfister’s body was found outside the Stylers’ hotel room. With such evidence, the Stylers were arrested on March 3, 2014. Kathy Carpenter was also arrested and charged with first-degree murder three weeks later, based on her description of items she had seen at the crime scene that seemed impossible to observe. Kath Carpenter, however, maintained her innocence.

In an interview with police, Nancy Styler claimed Nancy Pfister treated her like a slave and referred to her and her husband as trash. There appeared to be a lot of anger placing a motive for murder on Nancy Styler.

Just under two weeks before the preliminary hearing was set, William Styler made a statement regarding the murder of Nancy Pfister. He chose to take a plea bargain, where he confessed and pleaded guilty to first-degree murder. As a result of this bargain, his with Nancy Styler and Kathy Carpenter would be released. Trey Styler began his statement by telling the police, “I lost my mind, or at least my rational mind. It was me. It was all me”.

Trey Styler then proceeded to describe how the event went down. First, he explained how he slipped out of his motel room while his wife Nancy was sleeping. He then drove to Nancy Pfister’s house to confront her about how she treated his wife when they were renting her home.

He then said, “I stuck my head in the door, far enough to ascertain that she was in fact in bed, and I called out her name again, and she still didn’t respond.” Finally, Trey described the gruesome details of what happened that morning. He told police that he quietly made his way to the bedroom, and while he watched Nancy Pfister sleep, all the rage that had built inside him from the time his health began to decline spilled out of him all at once. He began to focus his anger on Nancy and all of the difficulties she had caused.

He made his way back downstairs and grabbed a hammer and an ax. He also obtained orange extension cords and a plastic garbage bag, which he later used to tie her up. He then described how he struck her in the face with the hammer, over and over again, until she stopped moving. When he realized she was still breathing, Trey plunged the ax into her chest, killing her. He then wrapped Nancy’s body in her bedsheet and multiple plastic bags and left her in the closet.

He grabbed some of her belongings, such as her medication and cigarettes, to make it look like she was gone. He never told his wife, ruling her and Kathy Carpenter out as suspects. As part of the plea deal, charges were dropped against Nancy Styler. As a result, she cannot be charged with the crime in the future. However, the suspicion remains that Nancy Styler may have been involved in the murder.

Many believe that the police were suspicious of Kathy Carpenter due to intense media coverage in the aftermath of the murder. In 2015, Kathy, along with Nancy’s daughter, petitioned the city of Aspen, Colorado, to have Nancy Pfister’s name added to the shrine titled In Memory of Friends of Aspen in Snowmass Village, Colorado. The shrine honors Colorado natives and former Aspen residents, including John Denver and Molly Brown. Her name was added in 2016.

The 67-year-old William Styler was sentenced to 20 years in a Cañon City prison. Trey committed suicide in August 2015 by hanging himself in his cell.

After Bill Styler was behind bars for 13 months, Trey Styler was interviewed by Daleen Barry who was writing the book Guilt by Matrimony. The book is an effort to clear Nancy Styler’s name.

How long did it take them to discover Nancy Pfister’s body after she was murdered?

2 days. Nancy’s body was found two days later in her closet in her home.

What happened to Trey Styler?

Trey Styler was sentenced to 20 years in prison after he plead guilty to the murder of Nancy Pfister. He committed suicide in August 2015 by hanging himself in his cell.

When was Nancy Pfister murdered?